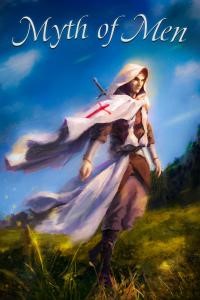 Gaming isn't a way of life. With reality reduced to rubble and ash after a nuclear war, these fictional worlds of entertainment now serve as reality to many survivors. And, amidst all the addicts and try-hards, one person rises to the top with ease.

Known as Hiiro, Henry Johnson is infamous for quickly dominating every game that hits the market, and departing from them even more quickly. It's no surprise when he's offered a chance to beta the world's first VRMMORPg: The Myth of Men.

But is there something sinister hidden underneath the facade of what promises to be a fun game?

Please note: the below is true, but due to my continued haitus, it's on the failed pledge list as of now with my other series.

This fiction is signed under the 'The Pledge'... Some internet message in a forum about not dropping or giving a rushed ending in their fiction, otherwise meet the wrath of letting RRL mod Vocaloid have 'fun' with the fiction's description. So mainly for the sake of my fiction due to said wrath, I'll see this fiction through.

Credit for winRoot for doing my commissions.

Mature language: 15+... If you ignore this it's your choice, not mine. Enjoy~

Beware what you read!!! (in this review., since there are spoilers)

This is for the review swap. Read at your own risk. Spoilers are here. Without doubt! MWahahahahaha~

Also, this is my opinion from what I've read till chap 8. It seems something more awesome happens in vol 2, but sadly, I have to read it later. OTher reviews to do!

Now, let me warn you, I won't hold back on my review. I'm gonna point out all the cons, without remorse. It is because I want you to improve, and not because it's a hate review. Please don't hate me Oldy!

Then, let's begin shall we??

Style: The author uses a typical first person viewpoint, alternating between characters from time to time. No complaints here. Except for Doki. Which I'll get to in the Character section. A solid 4 stars, since it's not exactly 'amazing' it is what it is, a normal style of writing.

Story: This is something that confuses me. According to the description, they're supposedly stuck in the game. But as far as i have read, they don't give off a 'I'm stuck' vibe. IT just seems like a couple of people enjoying a game, to be honest. 'Normal' people would feel nervous, at least. That, and I haven't noticed any mention of them being unable to log out. Might have missed it, but just saying. The natural attitude that people should have is missing, and I think that's a negative. I think.  UNLESS they don't know they're stuck. Which is strange... 3.5 stars. Since there are a lot of .... unexplained stuff. Might be explained in the future, no idea.

Grammar: Not perfect. Mistakes are frequent, almost. But it's not to the level of :WAS THIS DAMN AUTHOR SLEEPING WHEN HE TYPED THIS>?!!?! more like - Oh, that might be wrong... This could be fixed. 3.5 stars.

Character: Solid characters. Nicely fleshed out. They have consistent personalities, each having their own uniqueness. No major complaints, except about Doki. It might just be me, but Doki's initial attitude from chapter 1 changed a lot. I can't quite put my finger on it, but it's there. Maybe because he talked less. Another thing is, the new Doki is ... absolutely amazing. I really like his aloof and uncaring attitude, not caring about others. Reminds me of Hiiro from Konjiki no Wordmaster. 4 stars.

The combat has been cleaned up by... a LOT. Much better now, GJ oldy.

Basically, the story is quite good, but it needs quite a lot of improvement.

I hope you don't get ticked off Oldy. I just want you to get better at this fic. It has a lot of potential, just needs to be prodded a bit. Hope you can make it even more awesome!!

I don't read many VR stories...

But I really enjoyed this. The characters specifically I think are great. Some people might not like the main characters personality but I think it's fairly realistic and have met similar minded people who are avid gamers. You say very early on that you were inspired by stuff like Log Horizon and I can see many similarities - so if you like that then you'd probably like this fiction. I also found Volume 2 to be very interesting despite not delving too deeply in the VR world.

The main critique I do have though is that the story is indeed similar to a lot of other VR novels and grammar at times is off but those are usually minor issues. Stylistically your writing is interesting to read and characters are relateable and realistic.

Hope to see you continue writing this story!

Ok at the moment that i am typing this review i feel so bland just like my title.

I saw the prologue of this novel and this is actualy one of the first VR novels on royalroad that i began to read.

VR novels arent my cup of tea for many reasons but i tought i should give it a shot (all the more with the doom scenario of being stuck in a game).

To elaborate on this the skills of the characters are ignored they have awsome classes but no hard facts are given.

We know the mc can bind peeps but does it have a max x peeps he can bind how much dmg does it do how much AP does it uses.

What are his stats how much does he gain each lv the mc just suddenly becomes lv 8-11 and some time later lv 19-21 because the side chars asked what lv everyone is otherwise we would not know(the gear is also glossed over potions get used but we only learn of this fact after the deed).

Everything is so boring and straight the characters have personality but a certain degree of thrill or danger would be nice.

The character classes were very intriguing the first time i saw them i was like WOW this is gonna be epic, just for them to be downplayed and ignored.

The main char just uses bind wich even attacks his friends -.- this mechanic can be ignored as the hp he leeches he can just give back (if it isnt 1:1 then yea).

So 8 chapters of boring dungeon crawler and a random plot of 4 guys screwing 50 peeps in a cave for the most retarded love plot ever.

To suddenly be cut off with 8 chapters of a diffrent POV when the only interest i had was to see when the pace will finally pick up but no obviously a cliffhanger of 8 chapters is in order.

I tryd to read the side chaps but i was like why even try its supposed to thicken the mystery and only when you finish the 8 chaps will you get some questions awnserd meh its generic at most.

2 stars for good writting and the ability to actualy make a story but the choices made and the obvious use of preeching about his opinions tru his characters make for a very annoying novel.

Its not about disagreeing with his opinions its about just not caring if i wanted to have a debate with some child who thinks he is the center of the world with superior logic then i would go to a freaking pre school.