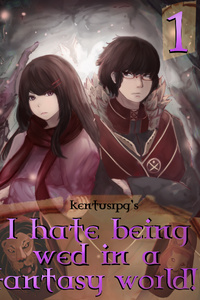 I hate being wed in a fantasy world!

Remove Ads
Next Chapter
A note from kentusrpg

Please vote on TWF, doesn't require an account or more than a moment.

"Phew..." Exhaling, I wait lying on top of a cliff, while observing an unusual beast. It walks on four spider-like legs, has a chimp-like body on top, and with two muscular gorilla arms attached. It is a Monkey-spider. They're as large as horses and live in packs — this one is patrolling the perimeter.

I have my [Stealth]-ability active, so it won't notice me as long as I don't move. It’s thanks to the [Camouflage]-skill. [Camouflage] changes the color pattern of the user and their equipment to match their surroundings, but it consumes a lot of SP (Stamina Points). The problem is: if you move, it won't change again to match your new background.

At the moment I probably look like grass and rocks. Since monkey-spiders don't have a keen sense of smell, it should be enough to hide my presence.

My name is Katsuragi Kenta and I'm a [Scout]. At least, that's my [Class] at the moment.

After an incident, my classmates and I were transported to another world by a suspicious being to save mankind - or something like that.

We got some special kind of powers to do so, but before I get into details: It's similar to video games, especially MMORPGs. Since I'm a gamer, I didn't have too much trouble figuring this out.

Because I'm a [Scout], you probably think that I'm scouting for my classmates, who have classes like warrior, mage, hero and such. If you do so, you're wrong.

There are no classmates lying in wait. It's only me, a spear, and a pack of monkey-spiders. I counted six in the pack so far.

At least it isn't my goal to kill them all.  I only want to get into their cave to loot it. Fighting them would be too inefficient, so all I can do is wait.

Patience. Only need to wait until the monkey-spiders leave to go hunting.

Getting this close was lucky enough. When the monkey-spiders leave the cave, I can simply climb down and raid it. I don't know if there is anything valuable inside, but I do know that monkey-spiders like to collect trophies. Even though most of it may be junk, at least some treasures might be inside.

…I'm getting hungry… My throat is as dry as a desert. Numbness and pain are all over my body, since I was lying so long on hard ground. The sun is shining on me, so I’m sweating like crazy. If I don't endure it, the monkey-spiders are sure to detect me and then they'll kill me.

But at some point the diurnal monkey-spiders will go hunting. Since I already waited for four hours, they could go at any moment.

About an hour later, the monkey-spiders finally gather and go hunting. I wait ten minutes, and finally I start moving my muscles for the first time after several hours.

My status says that I have the [Sore]-condition and my [Attributes] are decreased. With the [Starving]-condition, I shouldn't be climbing down cliffs, so I eat and drink first.

After another ten minutes, I'm ready to descend. I take a torch out of my backpack and light it up. Torches are bad at lighting things up compared to modern means, but I have the [Scout]-class, so I have the [Perception]-ability and its [Darksight]-skill.

Even though it isn't on a level to actually see in total darkness, it lets me see clearly to fifty meters (about 54 1/2 yards) with any sort of light source. Even a matchstick would be enough.

The cave is full of webs and I guess it smells like monkey - not that I actually smelled one before. Even though the monkey-spiders are out hunting, I shouldn't get careless. Maybe a few were left behind. I have never personally fought with monkey-spiders before, I know about them only because someone told me, but they seem to be dangerous. It would be better to try a single one first.

Exploring a cave isn't exciting. You see rocks, more rocks, and every step you take echoes. That makes it harder to distinguish noise, making you an easy target for mobs, that lurk in the darkness.

Unless you have the [Perception]-ability and its multitude of [Skills].

Quickly, I drop the torch and take the spear in both hands, while turning around quickly. A monkey-spider has tried to sneak up on me!

With a thrust I force it back a bit, but its movements are really weird. Having four spider legs makes it quicker than it looks.

Nah, it just looks fast. It being larger than me would normally give me the advantage in mobility, but monkey-spiders seem to be able to move in all directions and in short speed-bursts.  Even though the chimp-like upper body with the gorilla arms isn’t that fast, its erratic movements make it harder to get a grasp of its speed.

It is much like a fly.  A fly isn't that fast, but as it moves in an irregular manner, you have a hard time following it.  Even though the monkey-spider can accelerate for a short bursts of speed, that doesn't mean it's actually that fast.

How do I know that?  I use the [Perception]-ability’s [Focus]-skill. Does knowing that help me? Probably not.

The monkey spider charges in my direction and throws a punch. But I’m able to dodge it. Looks like I can see through its movements.

At the same time I realize I will have a hard time getting a good hit in with my spear. My [Strength]-attribute isn't that high either, so the damage won't be a lot. I'm a [Scout], after all.

Maybe I should have bought a bow. Unfortunately, they are expensive and need arrows, which aren't cheap either. Either way, I should have totally bought one, even though I'm currently in a position where I won’t be able to use it at all.

Dammit! Concentrate on the monkey-spider!

It may have its speed-bursts, but I can probably outrun it.

Without hesitation I run back to the cave entrance. The monkey-spider tries to catch up, but actual running is better than those speed-bursts in this case.

I already see the daylight, but then I hear a strange noise and look back. A white ball of goo is flying straight at me.

Of course, it’s a ball of web. Should have known that.

I throw myself to the ground and use the momentum to make a roll while still holding the spear. Training that move was totally worth it. The web-ball flies above me, but the monkey-spider is about to catch up.

Now I have it!

I call the menu, choose the [Change Class]-option, and take the [Pikeman]-class.

With a grin I stand up and lift my spear.

I feel my muscles growing and initiate a [Spear]-skill, [Speedthrust].

Before the monkey-spider realizes what happened, I have already sunk my spear deep into its chimp-like body, right into its heart.

It falls to the ground, lifeless.

Monkey-spiders are dangerous. Note: Never fight more than one for now.

I change back to the [Scout]-class. Even though I would rather stay a [Pikeman], I lose my [Perception]-ability with that [Class Change], and therefore would end up dead before noticing the next ambush.

That was the reason I retreated back to the sunlit entrance, as there I would be able to actually aim my [Speedthrust].

Now it's time to resume my search. Luckily, there aren't any monkey-spiders left.

At the nest I see some items which might be interesting.

I take a bag out of my backpack and shove anything in that isn't clearly junk and leave the cave.

An hour later, I can finally take a breather.

I retrieved some coins, potions and jewelry. And a knife.

When I focus on one of these items, I can see names and descriptions there. For example:

Not very helpful. At least unless I equip it. When I do it then becomes:

Hey, it’s actually pretty good. It has more attack power than my spear, but since it has a short range, I’d better use it as a secondary weapon.

After I identify an item, I can see its stats whenever I look at it without needing to requip it.

If I don’t identify an item, I have no idea what it does and how much Newgold I could get for it. This puts me at a disadvantage while haggling, and there are cases where you would overlook a rather useful item that you may want to keep for a while. This steel knife is a prime example.

So I go through the stuff I found and look at it. Coins and other things you don't have to wear can be appraised without further steps.

Unfortunately, the jewelry had to be worn one at a time. Since I don't have my earlobes pierced, I can't wear any earrings. Here I’d have to ask a merchant, who would surely try to trick me to sell it at a lower price.

"Phew." There are a lot of rings. You can benefit only from two rings at the same time, one on each ring finger. That’s the reason why you have to put it on your ring finger to identify them. If you put a second or a third ring on the same finger you won’t get any benefits, nor be able to identify them... Game logic.

I put the rings on in pairs, so I would lessen the time needed to identify them. Most of them aren't too valuable, even though some have gems or are made out of silver. But most were copper and rather cheap.

I have one of these copper rings on my left ring finger, it have an engraving of a male lion, so I thought it might be worth a bit.

But the stats are odd.

My mind goes blank, and for some reason my body feels heavy. Before I get emotional, I should check my status.

[Cursed]-condition. What exactly does this curse do? I see a pop-up screen, which tells me everything:

This is the first time I’m even confronted with something like a magic item and for some reason, it’s a cursed one. What are the odds?

I realize that I'm as good as dead. I was often confronted with deadly situations, but this time, there is a certainly to it. Without even looking at the other stuff, I lay down and rub my temples.

Just how did I get into this mess again?!

Please vote on TWF, doesn't require an account or more than a moment.

Support "I hate being wed in a fantasy world!"

Bio: At day a child care worker, at night sleeping, kentusrpg isn't aiming for much, but a bit of a fun past-time. But somehow the hobby got way more serious than originally thought...