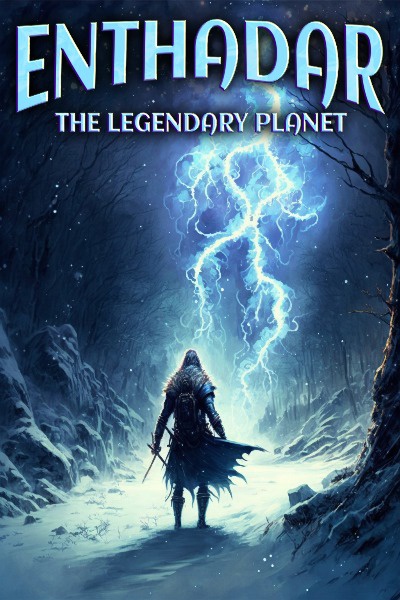 The party of hunters was let in by one of the orc guards. They entered the village, walking straight through the center of it, as a few orcs gathered alongside them. Among the tents were a few simple wooden houses.

In the center of town was a giant skull with furs inside draped over the openings. Two orcs walked out of the open jaw of the skull. A woman with a staff ordained with feathers and a man with a large black sword on his back.

Erevan assumed the man with the large black sword was Warlord Graw’aud. His green skin was tinted gray, he was a foot taller than any other orc, and his bald head seemed unnaturally thick. Like his skull could crush a man with a headbutt.

Behind them were seven orcs standing at attention. They were obviously the children of the Warlord Graw’aud. While they varied in height and age each orc struck Erevan as odd; two each had one horn, one had longer arms, the youngest had incredibly sharp teeth, one had a blue nose, one had elven ears and a thin frame, while another was obviously an older teenager yet was half the size of the other grown orcs.

The shorter orc and Erevan made eye contact as they sized each other up. The woman with the feathered staff slapped a cupped palm on the side of it causing a rattling sound. Erevan shifted his attention to her.

“You are in the village of the Frostblood Clan. What is it you seek?” The woman with the staff spoke in Old Pod.

“Information. We seek to find a pack of wolves.” Erevan spoke as he lowered his head in respect.

“And what do you have to barter for the information?” She asked.

“I’ll stay here for three weeks as I build a ballista for you. One of these.” Erevan pointed to his own ballista, having not known the orcish word for the weapon it was the only one he spoke in common.

“If you are to hunt these wolves now we have no guarantee you will return and uphold your end of the bargain.” The woman narrowed her eyes at Erevan.

“Then send one of your own. Someone to watch us. Maybe that son of yours.” Erevan pointed to the shorter half-orc.

“But he is his son.” Erevan gestured to the man with the black sword. “While you are the Speaker of the Frostblood Clan, that man is the Warlord. And giving his kin challenges is important to judge their worth.”

The orc warlord grunted and nodded to the woman. Erevan had seemingly gained the approval of the man. Though what that all entailed he still was not sure of.

“The terms are not acceptable. If one of us goes with you they are in danger.” The speaker pointed to Erevan. “One of your own will have to stay to be fair.”

Erevan nodded in respect and turned to his party. Kalile was still translating to the others. They did not like what they were hearing.

“What!” Jaeger looked upset. “We can’t leave one of our own with these savages.”

“A handful of them understand you.” Erevan crossed his arms. “They speak the common tongue.”

“Who would even stay?” Celise asked cautiously, looking around the camp.

“Well, there are two obvious choices,” Erevan said." Kalile who can communicate with them. Or Jaeger because the rest of us are supposed to be gaining experience hunting.”

“It has to be me.” Jaeger said, frustrated. “We estimated over fifteen wolves and we need to get the population closer to ten. So kill five to seven of them and then leave the rest.”

“You can count on us.” Erevan agreed with Jaeger.

An orc-guard gestured to the oldest of the group. The hunter stepped to the side of the party joining the guard. As he did so the half-orc from among the seven children of the Warlord stepped forward to join the young hunters.

“The Wolfpack stays in a cave southwest of here. Their alpha is a direwolf and many of them are interbred. They have been at our walls, testing our defenses.” The speaker said in Old Pod.

“Thank you for the information,” Erevan replied with a slight bow of his head.

“May the Warrior Spirit be with you.” The speaker added as Erevan and the party turned to leave.

The three hunters and Erevan stopped just outside the gates of the orc camp. It felt strange to leave Jaeger behind, even if Erevan hated him, stranger yet that the Burkwood could tolerate any of these hunters. Though, the orcs could be turned into true allies for him, and so Erevan turned toward the half-orc tribal.

“Revan Elkwood.” Erevan used the fake name he had given Broxton.

“Are you fluent in common?” Erevan asked.

“No, but I study very hard,” Ozarrik replied.

“Well, you can always ask myself or Kalile for a translation. Kalile is the mighty orc huntress in our group. The dwarf is Darton and the other human is Celise.” Erevan pointed to each member of the group.

“I have never met a dwarf,” Ozarrik said. “Is it true you can make mountains into cities?”

“Personally I doubt I could. But many of my people are skilled enough to do just that and for the city to spread far below the surface.” Darton answered.

“I would like to see a dwarf city one day.” Ozarrik smiled.

“Then we have a mission for another day.” Darton smiled.

The group talked as they walked around the keep and toward the southwest where they had once again picked up the trail. Erevan wanted to feel safer with his comrades, but he couldn’t allow himself a moment to relax. He didn’t know how these hunters would react to him with his helmet off. And he didn’t want to ever find out.