Heya! Can you believe I've been doing this nonstop for more than a month? Maybe I should take a day off sometime. Oh well, I'm having fun right now. But know that I might disappear for a bit whenever Elden ring's DLC inevitably drops. (°▽°)

Wouldn't it sound better without the 'and' ? Maybe I'm a bit biased. 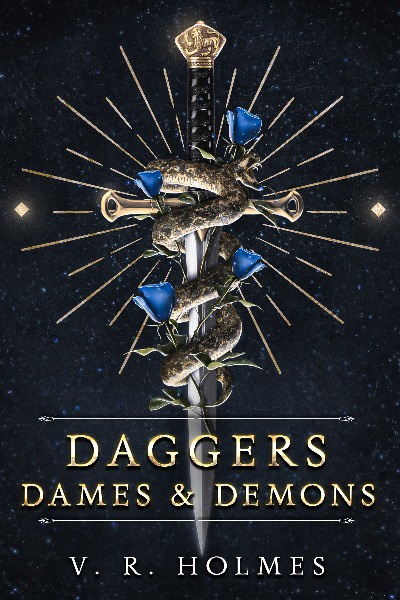 I figured it was coming but it still hurts.

Up above the water, mana was fluctuating wildly, Orvod had not been waiting idly while she prepared her next move. And with the man’s annoying tendency to create deadly constructs out of thin air, it was better not to leave him unchecked for too long.

The hollow grief would hide underwater for a bit, Sofia ascended, localizing the very obvious mana shape of the trident, she jumped for it. As she flew out of the water, hundreds of stone spikes all turned to face her. She pierced through the air coming closer and closer to the flying trident. The stone spikes launched at her in waves, most bouncing off her scales and resilient skin, some managing to pierce through. The spikes didn’t slow her momentum as she closed in on the trident. This was still all according to plan.

Orvod tried to move the trident out of the way but it had been stationary and moved far too slow, such a large object needed some time to accelerate. Sofia reached the gigantic stone weapon, she grabbed it by the tip and used her sharp claws to scale it, climbing to the top of the hilt. Her body was damaged from the spikes, one had lodged itself in her left leg, she couldn’t use [Regret] anymore. The legs and back had taken most of the damage from the rain of spikes.

Sofia jumped from the trident, straight towards the giant bell above the hero, at the same time, the Hollow Grief emerged from the water, right in front of Orvod and aiming straight for him.

The stone mage stopped the undead's punch with his layered stone shields, not even triggering a lotus. But he also fell victim to the undead’s passive skill, Orvod had seen something that had first shocked him, then threw him in a violent fit of rage. Countless spikes appeared and stabbed at the already retreating undead. During this second where the hollow grief occupied all of the Hero's attention, Sofia struck the bell.

Augmented by the skill in her right arm, her punch packed more power than ever before, the bell was completely pulverized in a single hit, reduced to dust. A system notification followed.

[Suffering] : Your next attack will deal additional damage proportional to your missing health. Costs 10000 mana per cast. Right arm blood vessels must be undamaged for the skill to correctly resolve.

That got the hero’s attention right back on her as she fell down. Every remaining lotus sprouted open under his command, ejecting deadly petals aimed at Sofia. She had barely enough mana left and used [Misfortune] for the second time. But it didn’t work, half of the mana gone just like that, the skill had failed, her right leg was already too injured.

She ordered for the undead that had returned underwater to jump out and kick her. The undead, who in Sofia's eyes was still looking like a small blonde girl, flew out of the lake right under Sofia. When it reached her height, it kicked her away from the petals’ path, taking the brunt of the attack instead.

Sofia plunged into the cold water once again.

Chunks of stone battered the water all around, the petals’ debris. Nothing was left of the undead creature.

Waiting for some more mana and health to regenerate, hiding at the quiet bottom of the lake, Sofia primed the skill in her left arm. It was the only one she couldn’t use until now.

One hit. No more lotuses in my way. The shields the undead broke are all reformed by now. Trident is revolving again, ready to strike. He’s preparing something else I think. [Misfortune] is likely good to go again. Just a bit more mana…

Uh? More mana. I have more mana! How… How did I not think of this!

Her feet firmly planted in the lake’s depths, Sofia raised her right hand.

Nothing happened for a second. Then a spark, which died down as fast as it came. Because I’m not mid-air? She couldn’t see how that would stop her.

All the mana that should be coursing through her veins without a thought thanks to the system’s help, she had to manually control instead. The waves of mana began rushing inside her whole body to the crux of her hand. It was a feeling she knew all too well.

Come on! Come on!

The sparks became more frequent and powerful, but the lightning wouldn’t form. Could she not use it underwater? The mana charged water wasn’t reacting like how water would. It didn’t boil or evaporate, it looked like it wouldn’t even let electricity through all that well.

Like a miniature star lighting the bottom of the lake, a small bolt of lightning took form in her hand, twisting and crackling, growing longer and longer. Its mere presence sent shockwave after shockwave through the lake.

Let’s gooooooo! Who needs the system! This power is mine! Take this, flower man! This one’s for Fox!

Aiming up and above, she let the rampaging bolt of plasma loose. It ripped through the dark waters of the lake, completely unhindered in its course.

At the same time, she dashed up herself, following the lightning spear. Nearing the surface, she sensed the skill crash on the hero’s stone shields. She could also now detect thousands of small new mana signatures, spread around everywhere above the lake's surface. More stone weapons.

Finally out of the water, Sofia flew up though the explosion of her own skill, it couldn’t hurt her demon form. Piercing the fire and the stone shrapnel, her momentum carried her up in the air like a cannonball. Not a second later, out of the explosions and smoke, she had almost climbed the seventy or so meters altitude to where the hero floated on his cube. He was only a few meters away, and he hadn’t gotten time to reform his stone shields, he was wide open! An unprotected target floating on a lonely stone cube.

Eight perfectly square cubes of stone instantly appeared out of nowhere. They weren’t formed by mana, which would have taken some time.

The cubes sprang in her direction. This was the end. She would no doubt die from the impact. The stone needles that had been spread all over the lake had also come to life to surround her and stop her ascension, sealing her fate.

As the cubes sped up, the hero looked at the horizon with a satisfied air of unchallenged superiority. Yet another flawless victory, he probably thought.

His eyes widened in shock, his face contorted, his whole body spasmed, suddenly he couldn’t breathe, his leg was in pain. To his surprise, a cut off demon arm had planted itself firmly in his left thigh. A flowery stain of red was growing on his robes, spreading from the heart.

He looked down one final time to see the demon, further down, who had already been missing its tail now also missing an arm. It was limply falling toward the lake, surrounded by his own trusty cubes that had been about to crush her, and that were now plummeting, like the simple chunks of stone they were.

He could only powerlessly endure, as his vision blurred and his health points reached zero.

This one is for my sister.

Like a puppet whose strings had been cut, Sofia sank to the bottom of the lake. She never saw the next ephemeral notification from the system.

I know some readers wanted a flashback. But come on, who has time to have a flashback in the middle of a battle? I like my tropes but that's just too much.

So it's in tomorrow's chapter instead (｡•̀ᴗ-)✧