Ah, by the way, shoutout to _Fowl_'s : Casual Heroing

I've been told to MC is a baker and as a pastry and bread enjoyer myself, I can only approve of this career path 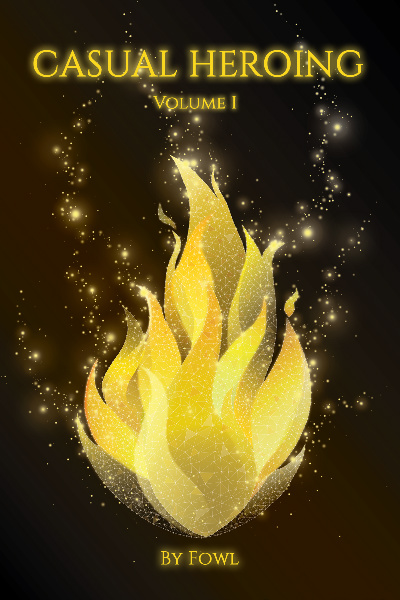 The ritual’s instructions were quite simple. The basics had, after all, already been laid out in the pages before the skeleton summoning ritual.

The 'Sabbath of the hollow heart' had been inscribed in gold in the back cover of the grimoire, and Sofia had very vivid memories of the mad thing. A few diagrams illustrating the ritual circle and the process had accompanied a dozen lines of explanations.

‘The sabbath is to be conducted at night in a place of abundant mana.’

‘The ritual circle is to be formed with human skulls.’

‘The necromancer is to offer the freshly hollowed out heart of a willing and knowing sacrifice.’

‘The sacrifice must not be of a level beneath that of the necromancer.’

‘The sacrifice is to carve out their heart themselves, under no external influence and place it on the pedestal.’

‘The sacrifice has to die.’

‘The ritual heart must absorb the essence of nearby undead creatures.’

‘The ritual heart requires a million levels worth of such essence.’

‘Upon complete absorption, the ritual heart will beat again.’

‘The necromancer is to consume the ritual heart raw.’

‘The ritual heart must be swallowed while the necromancer falls to their death.’

‘The necromancer’s violent death shall complete the ritual and initiate their rebirth.’

‘Thus will be born…’

The princess’ delicate hands placed a skull in between two others on the dusty floor. Taking a step back, Sofia checked the ritual circle one final time.

Am I really about to do this?

There are so many ways this could go wrong.

Her mind went back to Kuli and the strength of someone at level 299. Despite heading straight for the dungeon when she saw the opportunity to conduct the ritual, Sofia had been racking her brains to find a better way to handle the stone mage Hero.

However, no matter what shenanigans she theorized, nothing could make up for the gap in power. It turned out Duke Armand was level 241, which was already impressive, but also a whole league below what they needed. Each trial, like this one, represented a large growth in power; from Kuli’s own words, each passed filter was ‘an exponential growth’ for the person.

Each trial only served to increase the gap in power. For a level 99 person to somehow kill a level 100 plus wasn’t so uncommon. For a level 199 to defeat someone at or over level 200 was already an almost unrealistic goal. For a level 249 to beat even a level 250 fresh out of their trial…

Kuli had explained a lot of things in detail, prompted by Alith’s incessant questioning. Enough for Sofia to estimate that in this case, the duke’s chances at winning were right about none.

So the only good option she had was the ritual. Of course she could also give up on everything, throw the seal away and go hide alone. Waiting in the middle of nowhere for the storm to pass. But could she really? If they managed to track them all the way to this remote dungeon... Then it wasn’t hard to imagine that she would be long dead if she tried something so simplistic like hiding in a forest.

She realized she was unknowingly trying to buy herself more time.

As she was still half dazedly staring at the skulls, the earth rumbled. An earthquake?

No. A stone mage.

As long as she could think back, there was one line of thinking that Sofia had developed that got her through all of her toughest times. Dumb as it was, it gave her the drive to keep going forward. It was one, singular, almost magical sentence she would repeat in the back of her head, obsessively, over and over and over again.

Do what needs to be done.

She was really thankful that she knew human anatomy rather well.

I only have one try. Can’t screw this up. Break the ribs, avoid the lungs, cut out the heart. No stopping. No faltering. Remember to pull the knife out with the heart.

Alright Sofia. You can do this. Do what needs to be done.

Her sweaty palms grabbed the long dagger she had requested from Fox. She found some solace in the fact that at least, it was extremely sharp. Pointing it at her chest, she did her best to take one last slow inspiration and braced herself.

Sofia regained consciousness to the sound of her necklace consuming itself in a blue flame, leaving behind only dust.

She couldn’t move yet, nor feel anything, and this was good news. She was thankful that the pain had stopped. Physically unable to avert her gaze, she watched in horror as the gaping, mangled hole she had carved herself writhed around. As if what was left of her own flesh turned into a million maggots, madly expanding to fill the gaps.

She would probably have a hard time mentally recovering from the experience. At least that wasn’t my real body…

Truth be told, the Princess’ modest attributes had made the process a decent lot easier, for what that was worth. And it was somehow comforting to know that the oozing, darkened heart currently sitting atop a cracked stone pedestal wasn’t actually exactly hers.

Sitting in a pool of her own blood, she gradually regained control of her body.

The ‘ritual heart’ hadn’t waited for her to do its thing. It was already absorbing the ‘essence’ of all the dungeon’s undead. It squished and squirmed on the pedestal, producing wet suction sounds.

To reach the next step, a million levels of undead essence was needed. Since every undead past floor five was at least level 100, as long as the whole abyss was occupied by more zombies, there would be enough.

Just ten thousand zombies would suffice. Just floor five had to be home to at least a few hundreds. And looking down at the abyss and the sections of stairs and bridges across it, there were many, many more floors.

As the heart slowed and then stopped, Sofia held her breath. Her own, newly regrown heart, was beating wildly. Did it fail?

There weren't enough zombies here after all?

Or did I do something wrong?

A strong, singular beat was heard in the silent dungeon room. The sound rippled and echoed, powerful and domineering. No. It wasn’t a mere sound, it was a shockwave. Space itself rippled in its wake.

No time to celebrate.

The short earthquake she had felt before starting the ritual had occurred multiple times, becoming more and more frequent. As the ritual heart finally decided to beat, the mild earthquake was becoming constant. As if the planet itself had been angered. The Hero’s coming.

Sofia grabbed the heart, and, without looking down, took three long steps before jumping off, straight down into the dark abyss.

The Duke’s group had been coming back from the floor below, rushing up the stairs to check on her. Too late. They could only observe her fall.

Sofia’s gaze crossed the duke’s. She was already chewing on the heart.

Before falling too low, Sofia saw Nyse collapse on the stairs.

Oh thank god he didn't jump after me. Maybe the sight shocked him too much. Or was the heart interfering with his skills? I'm pretty sure he can fly.

Past this last distraction, she focused on ‘consuming’ the heart. Clearly the ritual had changed the thing already, and it couldn’t even be called a heart anymore. It was absolutely disgusting, and the fall didn’t help, but somehow, she managed to rip through the fleshy ball and swallow it down during the fall.

Although everything was black from the lack of light, feeling the rancid air pushing back against her, she could tell the ground was almost there.

This can’t hurt more than what came before.

And it didn't. For the second time in less than half an hour, Sofia died.

Lost in complete darkness, she didn’t feel a thing. It was as if her thoughts were all that was left of her.

Am I dead? Like really dead? Can dead people think? The first time felt more like passing out. The ritual must have actually done something. Is it just slow to complete?

I’m really going completely crazy… But what choice do I have… A level 299 stone mage. If I don’t go this far won’t I end up as a human skewer on a rock pile?

Even if the ritual works as expected, can I even compete, as a level one?

Worst case I should at least be strong enough to try to escape. Thinking back on it, the additional task of taking revenge sounds very easy compared to surviving this…

Can I still see my status?

I just found a cure for aging is the good news.

The previously missing name appeared while she was taking in the weirdness of her status, accompanied by a system message.

[Congratulations, you have received a new name!]

Followed by a peculiar second line :