This author's profile picture is a cat. Yeah I know, maybe my cat ch phrases are getting a bit weak. But I still want to help everyone else get the exposure they deserve for their hard work. 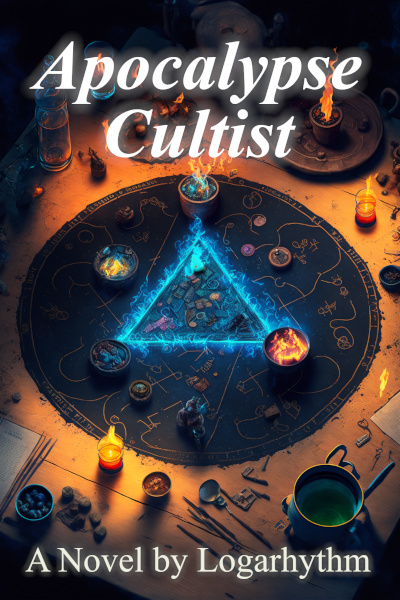 The thing floating in the center of the hall didn’t make a move for a few more seconds. Sofia tried her best to calm herself down.

[Bearing so many wills]

[A most intriguing ‘Saint’]

[The fate is yet undecided]

She focused on every word like her life depended on it, because it did. She tried to answer but it was hard to even breathe. The whole world was swaying in rhythm with the tremors twisting the Archangel’s body.

When the last message appeared, the being of light disappeared. Leaving behind a dark room and three doors inscribed with glowing scriptures.

Wh-… Maybe it’s better not to think about it. Focus on the trial.

The tranquil tale of a lost letter

Knowledge is in reach.

Being lost is but a mindset

You shall find the way.

There is no escape

First one seems like a safe choice, if the text is to be trusted. Knowledge is in reach but knowledge about what? Is it related to [Way of the Fool]? Hmm… Second door is about being lost… I’m already lost enough… Third is, uh, straight up scary. No escape…

She thought over the pros and cons of each door for a while. What it looked like was that each door offered a different trial for a different reward. Kuli said nothing about a situation like this…

Finally she came to a decision. She braced herself and reached for the third door.

The Archangel’s first words were that I'm bold. This can’t be a coincidence. Right?

As soon as she touched the door, Sofia’s vision went black.

Sofia woke up kneeling in a throne room, facing a seated old king looking down on her. Two knights were holding her arms behind her back. Her mouth was sealed by a strange magical gag that prevented her from making any sound, as she found out when she screamed in pain. The knights weren’t being gentle at all. She tried to resist but she was powerless in their grasp. She could only endure the pain.

She tried to use her skill, but nothing worked.

There were many more people in the throne room, knights, guards, nobles, priests, all kinds of important people. Not one of them didn’t look at her with contempt.

Well no, there’s an exception, that girl crying in the tall man’s arms isn’t looking at me, I guess. Is he a prince or something? Ah. Everyone looks even more mad at me now?

The graying old king frowned. He let out a sorrowful sigh. “Aurelia… What were you thinking… Stealing Ellen’s seal wasn’t enough? You wanted to take her life as well? I have been lenient in consideration of your father’s death but I cannot ignore your actions any longer!” The old king’s voice was shaking, his eyes were all over the place through his speech.

That’s a lot… Who’s Ellen though? Oh, got it. She wasn’t even crying for real, was she? That’s quite the ugly smirk she has on her lips.

The king buried his wrinkled face in his hands, then sighed again. He shook his head and regained his previous royal composure. “Lock her up in her room.” He ordered the knights. But no one moved.

Everyone in the room was waiting for the king's next words.

His face fell, his colors were leaving him, the old king closed his eyes and sighed yet again. “Princess Aurelia Grandcourt is to be hanged for her crimes on the winter solstice in thirty days.”

Everyone cheered, aside from the silent king.

Oh, wow, I thought I was dead right now, don’t scare me like that old man! This is no joke, death here is just that, death. Thirty days to escape then. Tight schedule. But hey, look at me, I’m a princess now, yay for the upgrade!

Again, someone else was acting a bit differently. The crying girl had a really ugly smile on her face, a wicked grin, aimed right at Sofia, or rather ‘Aurelia’. No one except Sofia paid her any attention, they were all much too busy rejoicing at her demise.

Somehow I feel twice as wronged. This is someone’s past? I have so many questions…

The knights unceremoniously dragged her through the palace, they brought her to a luxurious bedroom on the third floor, a group of blue robed people were leaving it when they arrived. “The room has been secured. She won't be able to escape.” One of them said to the knights. The robed group was looking at her like a piece of trash, the one who talked had even sneered at her in passing.

A knight ripped the gag out of Sofia's mouth, and she was thrown in the room. The richly decorated double doors closed behind her, a magic ritual circle flared up, hovering in front of them. There were similar ones on every window.

“Ok. Hey, at least the conditions are better than at the church… So this is ‘my’ room. Damn. Someone loved their art.”

The room in itself was about what you’d expect a royal’s bedroom to be, except with added painting supplies and paintings everywhere. Hung on the walls, stacked on the floor, bursting out of the side rooms. Paintings, paintings, more paintings, all surreal landscapes, and they were quite beautiful too, in Sofia's opinion.

For the first time since she entered the trial, a system message showed up.

Could’ve seen this one coming. Fine, that was already my goal. Survive. But as she thought this, another message popped up.

This a whole different story... I don’t even know where to begin right now. Can I check my status?

Still Aphenoreth? Interesting how [Blessing of the Deep]’s the only thing that survived. Is black-eyed Deep man stronger than the Archangel? Feels like a stretch but then again what do I know… Doesn’t matter right now anyway.

Everything’s locked so I can’t level up I suppose. Not great news. The slew of passive and classless skills are all useless right now except for ‘Silent’ as far as I’m concerned. I’ll take the 70% noise reduction. Archery could be useful too but I’ve never touched a bow in my life… I wonder how that’ll translate in terms of real skill. It does say it improves aim…

Woah, this [Pretend] skill is the saddest shit I’ve ever seen, what kind of life has this girl been living to get a skill like this?

[Pretend] : The mood of people around you is 32% (1*Skill Level) less likely to be affected by your negative emotions.

Having gathered all the information she could off of the status page, Sofia set out to find a way to escape.

There was no way to escape.

This room was a dead end, a well disguised prison cell. Not only the door and windows had been magically sealed, but the walls, floor, and even ceiling were protected in a similar manner too. She couldn’t make a single dent in them, and breaking the seals was clearly out of her capacity.

She had also explored the room and closets but there wasn’t much to be found besides the paint, a large piano and dozens of dresses. Surprisingly, for a princess she didn’t own that much, she didn’t even have a lot of jewelry, the only standout being an oversized sapphire ring carefully tucked away in a lockbox. Finding the key wasn’t all that hard, it was hidden in a pot of paint brushes. Sofia had stumbled upon it before even noticing the box that was sewn on the backside of the largest painting in the room. She pocketed the ring, just in case.

All in all what had surprised Sofia the most was how different she looked now. This girl, in both size and stature was much closer to Alith than she was to Sofia. Honestly, Sofia thought she looked a bit plain for a princess. The dark circles under her eyes didn’t help her looks either, was this princess an insomniac?

I had my doubts before but the more I stay here the harder it is to believe this girl could try to kill anyone… If I get only one thing out of these paintings it’s that she wanted to be anywhere but in this room.

It’s almost too obvious that she was framed. Or am I reading into things too much? The king wasn’t happy about this whole affair either… He’s probably her grandfather. It’s as if he didn’t believe her to be guilty either. So why the death penalty?

That’s way too harsh for a family member, more-so one who didn’t actually kill anyone! Is he a heartless bastard or what? And then why’d he look so depressed?!

Sofia had been rolling on the bed, wondering about the whole situation, for what felt like hours. Someone knocked on the door.

Hey, like the good old times. Am I getting Irina n°2 ? Could sure use some food right now.

Don't want to wait? The full trial arc is already out on Patreon ! (ㆁ△ㆁ)