this fine day's shoutout goes to WolfShine's : The Eternal Winter

A bit of post-apo never hurts, right? I'll even paste a little part of the blurb this time because it's actually got me interested:

"But the worst of the storm is from the glowing blue shards filled with a strange energy that mutates any creature it enters into a mindless monster whose natural instinct is to kill.

How will Alex cope with his newfound changes as the only infected soldier in his base to not fully turn into a monster?Will he die to the other monsters? To the soldiers?Or will he thrive?" 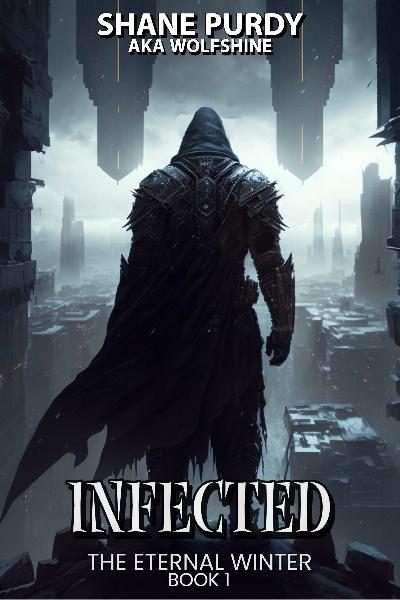 The next thing they all heard was a very real screech coming from above.

The Siren Queen revealed herself as she plunged down onto them. Half fish, half bird, she was a four-winged abomination with a short curved beak on its fish head and a long trailing eel-like tail flailing around. The most disturbing part however was the distorted human-looking face, close-eyed and unmoving, embedded in its torso.

The monster was large enough that it occupied half the main deck. Its landing had shaken the whole vessel. The main mast was broken at the base by the thing’s reckless charge. The monster, who, doing so, had entangled itself in the cording, was struggling to free itself. The ropes were snapping one by one.

Pareth had approached to help Sofia stand up. They were currently standing between the front mast and the Siren Queen occupying the middle of the ship.

“Alith, fly up as a ghost and try to land on its back, attack the wings, Pareth will focus on dodging and keeping it occupied, I’m climbing the front mast.” It was a bare-bones battle plan, Sofia couldn’t think of anything better to deal with the monster. She didn’t wait for an answer as she sprinted to the front mast of the galleon, slaloming around wooden debris, chains and ropes.

As she ran, she heard a loud crash. Blue light shone over the deck.

Followed by sounds of splashing water. Pareth’s health had suddenly dropped by more than half. She summoned a thin ray of healing light on his position without even looking back. Water. At least it’s not fire, but not that reassuring, this is still the ocean.

The sounds of crashing water kept coming from behind, but Pareth didn’t take a hit.

A compressed mass of icy cold water hit Sofia from behind with the power of a cannonball. She felt like an ice giant had slapped her in the back. Then her whole surroundings got drowned in water. The bone armor had cracked open like an egg and was struggling to repair itself.

Fuck! Can’t take another one!

At least the attack had washed her away all the way to her goal. It was hurting all over but she started climbing the mast’s cording.

It started raining. It wasn’t a few drops, in a few seconds, a torrential downpour hammered the whole area, making it hard to even see or hear anything else.

Sofia’s hands and feet slipped many times on the way up, she had even discarded the armor to ease the task, it wouldn’t allow her to survive another hit from the water attack anyway.

[Way of the Fool] was the only reason she could rush towards the top of the mast like a frenzied monkey without a single care for her safety.

The beast shrieked again and again. Every time, she panicked, imagining it was for her, but the dreaded water spell never came. At first it was Pareth’s life total that kept taking hits, miraculously never going down to zero. She had been using [Heal Undead] nonstop during the climb but as she got higher, and the shrieks more frequent, Pareth started taking less hits. It was hard to distinguish anything with the rain but it seemed like Alith was doing a number on the Siren Queen. The only clear sight was the two eyes of the beast’s torsal face producing flashes of deep blue light before every time it used the water attacks.

At first, Sofia only wanted to get high enough to cast [Angel’s bolt] but it seemed foolish knowing how easily the siren could shoot her down in a single attack. She kept climbing higher and higher, only when she reached the crow’s nest did she stop, unable to continue.

That has to be enough… Man, I can never get used to jumping from so high…

Even the knowledge that she would slowly glide down thanks to her ring didn’t make the vertigo and apprehension go away. She had jumped like that hundreds of times in Zangdar yet it was still as bad as the first time. This time was particularly bad with the torrential rain, the wind and the boat’s rolling.

She couldn’t waste any time being afraid, Alith’s health had just taken a large dip. With a last cast of [Heal undead] from a distance, she jumped forward.

The smooth and slow gliding provided by the ring was taking her towards the rampaging Siren Queen.

The rain helped camouflage Sofia somewhat, but she doubted it would hide the incoming lightning.

Her last cast of [Heal undead] had covered a large area, she had kept it up until now even though it was a large drain on her mana. She only needed to have enough for one bolt anyway, if the thing survived it, then it would never let her cast another.

As she silently floated a dozen meters above the monster, she held her right hand up high.

Impressive water balls, birdfish. Now let me show you what a level 99 [Angel’s bolt] can do!

A blue spark of electricity appeared in her grasp.

Ten seconds until it was ready. She reactivated her bone armor.

Drifting further and further away from the monster, she focused her will on the growing lightning spear that shook and pulsated even wilder than usual under the pouring rain.

The massive bird-fish abomination crouched down, spreading its wings. It was going to take off, and it was looking straight at Sofia.

Pin it down! Plant the sword in the talons!

Pareth must have executed the order as the siren shrieked again, in pain or in rage, and it turned back.

Sofia didn’t know exactly what had happened, but Pareth’s Health had gone from a hundred percent to zero.

That was a message she had never seen until now.

Alith had taken advantage of this opportunity to escape from the fight. She was sprinting in Sofia’s direction, she needed to get away from the incoming blast.

The condensed lightning bolt was reaching a decent size. The siren once again started to crouch down.

As it looked like it would take flight… The eyes on the siren’s torsal human shaped face shot open instead. With them came a strong flash of blue light.

It was a feint!

The attack wasn’t a simple water ball like the other times, it was a concentrated ray of water, shooting straight for Sofia, cutting through the air at a terrifying speed.

Sofia’s heart almost missed a beat. She could only do one thing, cut the slow fall ring’s mana supply. The sudden free fall allowed her to drop down faster and barely out of the attack’s path.

She activated the slow fall again. The stop - start made her sick but she held on. If only I could send the attack before I finish charging it up...

The siren queen looked like it wanted to fly off for real this time. Just as it flapped its four webbed wings to lift off, the bolt struck.

A thunderous explosion shook the boat.

Sofia was too close to the blast. The last thing she saw was Alith tackling her as she fell from the air, mana-less. As her armor broke and reformed until it couldn't anymore under the violent damage, her consciousness disappeared in a scorching wave of flames.

And don't worry, skeletons, Pareth will be back... whenever Sofia finds a suitable host... (｀• ω •´)