Today shout-out will be short and simple, again, you're all smart enough to decide what you like for yourselves, I'm just giving exposure to people who deserve it. Here's the cover for Zach Skye's : Knights Apocalyptica 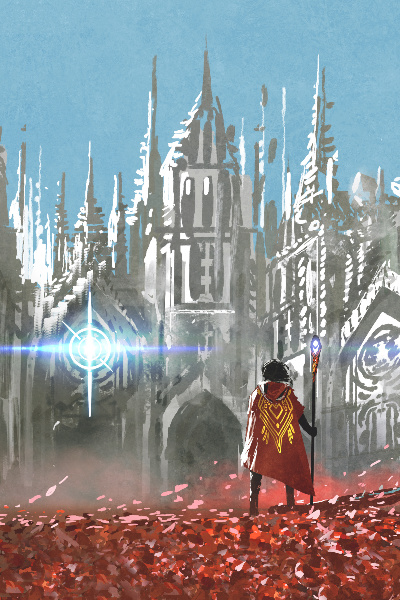 The two girls discussed at length about how to proceed from there. The first consensus was to avoid going indoors as much as possible if you couldn’t see the exit from the entrance. They would always fight outdoors to both avoid being easily surrounded and allow Sofia to use her [Heal Undead] skill. Next, they would carve out a ritual circle on the ground in a reachable 'safe' place to have a way to escape if needed, then proceed to slowly comb out the city.

They would kill as many of these Phageids as they could find, until the entire upper levels were clear. They had checked and the seals on the ways down from the fourth floor of the city weren’t monsters but real crystal blockades. Those things could probably still climb up somehow since some were up there. Or maybe they came from somewhere on the upper levels to begin with, they thought they would find out soon enough.

In fights, Pareth would do most of the job, acting as the frontline and skeletal shredding powerhouse. Alith would be the rearguard, charged with protecting Sofia, who would focus on healing. From what Alith had recounted about the first battle, Pareth didn’t get touched often, blocking or dodging most attacks. Even when outnumbered, his sword of light hit like a raging horse.

The downside was that even in his consecrated grounds, he was quite brittle, and any damage might crack his bones, rendering some body parts unusable. A single solid hit on the spine or a leg could ground him instantly. Which was why the healing was needed.

Of course, Alith was an undead as far as the system was concerned, so she could be healed as well. She was proficient in dodging too but her attacking power was lacking. She couldn't even use [Maiden’s shriek], as she couldn't transform whilst inside the city.

Following these arrangements, they scoured through the monotone ice blue city, checking every weird looking wall and counting the houses’ doors. Even with knowing what they were looking for, the Phageids were hard to find, they hadn’t found a single one in a full hour of searching. That was until Sofia noticed something weird about a house. It was an inconspicuous block of large crystal bricks like all the other houses, but there weren’t any doors or windows. It was hard to find something wrong with it as it was stuck to a large house with many doors, one could easily be mistaken and think that it was a part of the larger house. But it made her uneasy. She had sent Pareth in the larger house to check and there wasn’t a door leading to this place.

They felt glad to have decided to wait a bit further.

“This house is full of them, isn’t it? That’s why we couldn’t find any until now, they clump up in hidden places like this one.” Alith said, “A whole place filled with octopus walls. Just thinking about it gives me the creeps. How many do you think can fit in there?”

“Not unless they somehow all get out at once.” Sofia retorted, thinking about the way to tackle this surprise monster box. “Houses this size typically only have two doors and one window. That’s three Phageids on three different sides…” She looked at the house, then at a spire that took root nearby, and towered up to four floors higher.

“We’re going to make a lot of noise. But I have a plan. First of all, Alith, you’ll be standing on this rooftop.” She pointed at the roof of a nearby house about thirty meters away from the supposed monster nest. “Draw a teleportation circle on there just to be safe.” Then she pointed at the spire. “I’ll be jumping from the spire with the slow fall. Pareth lures the monsters out, whether they follow him or escape it’s all the same, only if they decide to stay in the house do we change plans. If they’re out, I smite them to ashes, I don’t believe they can survive it if two sword hits from Pareth is all it takes to bring them down.”

“That could work, I don’t have anything to add… How does Pareth escape?”

“He’ll run, if some walls are too close to him when I attack, hmm… Well, either he dies too or he’ll have a few stragglers to handle by himself.” Sofia said and nodded to herself.

“If he dies I’m taking us back, not negotiable.”

Sofia looked at Alith with curiosity. “You’re technically already dead, why do you look more scared than me?”

“I don’t know what happens to me if you die and I don’t want to find out!” the short girl angrily whispered, trying her best not to alert the Phageids in the distance. “Besides these monsters are disgusting!”

“You know we’re about to make a whole lot of noise so… Anyway, just catch me after I use the spell, please. Last time I got embedded in a wall from the recoil, that can’t be good for my health. I’ll take off the armor after I throw the thing to make it easier on you.”

“Sure, try not to get launched in a weird direction then.”

Sofia closed her visor and jumped down to the level under them where the spire’s entrance was. She rushed up the spire’s empty floors and its spiraling flights of stairs.

Woah, Pareth looks so small from up here, I can barely see him without the halo and the sword. She looked around to find the rooftop where Alith was carving the ritual circle. She was already almost done, it was her fifth time drawing one today. She might get a ritual related classless skill before I do at this rate.

Sofia waited for Alith’s signal to launch the assault.

Pareth hit a random part of the house’s walls. His sword bounced back, that was real crystal, but that had alerted the monsters nonetheless. The one that had been hiding in the door frame came out rushing at the skeleton, deploying the appendages from its back. It was followed by many others, they all silently gave chase, sliding across the smooth floor. When nothing else was coming out of the house, Sofia ordered Pareth to jump in a small alley.

The space between the two buildings was only wide enough for one monster to go in at a time, they all clumped together to get in. Sofia jumped.

The uniform lighting of the city was immediately changed. There hadn’t been any contrast anywhere until then. The light of the [Angel’s Bolt] was now creating long shadows everywhere.

Sofia’s white armor was being burned black, the heat was even stronger than the previous time. Right, the skill leveled up last time. Holding onto the crackling lightning, her hand burned. She screamed.

Her health was declining. It was hard to even move her arm to release the attack. She didn’t know how but she managed to let it go.

The aim was slightly off.

Alith was looking from a roof under Sofia, she couldn’t look at the light, it was too bright. She wanted to at least watch the thing falling. Before she knew it, she was blown back by a blast of hot air, deafened by the sound of the explosion. She used [AvoiDance] to instantly regain her balance, it was an unconventional way to use the skill she had discovered while washing up in the river.

Sofia was falling in Alith’s general direction, the bone armor receding under her skin. The slow fall ring was still active, which helped, however she was still going quite fast due to the recoil. She couldn’t move mid-air or change her orientation at all.

The ground below was already a scorched sea of flames, a few of the smaller houses didn’t survive the blast, debris flew everywhere on the previously spotless pathways.

She would have missed the roof if Alith didn’t extend her arms to catch her, almost falling off too.

The two girls sat speechless on the roof, watching the world burn around them.

It was Alith who broke the silence. “Hey… do you think my heat immunity would protect me against this?” She didn’t get an answer.

Alith hadn’t seen Sofia’s right side until now, there was only one way to describe it : charred meat.