Sofia decided to take the long route and enter the walled city through a gate a bit further away from the church’s side. The walk was refreshing, for the first time in a while she felt free, her long golden hair swaying in the cool breeze.

All in all, she had gained much during her involuntary stay at the Holy See. If she could just escape their grasp. Being level 67 was already above and beyond all she had ever dreamed to achieve in her life. This was a level most humans would never reach. Even the guards in the Holy See were only level 60!

What she wasn’t happy about was how she had had no choice in all this. If the church had given her a regular paid job, been civil about it, and allowed her to have an actual life she might have even accepted to work for them. Of course this was forgetting the bad reputation they had with how they treated their Saints... And that she couldn’t actually summon any heroes.

She finally reached the gate, this was the ‘farmers’ gate, situated in the very center of the U shaped mountain. Pretty much only the farmers going to and fro used it as the fields were higher and harder to reach than the city. The street beyond the gate was muddied as a result. The security also reflected that quite well, a single guard was sitting near the closed iron bars gate, sleeping.

“Hello?” She called out to the sleeping guard.

Finally the man seemed to wake up, he looked to be right around Sofia’s age, and was quite thin, looking like a scarecrow in his loose uniform.

“Gu- weu- What? Hey, do you know how early it is?” His words were a bit slurred. He held his forehead like it was going to fall.

Is he still sleepy or is he completely wasted?

“Sorry, I fell asleep under a tree and I only woke up now. My parents are gonna be very worried! Can you let me in? Pleaaaase.” She tried her best to act cute but the guard having to look up to her as he was quite small made the whole scene a bit weird.

Either way the guard seemed to believe her. Or he didn’t care at all and wanted to go back to sleep.

“Damn… Don’t do it again, ok? I’m not supposed to open the gate anytime, you know…”

He sighed and disappeared into a side room in the wall. Chains clanked, and the gate was slowly lifted, it only opened up to Sofia’s waist and stopped.

“Go through!” the guard urged her from inside.

She had to crouch under the muddy spiked gate.

A few seconds later the gate started to slowly go back down.

When the guard came out of the gate room, the girl was already gone.

Sofia had observed the city for a long while from her cell. It wasn’t an exaggeration to say that she knew the layout of the city better than most of its inhabitants. The only problem was she didn’t know where anything in particular was. However she was able follow the avenues to different districts, these were easy to tell apart, even from the sky view.

The sun was almost showing itself when she found her first destination in a fancy district full of opulent stone buildings. The city being built on a mountain made it very easy to construct extravagant stone and marble mansions.

The smaller building, for the district it was in, still felt quite rich. The red and black blazons adorning the outside walls left no ambiguity as to what this was.

This was a place that had made a lot of noise when it was founded, so much that even people in a backwater village like Verenha had heard of it.

Vampires had founded an independent nation far in the south. Thirteen years ago, there had been a lot of debate and rumors about this new power and how it couldn’t be allowed to exist. In the end, not a single kingdom or empire did anything against it, and Vasperia became an integral part of the Human continent. The vampires even started to build embassies anywhere that would accept them. They brought valuable magic items for trade. A vampire embassy was as much a political as it was a mercantile tool.

Sofia pushed open the regal massive wooden doors. She used too much force and barely managed to stop them from slamming into the walls.

Ok, wow I had never felt the difference but having a high level is no joke, and that’s with me having a magic focused class. I really couldn’t have done anything to Ovohen if he didn’t fall to his death.

Her arrival hadn’t gone unnoticed. A tall gray haired man looking to be in his late fifties wearing a sleek black suit and a red tie approached her from inside, while curling his mustache. He stood straight with a carefree attitude.

Long pointy ears. That’s a vampire for sure!

“Welcome to the Vasperian embassy, young lady, what brings you here?” His skin was weirdly pale and his tone composed.

“What kind of goods may you be offering?” He sounded and looked wholly uninterested. Saying this, he had already started leading her to a side room.

He turned around and looked at her with narrowed eyes, this single word had managed to grab his attention.

“I see. Follow me," he said as he changed direction.

The whole place was quite cozy, there was a deep red and gold carpet connecting every main hallway, portraits on the walls, vases on pedestals. The glow of a few well placed candles provided the lighting needed to navigate the place.

The destination had changed to a small office on the second floor. The man ushered her in, and closed the door behind her while staying outside.

Sofia sat in the guest seat facing the empty desk and waited. The morning sun peeked through the sides of the heavy curtains, bathing the room in a faint orange light.

A few minutes later, a kid entered the room.

It was a girl that looked ten or twelve at most, she had deep blue hair and long ears capped with gold jewelry. She wore a glamorous deep red dress adorned with thorn-less roses embroideries. She appeared elegant and imposing despite her supposed age.

Is she really that young? Or do vampires work differently? Clearly she has a higher position than the guy waiting at the door, doesn’t she? I bet the amount of gold woven in her dress is enough to make two copies of my headband!

The girl was nonchalant as she took her seat behind the imposing black wood desk.

“I hear from Agran you’re here to sell us blood? You must be awfully confident in your product to dare show up here.” Although her attitude was serious, her childish voice made it hard for Sofia to take her seriously. Yet, she didn’t dare to show any disrespect to the tiny vampire.

“Yes. Well, I’m not that confident about the quality yet, but I have other selling points. May I suggest that you check it for me?”

“Sure thing, I would have done so either way.” The girl waved her hand and a fancy wine glass flew from a shelf straight to the desk in front of Sofia, landing without a sound.

The girl raised an eyebrow when Sofia held her hand above the glass. As she looked back to the glass, it was full of blood. She blinked a few times.

“I understand the situation better now.” She reached for the glass and observed the contents.

Her small hand swirled the blood in the glass, she brought it to her nose, then to her bright red lips. She sipped on the blood, spreading it in her mouth. Visibly done with the process, she then gulped down what was left, licked her lips and put down the glass.

“That’s good stuff. I’d rate it an eight, eight point five maybe. How much can you provide?”

“Look at you getting all confident. What do people teach their young ones nowadays… I’ll buy it for one gold coin a liter. It is worth more but we have to make a profit here.”

“I have a hundred and fifty liters. All the same kind.”

The girl’s eyes widened slightly. Looks like this is more than she expected. Don’t get all surprised, I can summon that much every day!

“Do you want to be paid in silver? You should have enough space to hold the coins.”

Enough space… she really bought that I have a storage item. Better than being seen as an infinite source of blood.

“No, thank you, a gold pouch would be nice.”

“That is fine.” An empty leather pouch appeared on the desk, gold coins endlessly fell from the young vampire’s palm into it. “Can you disclose where you harvested the product?”

“Sorry, business secret. I might come back to sell more on later occasions if the opportunity presents itself.”

“Alright then, the embassy thanks you for your business, Agran will take you to the bottling room, you may store the gold.” She held out a fragile looking hand over the desk.

They shook hands. The vampire’s hand wasn’t cold as Sofia had expected, it felt like any other human.

“How may we address you?”

“I go by Aphenoreth.” Sofia said with a wide smile.

The young looking vampire was very bad at hiding her emotions, going by the shocked look that appeared on her face a second later. Her hand was shaking in Sofia’s grip.

Ok, name’s dangerous it seems, I’d ask why but I can't blow my cover. I just have to keep faking it… It’s my real name now anyway!

“Y- You may call me Astelia, lady A-... It was a pleasure doing business with you.” She was visibly disturbed.

She had forcefully closed her mouth as she began voicing the name, as if just saying it was dangerous. Which would explain why she was panicking so much.

The youthful vampire looked lost in thought as Sofia grabbed the coin pouch and left the room. 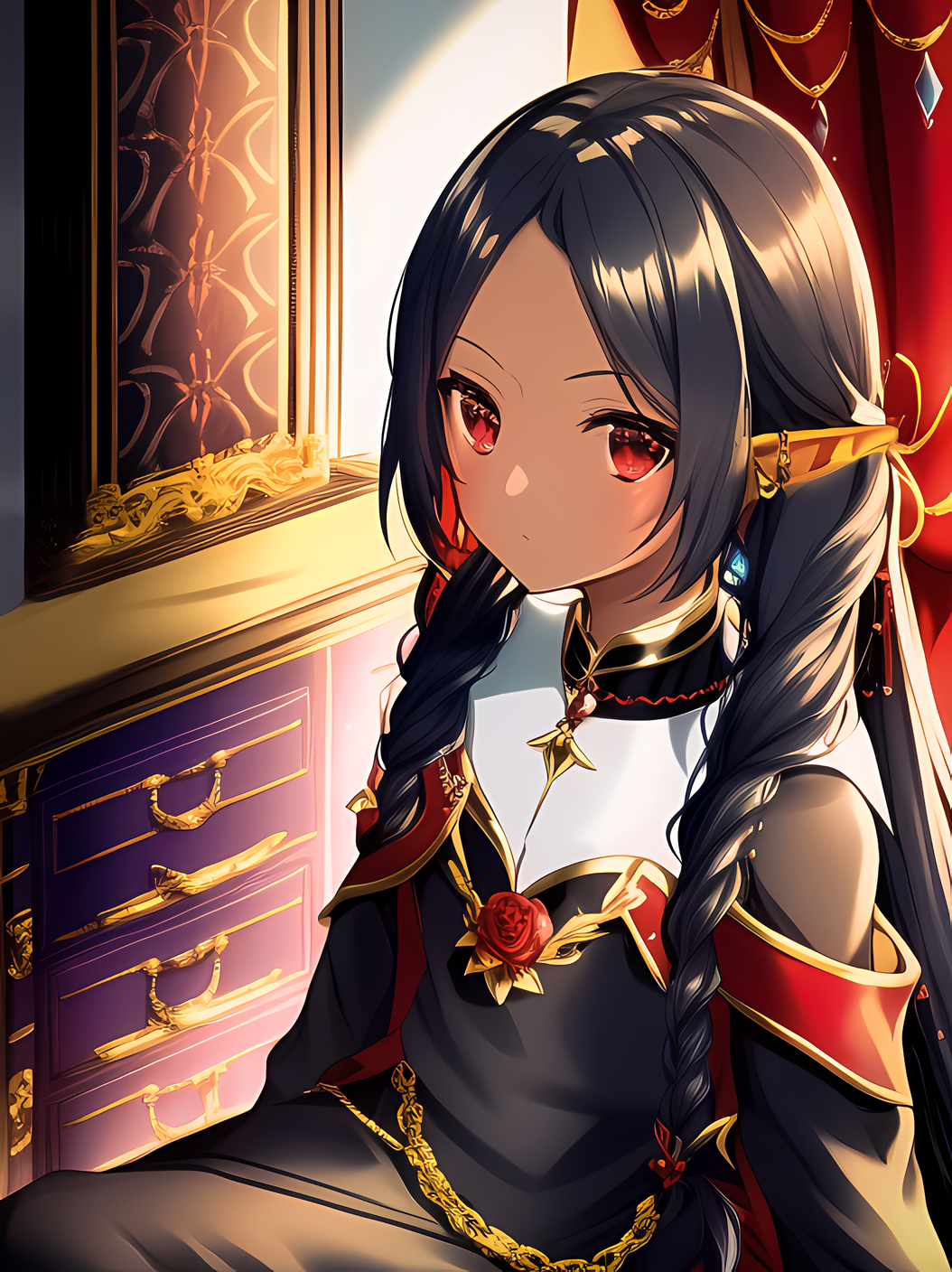 My vampire trader can't be this cute.