Nobody found the rat. As it turned out, the place was even larger than Sofia had thought, it was worthy of being called a fortress. The cloister where she was ended up being quite close to the entrance, it seemed more like an afterthought in the whole design than a place made specially for the Saintesses. There were lower levels but they were devoid of any human presence so likely no jail cells in there, weirdly enough. Maybe that was the only reason she wasn’t in one. These underground levels weren’t fully mapped out, there had to be something dangerous in there as the rat had retreated early, but it wasn’t a human.

The doors on the other side when you crossed the garden led to what was probably the maids and workers' quarters on one side, seeing how everyone slept in communal rooms, and to the paladins’ quarters on the other, where they had individual rooms. She couldn’t tell what was in the other rooms as the rat didn’t report any people in there. But it had told her where guards were posted, and it had found two exits.

One was likely the main entrance, near the banquet hall she had seen before. It was guarded by at least eight people. The other exit was a bit weirder, somewhere far away in the second floor, she had no clue what it could be. The second floor had very few people in it, barely a few duos here and there, probably guards, it was surely more lively during the day. She could already see ways she could reach that second exit at night if she was good with her timings around the patrolling guards, but it was a gamble since she didn’t know what the rat had considered an exit. Maybe she wouldn’t even fit through, maybe it led to a cliffside, even then she still felt she had better odds there than with the front door.

Going to the second floor in the first place was a bit tricky, the stairs from the main entrance hall led directly to the third floor so they weren’t an option, the only ways to the second floor were two sets of stairs, one in the center of the workers’ aisle and one at the end of the paladins’ corridors. There had to be a staircase leading up the oracle's tower somewhere that had access to all floors but the skeleton hadn’t found it, maybe it was behind locked doors. There were quite a few places the rat couldn’t enter.

The next morning, she was drinking her daily bowl of soup without enthusiasm when a tall man in armor entered her room, Magisterium Ovohen.

“Hmm, you’re wearing the saint’s headband, you really reached level twenty then. Good. Follow me.” The man didn’t even wait for an answer, he just turned around and left.

Does wearing this thing mean I’m level twenty? There’s a level restriction or something like that? It’s really a magic item then!

Sofia gulped down the rest of the food while leaving her room. The man marched straight down the same way leading to the kitchen, but entered the long corridor going to the right midway. They passed a few paladins walking around. Everyone stopped to greet the man when they saw him. If her understanding of the layout of this place was correct, they had passed under the main entrance’s stairway to the third floor. At the far end of this corridor was the entrance to the lower levels. They went through the open passage at the end, the door was made of iron bars that could be lowered with a lever system from the corridor’s side. Two paladins were guarding the doorway from the inside, facing the light incline going down. They’re here to keep things from coming out? They wore golden plate armor akin to the magisterium’s but much less ornate. It was a mystery how the rat managed to go in and out the previous night without getting caught by the paladins.

A dungeon right here in the capital! I get why the church built the fort here. They can just train all of their paladins here. The damned… if it ends up being full of undead weak to the holy it’s a walk in the park for a paladin to level up here!

That might also be an opportunity for me… I’m a saintomancer, right? There’s no way I don’t find a way to make use of a place full of undead! Please let my next spells be good!

The duo entered what looked like an abandoned underground prison, the cell bars were rusty and broken, the whole place was littered with stone and metal debris, and thick dust permeated the air. The only light came from the magisterium’s longsword he had unsheathed, it was glowing with a light blue hue.

“Stay behind me.” He tossed a sheathed dagger to Sofia. “Use this to finish off the zombies. Any questions?”

“Wouldn’t I get more experience if I was alone?” She was actually curious as to why he would personally help her to level up. Couldn’t he send just any other paladin?

He started to walk slowly, checking inside every cell.

“Killing just two or three undead here might even be enough to get you to level fifty like that. There’s no way you’d be able to take out even one. Not before you’re level ninety. But you won’t ever get there.”

They kept walking in silence for a while.

“Don’t you feel bad locking people like me in here? Leveling up a Saintess until she’s thrown out for the next one?”

It was something she had wondered about since coming here. The fate of the Saintesses was all on that guy’s shoulders it seemed, but despite the weird treatment she got, and being kidnapped, she was still treated rather well for a prisoner. She had seen the orphanage’s director get violent multiple times and she had feared the same thing would happen to her here.

“It is the will of God, I interpreted his holiness the Oracle's words myself,” the magisterium said in a somber tone.

So he doesn’t really like it but he’s following the will of God? You’re not making the task of getting rid of you any easier, old man!

“... Your God sure is weird if this is how he wants the saints he chooses to end up.”

“Young girl, you cannot perceive God’s great designs! Nor can we. As such we need to diligently follow His guidance, for He will guide us to a greater realm!” He got a bit zealous by the end, but quickly regained his composure.

“Now quiet down and focus on your task, we are merely following God’s plan.”

Sure, thanks for the preaching. Where do I sign up to leave?

They kept advancing through the empty prison pathways, the white robe Sofia was wearing was already a bit gray from all the dust in the air. Sofia was bored out of her mind. She kept sending the rat skeleton useless commands to level up her skill. Spending mana was slow since the skeleton was near. Isn’t it dumb that leveling the skill is easier the further you are from the summon? My skills really don’t make any sense.

She still kept half her mana available just in case something went wrong. The zombies finally showed themselves a good hour of walking later. It didn’t take Ovohen long to take care of the twelve strong group of zombies roaming the corridor. Holy fuck they STINK! I’m happy I don’t even have the [Raise Undead] skill, I’m never making a single skill with zombies. Skeletons are great, they don’t smell like ass and they don’t make dumb noises. Regular necromancers use these all the time? No wonder they have a bad reputation, I also wouldn’t associate with someone that reeks like that!

She went on an internal rant about undead hygiene while the magisterium seemingly danced with his sword through the group of undead, leaving behind a bunch of limbless zombies lying on the ground, unable to move.

Even with the things in that state, she had a hard time coming close to finish them off. In the end, she still did, making sure to hold her breath for as long as she could. The dagger glittered with holy light when she took it out. Another magic item! She plunged it in the first zombie’s head. It didn’t die. She had to stab it eight times before a system message popped up.

She expected a level up message. It never came. Wow, the shared experience isn’t so good… I was worried I would reach 50 faster than I could find a way to get out but it seems that won’t be the case.

The further they went, the larger the hordes of zombies became, but the magisterium wasn’t even touched once. They were in there for ten hours straight before he had to carry her back when she fainted from exhaustion.

This wasn’t all for nothing, however. 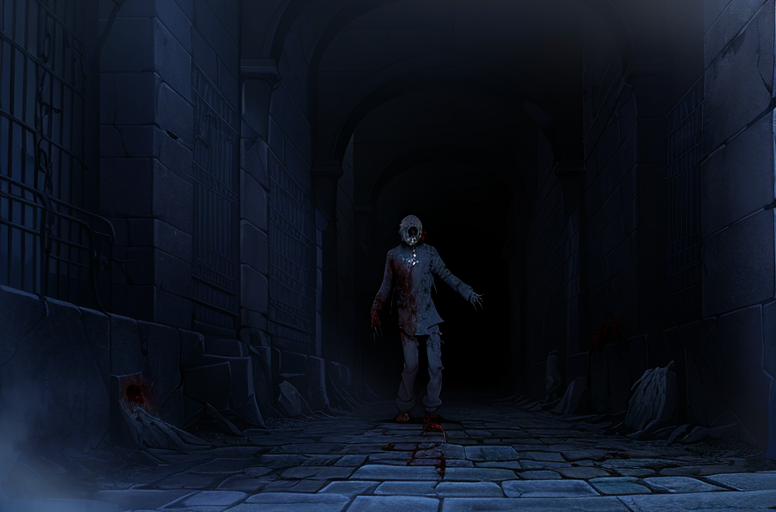 I had never met such a vile creature, even from afar, the wet gargling sounds that it produced echoing through the vast tunnels made my stomach churn.