Sofia didn’t have time to process the surprise she felt from reading the weird [Saintomancer] title of her class. She focused on the unfamiliar place in which she had woken up. The church already got me? But how! When? Where am I? The prayer house in Verenha isn’t even large enough to have a room like this!

She was on a plain but large bed, larger even than what the director had at the orphanage. The bed sat dead in the center of a very wide, and otherwise empty room. The indirect sunlight in the room came from large windows that covered a whole wall. The walls themselves, much like everything else beside the bed, were made of completely unadorned polished white marble like she had only ever seen used for the noble’s gravestones. The whole place felt very cold.

The only other presence in the room was the robed priest that had spoken previously. He was a short and frail looking old man, but he carried himself like he was some high ranking noble. Maybe he is. She had the urge to jump at him, maul his face, and run out of the room. But she had seen the armored guards walk out of the room, surely they couldn’t be far. Also, she was chained to the bed by her right ankle.

I just wanted to summon skeletons!

“Uhm, sir priest… I have a few questions.”

“You may speak your mind, Saintess.” The old man didn’t bother turning to look at her, visibly absorbed by whatever he was looking at through the windows.

“This is your new room in our Holy See, Saintess.”

The capital is a nine day carriage ride away from the orphanage in Verenha! What do you mean we’re in Einsen! Why not the Red Winds Empire while we’re at it!

“How did I get here, exactly?”

“You were summoned here by the Magisterium, Saintess.” Sofia had a very hard time keeping her face from contorting. So they can just summon me here any time they want? Good. Great. Fantastic! God, I want a refund on my life, please.

“Can anyone just do that?!”

“Only the Magisterium, Saintess.”

Only one person I need to murder in cold blood to get out of here then? Such a bargain, thank you… They don’t even see me as a danger… The chain was clearly more of an intimidation tool than a real restraint, it wasn't even tightened properly around her ankle.

Loud steps echoed in the corridor outside the room. A gigantic mountain of a man in golden plate armor entered the room. He had to crouch to get under the door frame. Standing upright in the room, his graying hair almost touched the marble ceiling. He kneeled toward the old man. I get it, I probably couldn’t even kill the man in his sleep.

“Rise. You may brief the Saintess on her duties.” The high priest unceremoniously left the room after giving his order.

Ovohen closed the heavy wooden door behind the priest. “Your job now is to follow my orders. No more, no less.” He edged closer to the bed. “If you do, you will get more amenities in your room, if not, you will lose them.” Oh so I can get transferred to a better jail if I'm a good prisoner, I see, very enticing…

“You should already have the [Summon Hero] skill, dump all your mana into it to train it everyday. It needs to be level ten by the time you can actually finish the cast. It costs six thousand mana to fully activate so don’t worry about summoning anything with the one thousand you have.” He’s already going for the door. “Which is why starting tomorrow we’re going to quickly get you up to level fifty. That will take around three months. That’s it for now. Perform your duties well, God’s grace shan’t be wasted.”

I don’t have the [Summon Hero] skill though?

“What is this [Summon blood] all about anyw-” Shit, what if they’re listening?

“Uh, I worry for nothing, they didn’t even chain me up properly.”

Damn my skills are weird. It’s like both classes were just mashed together randomly. Sofia focused on a skill in particular, that’s how you could access the description.

I don’t know what I expected.

She went through the whole list one by one.

[Holy Skeleton] : Lights the way with a Holy loyal Skeleton.

[Heal Undead] : Gather Holy Light to heal 10 (10*Skill level) Health a tenacious undead that will fight for you.

[Blessing of ] : The saintess is blessed by

The more she read the less she understood. The explanations made no sense. The last one isn’t even a full sentence! She checked her previous skills.

These ones at least didn’t change. I have way more mana than the man thought, were the class multipliers applied together? Necromancers get halved health, halved stamina and quintupled mana… That means Saintess gives halved health, halved stamina and a hundred times the mana? What a cheat. Well, that means nothing with useless skills. She looked back at her mana pool with awe. Five thousand. Wasn’t that what she was supposed to have at level fifty? How much would she have by then? If anything was a good surprise from the messed up classes it was this.

Some quick math… he said I should have a thousand now and have six thousands by level fifty. So I would gain a hundred per level. But it was quintupled and now I have five thousand… Then I should get five hundred mana a level. That’s thirty thousand at level fifty one! [Summon skeleton] costs 50 mana if the grimoire wasn’t wrong… If I had it I could have a hundred skeletons right now! But instead…

There’s a summon already... The skeleton in the crypt back in Verenah I guess. She couldn’t lie to herself, Holy Skeleton did sound quite good. It couldn’t possibly be worse than a basic skeleton, she hoped. What worried her most was the four summons limitation. Can I never have more than four undead? What kind of shitty necromancer is this! Wait, no, it says Lv.1, that shouldn’t be here. Necromancer summons can’t level the book said. Their level would be hidden and decided at the summoning. Maybe it’s not so bad if they can level up.

What would happen if they died however? Would they be back to level 1? There’s no way that it’s better than having a hundred basic skeletons…

“I can feel a faint link with it…”

She couldn’t see through the skeleton’s eyes or anything fancy like that. But she instinctively knew the skeleton’s location compared to her, it seemed the [Holy Skeleton] skill could at least send simple orders as she felt the skeleton moving after ordering it to leave the crypt.

The simple order cost her eight hundred mana points. Wow, that's expensive. Maybe because he’s so far away. She thought it was a bit of a waste but she spent eight hundred more mana to order it to go back to the crypt. No testing could be done if the skeleton got spotted and killed during the day. People usually weren’t very kind to the undead.

So fast! My classless skills all took weeks to level up. Does just dumping mana in there do the trick? She contemplated spending all of her mana on useless commands right now to level it up more. I should still try the other ones first.

[Summon Blood] did exactly what the skill said. It summoned some blood mid air that fell off and formed a small puddle near the bed. She could see some practical uses for that, especially with how much mana she had, she could probably fill a whole barrel with the stuff. But it was hard to imagine just that helping her escape. What would higher levels do, summon more?

[Heal Undead] did exactly nothing. This one should be a priority once I get out but before that… In the end [Holy Skeleton] was probably the best choice to level up, wouldn’t it make the skeleton stronger?

It looked like her mana regeneration was a little less than one point per second. This is quite fast as well… Necromancers should be at about two points per minute at level one. My mana pool is so big though… Still, that’s more than three thousand points an hour, I can just use it all and it will be back way before the testing tonight.

She sent more commands to the holy skeleton, namely ‘Hide in a corner’ ‘Don’t move’ ‘Be silent’ ‘Escape if someone finds you’. She expected to feel tired from the big mana spending but felt nothing. Maybe the book authors just made up this whole mana exhaustion thing, she thought.

It's level three now. The description didn’t change, I just hope it isn’t useless to level it up or I might as well train with [Summon Blood] instead.

Sofia struggled a bit to wiggle her foot out of the shackle. She was free to leave the bed now. There really wasn’t much to see in the empty room. The windows showed a perfect view of the mountain flank capital down under. The city of Einsen was built on a steep U shaped mountain flank, making it very safe from invaders. The Holy See was a fort a bit higher on the mountain than everything else, named after the very same ‘Holy See’ of the church, composed of the oracle and high priests who led the religion. The only building that sat higher up on the mountain was the royal palace on the opposite side.

If only she had wings, she could just fly away. Only to be summoned back here… But she didn’t have wings anyway. The only thing she could get out of this window was a precipitous drop. Would they just let me kill myself like that? She didn’t find any way to open the windows. They didn’t even vibrate when she punched them, let alone break. All she did was hurt her hand.

She went up to the door. It wasn’t locked. Can I just explore the place?

Someone opened the door from the other side before she could do it herself. 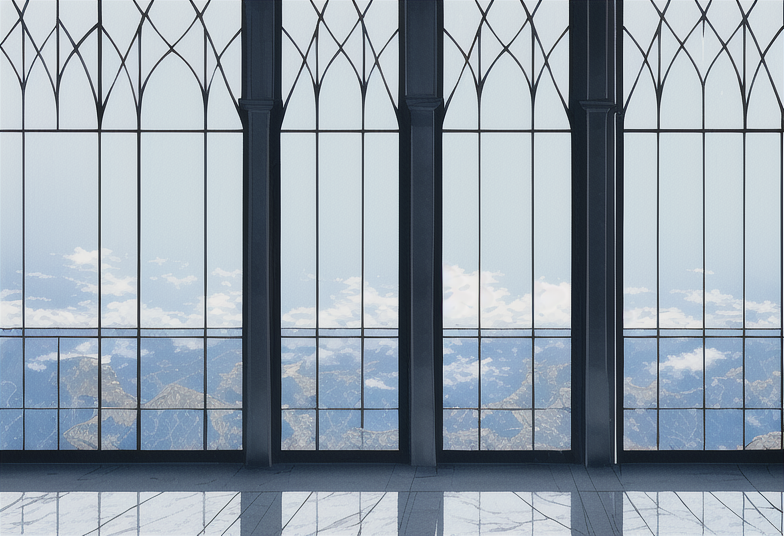 The room felt cold and hostile, but admittedly, the view wasn't all that bad.

I'm happy you decided to stick around, especially returnees from my previous fiction attempt, I hope you'll love what I have in store this time. Don't hesitate to follow or leave a nice comment. (They're always nice)

I'll be back to a slower pace after that, probably 5 chapters a week.