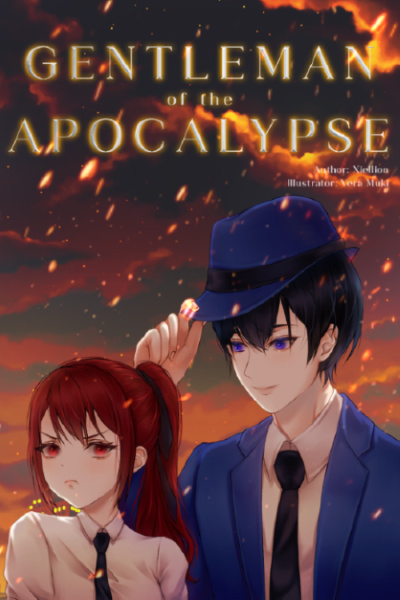 Gentleman of the Apocalypse

We fought our way through the zombies as we followed the source of the sound.

A blonde woman with glasses screamed at us on top of a small building.

The zombies had already surrounded her as she stood at the very edge of the roof.

Perci dashed past me and rushed towards the building.

The zombies were just arms length away from Agnes, causing her to slip and fall from the building.

Perci knocked over the zombies in the surrounding area and caught her just in time.

I didn't understand why, but I was a little irritated when she did that.

Perci gently dropped her to the ground and led her by the hand.

I pouted as I looked at them moving towards me as I swung my bat angrily against the zombies.

"They're just holding hands. It's no big deal, what are you thinking?" I muttered to myself.

Agnes looked at me in the eyes for a moment, but she quickly looked away awkwardly.

My former best friend…I recalled what happened back at the school. She, along with Damien and Bryce had kicked me and Perci out of the gym.

She still held a grudge over what I did. It was because of one certain boy.

I ignored her and looked at Perci.

"T-there's a place where all the survivors have gathered!" Agnes said. "It's somewhere by the beach near the amusement park!"

She was looking at Perci when she answered my question.

"If that's where all the survivors are, then what are you doing here?" Perci said.

"Um, I was looking for someone!"

The sound of bikes could be heard coming towards us.

Ryder's gang killed off the zombies and began to circle around us.

Sounds of laughter could be heard from the bikers as they trapped us with nowhere to go.

"HAHAHAHAHAHA!" Ryder laughed at us.

The gangsters got out of their bikes and held their weapons. As usual, Dustin was hiding behind them.

"We meet again, Perci!" Ryder said. "I bet you thought you wouldn't see me again!"

"Can't we just stop fighting? We don't have to do this. There's a safe place for survivors. We can go there together," Perci said.

"That's boring! Why would I do that, when I can just ride around with my boys?! And we can do whatever we want!"

The gangsters cheered alongside Ryder.

"We're the kings of this city now!" Ryder said with a wicked smile.

"How naive, do you really think you can rule over this city?" I said. "You couldn't even beat Perci when there were 5 of you!"

"That wasn't luck! You completely destroyed them!" I argued.

"Oh, it's different now," Ryder said. "Now there's 10 of us! I have to give credit to my other gang members for saving me!"

"Let me introduce you to my 3 strongest men. First off, we have….The Bulldog!"

A big black guy with tattoos showed up and crossed his muscular arms.

"He has monstrous strength that can pulverize his enemies! A raging force that cannot be stopped!"

A thin lanky guy with long arms and a long tongue showed up with killer eyes. He also had a braided hairstyle.

"He has incredible reach and whip-like reflexes! No one will be able to escape his grasp, he'll wrap around your whole body and choke your lights out!"

This is too scary!

"Last but not least, we have….The Hawk!"

A guy with a red mohawk showed up placing his fists together and cracking his neck.

"He has a really cool mohawk!"

That's all you have to say about him?!

"Hahahahaha! What are you going to do now?!" Ryder said. "There's no way you can beat all of us!"

Me and Agnes were shaking in our boots, but Perci stood his ground with a fierce look on his face.

"I'll do what I've always done. I will fight to protect." Perci said and held his umbrella.

"I'll give you a choice. You can abandon these two girls and run away. It's not a bad deal don't you think?" Ryder said.

"Tsk, fine then. It's time for you to get destroyed! Get them!"

Ryder ordered his men to charge at Perci.

How are we going to get through this?! They're much stronger than they were before!

A voice screamed out from the rooftop.

It was from a black ponytail haired boy wearing glasses underneath his silver eyes.

I didn't think this could get any worse….

"You scum! Are you planning to hurt Ori?" Kenji yelled.

"Who are you supposed to be?!" Ryder said.

"Y-you don't know him! T-that's Kenji! He's a student in our school currently training to be a MMA fighter!"

"MMA? Are you serious? I've never heard of him!"

"T-Trust me! That guy is dangerous! They even call him the Dragon Fist! Not to mention, he's head over heels for-"

"I won't let you lay a finger on Ori!" Kenji said. "Unless you all want to die, I suggest you leave her alone."

"Ha? Die? You really think you can take down all of us?" Ryder said. "You think you can play hero? Pfft. Dream on, idiot! We'll beat your ass and strip you in front of everyone, how about that?"

The gangsters laughed at him mockingly.

"No thanks. How about I strip you of your life instead?"

Kenji looked down with an impending gaze and pulled on some black leather gloves with what looked like steel guards on his hands.

Wait. I remember now. Those are his sap gloves…..

"Quit deluding yourself! You're no match for the kings-"

Before Ryder could finish his statement, Kenji jumped down and dropkicked the guy with the mohawk.

The Hawk fell down to the ground.

The Bulldog rushes towards Kenji and tries to grapple him, prompting Kenji to step back. Two powerful punches follow after, but Kenji is able to weave his head around to dodge both attacks. Then, the Bulldog launches a heavy hook punch to the right.

"No matter how strong you are, you won't be able to withstand this."

Kenji evades to his left and counters with a punch to the liver.

The Bulldog falls to the ground in pain. Kenji stomps on face to finish him off.

"No way! Even the Bulldog?" Ryder said, while stepping back. "G-go Snake!"

The Snake licks his fist and approaches Kenji. He launches a quick barrage of tentacle-like punches towards him. Kenji is unable to dodge and is forced to block all of them with a defensive position.

The Snake had longer arms, so Kenji is at a disadvantage with his smaller reach.

Kenji catches The Snake's arm and lifts him overhead.

Kenji flips him around and slams him to the ground.

"All of you! Fight him all at once! Use your weapons this time!" Ryder said.

The remaining gangsters held their weapons to fight.

"So that's how you're going to play, huh?" Kenji said.

They all tried to attack Kenji with bats, crowbars and knives, but he was able to disarm all of them with his fists and knock them out.

Are those gloves of his really that tough?

"You're all terrible fighters."

Now, it was only Dustin and Ryder left.

"H-hey! You deal with him instead!" Ryder pushed Dustin towards him and ran to his motorcycle.

"Move aside, weakling," Kenji said and kicked him away lightly.

"You won't get away with this!" Ryder hopped on his motor and tried to ride away.

"You forgot about me."

Perci knocked him off the motorcycle with a big blow to the head and he fell down.

"Phew. I guess that's over. Thanks," Perci said.

He ran over to Kenji and showed his hand.

"You're Kenji, right? I'm Perci. Thanks for saving us," he smiled.

Kenji ignored him and walked forward to me instead.

Perci shook his own hand instead.

"K-Kenji…." Agnes tried to approach him shyly, but she wasn't noticed.

"Ori! I missed you!" Kenji hugged me tightly around my waist.

"Don't touch me so casually!" I pushed him away.

"Ah," Perci hammered his fist on his palm as if something clicked in his head.

"That guy….is he your new boyfriend?" Kenji asked me.

"Oh," Kenji placed his head on his forehead. "If that's the case, that means you're single right now. So, why don't we just go back together?"

"Why? Is it because you like him?" Kenji pointed at Perci.

Eh? Why can't I answer the question?

I looked down quietly and blushed.

"She just needs space from men right now," Perci held his shoulder. "As her ex, you understand, right?"

"Oh, that's true. She must be still getting over that bastard Lucio, so I guess she wouldn't be comfortable being in a relationship right now," Kenji said. "Damn him."

"Can we not talk about that guy, please? I don't want to hear that name ever again," I said.

The burning memory of that blonde boy still haunted my mind.

"We should go," Perci said. "Do any of you know how to drive a motorcycle?"

"No," Kenji shook his head.

"I hate to say this, but we need that guy," I pointed towards the hiding boy.

"We don't have a choice. I guess we'll have to give him a second chance," I said.

Perci walks over to Dustin, who was cowering behind the motorcycle in fear.

“Don’t worry. I’m unwilling to hurt those who don’t want to fight. It’s the gentleman’s code of courtesy.”

Doesn't this seem like deja vu? I could have sworn this same sequence happened before….

"What do you want from me?!" Dustin said.

"We need another motorcycle driver, so I would like to ask for your help," Perci said.

"There's a safe zone for survivors, we'll be heading over there."

"How do I know you won't betray me like I betrayed you?"

"You don't. But it's better than being left out here to die, right?" Perci smiled.

I walked up to Dustin and slapped him in the face.

"I won't forget about what you did! You don't have a choice here! So just do it!" I said.

Perci and Dustin hopped on their motorcycles.

"Um…so who's going to be seated with who?" Dustin said.

"K-Kenji…let's sit together…" Agnes muttered as she sat on Dustin's motor.

"Ha? Hell no! Go sit with Dustin and Agnes instead," I said.

"All right! Anything you say, my queen! I will respect your decisions."

I sat behind Perci on the motorcycle.

"I didn't expect him to be so obedient…" Perci said.

"That's just the way he is. It's almost like he's a submissive dog who thinks I'm his master," I said.

"Is that why you broke up with him?" Perci asked.

One reason was because of Agnes…and the other…..Kenji has certain issues.

Kenji glared at Perci as we rode off.

Honestly, it worries me a lot.