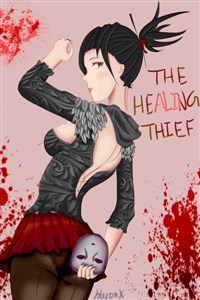 Many past choices ended up with what we have present. Some were important, some were trivial. And some were... just tragic.

Who knows, maybe we do have some sort of past lives and we’re  just harvesting the karma we sowed.

A sick lady with hazy eyes leaned her body to the man she loved. Sitting by his side, awaiting death.

She then eyed her arms and legs which already turned into wood. A sad curse.

No one knew why she had a sad smile on her. Or as to what she told her knight.

As only the Queen and the knight were there in that lonely wooden cabin. In the middle of an icy storm.

A young girl with red hair, hiding behind a wooden door. Overhearing her sister's voice.

Jealousy was what she felt most.

A gray haired boy sitting down on the cold cobbled ground. Having his hands soaked in blood as he stares onto the corpses.

He failed them by being too greedy.

Exchanges of sword clashes could be heard, before a badly beaten boy fell to the ground.

He was then told to get up or bare the daily consequences.

A lady with golden eyes sat down as she wailed. She felt the sting of betrayal once more even though she was sure that it wouldn’t happen... at least from him.

“So what? Those were people that would die either way! Why are you now ignoring me!”

A long journey to perfection.

Turning an amateur novel into something... great.

Follow the journey of countless characters with their intertwining predestined pathways.

this is a nice wuxia romance story featuring two tsundere, a Don Juan and an ice queen as main characters.

i especially love the first couple's banter : it's fun and cute to read. for me, it's the selling point of this story.

please keep up the good work !

Hello, this is part of a review swap, okay to start it off I read several chapters in and noticed a few prevalent things throughout.

The grammar was overall good not too many mistakes, but there are irregular font and size changes that threw me off, I don't know if it was intended or not but it seemed to be not. Keep in mind author, and future readers, that this isn't my kind of story but if you interested in this type of genre it may be for you.

Now on to the thing I noticed.

"Even though he hates, and I mean really hate making tea, that's something he couldn’t help but be forced to swallow.

He's the type that would mix poison with aphrodisiac in drinks to cause grievance to the one he hates but he couldn't obviously due to how it's quite likely he'll be accused to be the one. " Here show us that he hated making tea, maybe a grimace or something, also explaining characters vs showing us what his character is may be better because this just came off as flat and didn't feel as genuine.

Overall keep working on it!