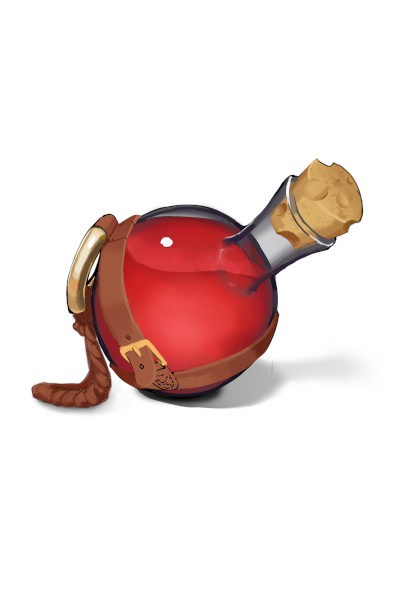 Falsely accused of murder, Jack escapes with another inmate, a mysterious figure known as Winter. As a couple of outlaws with nothing to lose, the duo set out to to brew and sell illicit mana potions.

It needs some filling out. There are a lot of interesting bits of the story that I just wish were more cohesive. Frankly, it reads a bit like someones D&D campain, a good one, but there are so many side quests, convenent encounters, and random events that it starts feeling forced.

There are long term goals that the main character is working towards, but you almost forget about those with how much other stuff keeps getting in the way.

The other main issue is the characters. They all have a backstory, but they're shallow things. The core cast don't talk about their history, motivations or goals. It leaves their bonds brittle things, but more importantly, uninteresting.

The first chapter is the best and I think the story worth giving a read. I hope the author slows down the plot to devlop the characters and their interactions more, as well as making the overaching story more focused.

Good with a few flaws.

A good story, with a few flaws. The biggest flaw to me is the characters actions arent consistent. Nor are they all the way likeable.

The story reads like a video game. They literally go from 1 quest to another without anything in between.

Still enjoyable for me. Its not boring thats for sure. I wish it had a little more slice of life to it.

Well, I am unsure about this story because on on side the story is really great and novel. But on the other side there seems to be holes in the story. The changes from one point to another are to fast and not enough explained. I think the author could fill this holes with some world building and explanation of thinks which happens.

One example is this fishing village and frog guys I did not really understand what happened.  Thinks like why did they leave their airship their, why did they kill this thugs, could they not do this in a smarter way. Why did they go to this ruin? Why did the thugs kill all the frogs? Why was it this easy to go back to the village and kill everyone there. Some of this questions are rudimentary answered but I think the story could very well be expanded here.

I think the author could enhance the story by a great margin in this way, because in the moment there are to much short cut from one scene to another.

But all in all this story has potential but to get really great it needs some editing like my review probably.

I hope this is a fair review, because a lot of stories are overrated on royal road.

there is no world building the author just throws out terms and expect the reader to go along with it.

i love crafting novels but you cannot expect me to just lap up whatever you write.

There's a lot of interesting ideas floating around in this story.  The characters all feel pretty well flushed out.  If I find some of the characters frustrating, I find that they still seem like they're acting how their personality dictates.

There's a lot of grey in this story, and I like that we can legitimately consider most characters the bad guy or good guy depending on how charitable we're feeling.

The action is present and good, the power progression is handled well in my opinion.  It's hard to find a lot in this story that's not to like.  If you wanted to be critical you could accuse the main character of being a little bit chosen one / overpowered but I personally rather like what I've seen so far and I like my main characters to have the potential for great strength.

I just read all posted chapters today. I think this is an excellent story so far and I am excited to see where this goes. The characters are funny and engaging in their interactions with each other. The worldbuilding has depth and the seeds of larger mysteries have already been planted. The grammar is excellent. The Main Character has good abilities without being overpowered and you can see areas where the abilities can grow to be something great. I can just imagine him as a Victor Von Doom type with armor, magic, a mask, and ALCHEMY ( in place of SCIENCE). The only thing I don't like personally is that in some chapters the story can jerk from scene to scene without adequate transitions on screen. Then again this could be a deliberate choice to emphasize the disorientation experienced by the MC at this time in the story. Overall I loved it and you should give it a read if you have the time. I need 37 more words so that I can submit this advanced review. I spent all of my academic career trying to be as exact and concise as possible and now it trips me up. I loved using alchemy to buff other crafting abilities in Skyrim and I would love to see the main character develop some skills in blacksmithing to go along with his innate ability to manipulate iron. Magneto Main character would also be cool.

If you're a fan of revenge fantasy or power MCs then this is a unique take on the genre with a cast of memorable characters. The tropes are all there, though some new ones are thrown in, and the sky pirates genre is sadly lacking on RR. I'm amazed I haven't reached 200 words yet

Of course, if you're NOT a fan of the "slowly turns darker as revenge and power consume him" trope than Jake might not be for you, but if that was the case you're missing out on a fun popcorn genre. This story does have a nonhuman protagonist in a way that you won't quite expect.

A good story. Well defined characters, good world building and a decent amount of suspense about who (and what) the MC is. The grammar is clean. The party dynamic is good with all four of the main characters having clearly defined personalities and roles. I like stories about alchemists and most of the time they quickly become stories about sword fighters or mages but so far this story is staying true to its roots.

In my opinion it is a very promising novel. I think that it at least deserves a higher rating than most other novels on this godforsaken site. The only criticism I really have is that it needs some filling out, most of the time it falls short and leaves a lot up to interpretation.

Pretty sure I will be seing this one on Risin star

I stumbled on this accidentally when I saw the amount of updates the author posted on the main page. He was at 38 at the time.

Clicked to see what it's about and read 4 chapters even though it was time for bed...

Maybe it doesn't deserve all 5 stars but it's above from most of I read on this website.

It's a first person narrative which I usually don't like but the narrative has enough comedy and descriptins that it flows like a river.

The grammar has very minor issues of missing a character or two and maybe some dialogue things which I could not even decide if they were on purpose or not like starting with Capital letter after "?", maybe I would chose a different word somewhere but that's it. Not enough to dock it...

The main character is entertaining enough by himself and by now the two others are growing i  importance by foreshadowing of one and the other is pretty much passively tagging along. The opposing party has been mentioned but not overly.

The story flows for the first 5 chapters without too much detail but enough to keep you guessing and building up the MCs world.

As an author on Rising stars at the moment I am pretty sure this story will surpass mine if it gets the audience it deserves.