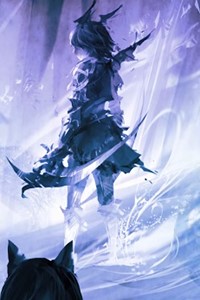 In a realm of fantasy, filled with great wonders but also dangers…

Its inhabitants are tied in a cruel wheel of destiny, as darkness and corruption prowled the realm since its very beginning; to corrupt and deform them to the point of no return.

The Gods and Goddesses’ mortal creations: Humans, High Elves, Amanis, Barakas, Castanics, Elins, and Poporis were blinded by their own nature and desires for centuries.

Thus, their short-sighted ideals and racial barriers led to long, constant wars between themselves, destroying all possibilities for peace within the realm.

And when they finally realized their tremendous mistakes, they can no longer undo their mistakes, no matter how much they tried, as they slowly fell into the crude gears of destiny.

Except, when all hope had been extinguished and all possible solutions were swept away by the hands of darkness…

...An unknown black-haired magician bestowed another chance to this realm overwhelmed by the darkness, by turning back the hands of time.

After time rewinded, opportunities revealed themselves now within arm's reach… The next step needed to save the realm was someone to take ahold of those opportunities.

But…none remembered even a sliver of the bleak future, mildly drawing near to them like a spider closing in a helpless prey.

Will they be able to change the bleak future? Or will history repeat itself again, as if destiny itself is taking charge?

Based on the MMORPG The Exiled Realm of Arborea, Valley of Titans Server (TERA).

Credits to Vocaloid, LechnerPR and I4MD347H for editing. Thanks a lot!

Recently, I have joined the 'Pledge' movement, which means: "a concerted effort by the WriTE community to encourage authors to finish their stories, and to discourage authors from leaving their fans hanging."

Being this said, I have pledged my Fac-Fiction Novel to the Pledge to communicate to all my readers that I will not abandon my novel till it is done!

-If I fail, I will perish in the hands of Velik and Pandora will come for me and consume my soul.-

Up, down. Left, right. This unpolished gem will take you places!

Overall 3.75/5: Okay so first I have to commend the author for going against the norm and choosing to do a story with a non-chronological and multiple POV narrative style. I feel that this aspect of the story sets it apart from most of the boring old, linear first or third person stories that proliferate this site. Another thing that must be noted is that the author has said that English is not their native tongue and that they are trying to improve their grammar (partially through this work) so I will be lenient with regards to grammar. However, just so potential readers know, although the grammar is bad and it impacts the style (which I'll get to in a bit) I believe it is more than readable enough and that it comes in far above the median grammar of the stories on rrl. Note: This is an 'encouraging review' and is intentionally lenient. I extend similar treatment to other aspiring authors whilst being harsher/more critical of more established writers.

Style: Impacted heavily by the grammar but I won't count that here. What does count is the wonky formatting, so I hope you'll go back and clear up some of the bad code lying around. There were also several 'wall of text' paragraphs that I believe could be broken up to improve reader experience. The narrative voice itself was interesting as the author adopted a third person omniscient narrator which helped bring forth the characters' emotions and personalities whilst allowing for frequent movement of perspective. However, the flow of the story is a little off, presumably because each chapter is self contained (A problem I suffered in my initial chapters as well.) Essentially what this means is that successive chapters do not begin where the other left off. This isn't a problem most of the time, but you need to be careful to establish a flow that your reader can follow. The 'background/flashback followed by present time' structure you've adapted in each chapter does create a good flow, but you might want to avoid switching to another perspective within the same chapter. What I mean is, you show the background of the character who is the emphasis of this chapter and then you bring us to the present, this is fine, but when you go to another character after that and then to another, it becomes a little jarring. You can always put those new perspectives in another chapter or you can make them a regular feature like the rest of your style so you're chapters go like: "flashback-present-goddesses" or something. Then again, your story is just establishing itself right now so perhaps the flow will become easier to understand later.

Story 4.5/5 A wide variety of races, a slowly unraveling mystery, rich lore, deep characters with interesting backstories and interactions, and an established world. I do not know how much of this comes from the existing work (since this is a fanfiction) but I assume the author has developed most of the characteristics of the various races themselves. However, note that the rating for story is based on the potential that this story has, rather than on the story in its current state.

Grammar: 3.5/5 Readable and you obviously run it through a spell check so that's good. I also saw a glimpse of a wide vocabulary so if you can brush up your tenses, eradicate some unnecessary articles and remove run-ons and get a good PR, that'd be great. Also, I've mentioned this in a comment but I'll do it again, fix your dialogue tags please! Using "-" is not cool! Use commas or periods based on the situation. Another thing, don't use multiple exclamation marks and asterisks. Your punctuation is good enough otherwise, please don't ruin it :P

Character: 3.75/5 Okay so I found the characters distinct and interesting but I didn't get to connect with most of them enough. Perhaps this will be remedied in the future but it's important for a reader to build a relationship of sorts with the characters to create an empathy link, so to speak. Without this, it becomes hard to really feel for a character when something bad happens or to enjoy their happiness.

Conclusion: An interesting, unpolished gem that deserves to be worked on for a bit. The author is not very proficient in English but is making a very active effort to improve so I expect this story and the author's ability to write, to improve significantly with time. Also, the non-chronological storytelling along with the rich world and the myriad of characters all lead to a very interesting story with a lot of future potential. Definitely worth keeping an eye on! Read, followed, recommended and WC approved! ^_^

Note: The author has found a PR/Editor so the story's grammar and style should improve significantly in the near future. I recommend waiting for the PR'd chapters to go up before reading the story and/or leaving a review.

Not sure, harder to read than most

This story is hard to understand,  i just dont know what exactly is wrong with it.

The Grammar is readable enough, so not really a problem.

There is just something about the writing that makes it hard for me to enjoy this story.

Atleast theres a clear improvement from the earlier chapters to the recent ones.

Trying to read this novel was an herculean task, i did sadly fail around chapter 3.

With time the autor will get better,rewriting old chapters,maybe i will give it another try then.

A Story that needs major polishing

I will say this much.

The grammar is a bit undesirable as hell. It is not only needlessly wordy, it also deters the readers from reading the story at first glance.

However upon reading the story further, I admit was a bit drawn to the concept and the plot. It shows the author is putting a lot of work into it, though it can be improved.

That is all I have to say.