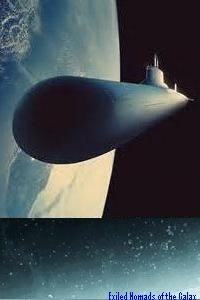 Supporting the Titan Class StarCruisers is 1,250 BattleCruisers, 1,200 Destroyers, 2,000 Frigates and 5,000 Corvettes from Earth Nations. Tens of thousands of GunShips and Drones were deployed to join the largest fleet in the history of the Earth System. There was a fare amount of confidence amongst the citizens witnessing the scale of the deployment and most were confident that even the 2 great powers threatening to bring their age old war to the earth system would be forced to reconsider.

The whales surprisingly found refuge within the water worlds of the Breegun Empire due to apparently having good affinity with the amphibious Breegun. The Breegun went as far as to help to evacuate as many whales from UEN territories as possible. The Breegun Empire clearly knew what was about to happen and didn’t hold out hope that the Vars and the Aaum would leave Earth unharmed. In fact the prevailing opinion across the Galaxy was that the UEN was doomed.

Humanity would make a stand for the survival

When the opposing fleets of the Vars and the Aaum finally showed up numbering around 400 Ships per side the UEN held out hope for survival. The Vars and the Aaum had not brought anything smaller than a BattleCruiser, but what they lacked in numbers they made up for in Ship size. The capital ships on both sides were a little over 40km in length and 4km in width. This was indicative of the power of civilizations who possessed advanced exotic energy sources.

As the Vars and the Aaum fleets seemed to ignore the UEN ships and immediately attack each other it became clear why there were no smaller ships. The first weapon used was a 1,000,000 Megaton Antimatter Nuclear Warhead. In the aftermath of the Nuclear detonation the UEN immediately understood what would happen because all of their sensor systems were flooded by the radiation coming from the Nuclear Explosions. The UEN ships and defence platforms had been blinded.

From what the Sims could deduce the 1,000 GigaTon warheads weren’t primary weapons but something used to blind each others sensor arrays to the real weapons which are Plasma Beams. The Vars and the Aaum ships seemed equipped to shrug off the 10 TeraTon Warheads being thrown about. It was all too apparent that any Gunship or fighter caught up in the explosions would be instantly vaporized. Thus the UEN commanders began the process of recalling all Drones, GunShips and Fighters.

The UEN commanders hadn’t sensed what changed the tide but they noticed that the Vars had fired a volley of missiles at Earth and the moon. The Vars had apparently come-of less that equal against the Aaum so they made good on their threat to attack Earth. The UEN ships tried to take out the incoming missiles but they were apparently also heavily shielded, and the screening TeraTon warheads exploded before the UEN could fire their own 250 Megaton Nuclear warheads to stop the missiles. With sensory arrays flooded the second, third, forth and fifth volley of missiles slipped through relatively unobstructed.

The first impacts came from the Moon revealing the yield had increased to 100 TeraTons. When the volley of missiles reached Earth’s atmospheres they detonated simultaneously revealing an astounding combined yield of 45,000 TeraTons of TNT. The explosions vented the atmosphere into space making it easier for the second volley to vaporize most of the surface water and vent it into space. The remaining missile volleys destroyed everything that had survived.

With Earth now dead the Vars and the Aaum abandoned their fight and jumped back to Hyperspace.

Earth was dead and there was now no hope that it would ever live again; the beautiful blue world had been murdered.

Navi joined the chorus of Human wailing as he saw the destruction of his birthplace; the Homeworld of all Humanity. It seemed as though Humans everywhere stood still as they saw the murder of billions of their kindred.

Against such overwhelming power there would be no opportunity for vengeance, no dream of retribution. Humanity firmly understood that they weren’t the favoured creations of the God of the universe. Humanity understood that their self-righteous arrogance had lead them to this point, and now without the UEN to hold them together it was possible for humanity to be scattered to the winds. They had taken Earth for granted, but now it was gone, and with it the one thing that held them together.

All earthlings were now Exiles.

Barely a week had passed and a freighter spotted a Zaarz Hive Ship near UEN space. Humans went into a panic and it was everyone for themselves as it was apparent that any day now the harvest would begin. The Zaarz aren’t interested in political and military posturing; they’re not interested in Vassal Civilizations. The Zaarz harvest biological materials for their hives and farm what remains; they are the monsters of the Galaxy. The carnivorous bastards were now aiming for Humans.

The Zaarz first kill everyone that fights them, then they kill, package and consume all the adults of a conquered civilization, and finally they take the children back to their homelands to be breading stock or the new type of food and a new Zaarz variant. There’s a cruel precision in the Zaarz methodology; a calculated horror in the efficiency of their method. The Zaarz are a plague equally hated by all the other sentient species of the Milky Way galaxy, but they won’t cooperate to oppose the Zaarz for their own political reasons.

Thus the appearance of the Zaarz created a major crisis for the Civilizations bordering UEN space. The fear was that the Zaarz would gain a foothold in this region of space and they would all be at war with the Zaarz sooner than they would prefer. Therefore their options were limited; they could attack the Zaarz together or aid the humans in defending against the upcoming Zaarz invasion; doing nothing was not even almost an option because a Zaarz Foothold would be a disaster for all of them.

As despicable as their actions had been it proved effective as the Zaarz promptly abandoned their invasion of the sector; likely choosing some other unfortunate species close to the Zaarz homelands. The fear of the Zaarz was so strong that the Civilizations that had a long association with humans didn’t hesitate striking down the defenceless humans. They attacked deliberately and without mercy; dropping GigaTon warheads on the unsuspecting human colonies.

Back on Agrissa the plan to go to systems close to Human affiliated aliens was in jeopardy as many were concerned about even the Greys and the Blues. Navi was amongst those who believed that their only hope was to go to Terra; an Earth like world at the very edge of the galaxy. The Terra Colony was established by the survivors of the ill fated Explorer Class StarCruiser ENS Terran Star E214 that collided with an asteroid when coming out of Hyperspace.

The ENS Terran Star E214 had suffered a crippling blow that damaged both its HyperDrive and its Class 6 Sim. The propulsion system was barely functional and the ship would need to be landed if the crew was to survive. They landed the ship on the smallest of Terra’s 7 moons and used the Drones and GunShips to ferry the 15,000 survivors of the 20,000 crew to Terra. Since the ENS Terran Star E214 was an 11 year jump from Earth they had a long wait for rescue.

By the time a rescue mission was organized 2 years later the ENS Terran Star E214 crew had established a small settlement and indicated that Terra was an ideal site for a colony. Therefore instead of sending an Explorer Class StarCruiser the UEN sent an SCC Class StarCruiser fully loaded with 150,000 people and everything necessary to set up a colony; including 4 jump Gates for the Terra System and 2 nearby systems. Multiple Class 7 & 8 Sims were sent over with the components to construct 500,000 bots since supply missions would be rare if at all.

Current estimates put the population on Terra at several hundred million making it ideal, and the fact that it’s so far away means that it’s out of the reach of the hostile aliens.

Nevertheless Navi couldn’t trust the Blues and the Greys; he had lost all trust for aliens. So there was no way he was heading into a region that is controlled by aliens. Navi had unwittingly turned into one of the leaders of those advocating for a path to Terra.

The Jump Gate had been built and people would make their own decisions.