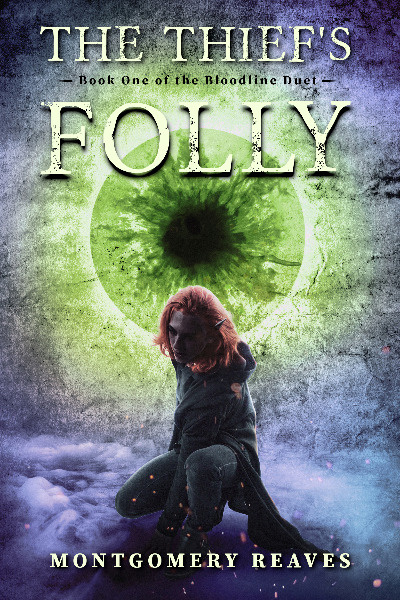 The Thief's Folly (Book One of the Bloodline Duet)

“Do you ever?” Urtis quipped. Rorri chuckled halfheartedly with him, suddenly confronted by how often he used that excuse. Not that it was untrue. He had more than enough to agonize over in lieu of sleep, with the past week being exceptionally agonizing.

“I heard the Lady’s got a special surprise planned for you,” Urtis said with a knowing smile and wink. “Should wake you right up!”

Rorri’s jaw dropped, mortified. He had no idea that such banter was acceptable on the Plateau. Or was this some sort of test…?

“I-I have no intention of p-participating!” he stammered.

“It is unusual,” Urtis said, stroking his chin. “But you needn’t be so down on yourself, ser. The Lady is grown. She can certainly choose her own company!” He lowered his voice to a conspiratorial whisper, leaning in close. “No matter what the Madam says!”

“H-ha!” Rorri tittered, trembling, then cleared his throat, unable to look at anything but the ground. “How – er – w-why do you know all this, anyway?”

“Word travels quick, ser,” Urtis chuckled. “You’ve been the hot topic in the servants’ quarters of late. It’s not every day the Lady takes a liking to someone, and from the forest, no less!”

“Okay, that’s – this is g-getting weird,” Rorri said with a grimace. “I like you, Urtis, you’re a lovely person, b-but you’re making me very uncomfortable right n-now, so let’s please – please stop.”

Before Rorri could process anything further, the doors to the manor swung open, and from within emerged Lady Shacia, with Markus tailing closely behind. She walked with perfect, practiced posture, dressed a bit more fancifully than usual. She carried a small blue purse tucked under her elbow, and a wide, white parasol, twirling a little with every step.

“You may return to your post, Markus,” she said as she crossed the gate. The uptight guard silently obeyed, watching the forest elf for as long as he was in sight. Rorri respectfully bowed his head, fixing his gaze on his tutor’s flat pink shoes.

“Rorri,” she greeted with a nod.

“Why do you look as if you’ve been trampled?” she said with an uncomfortable laugh. Rorri glanced at her, but quickly corrected himself, forcing a smile through his knot of nerves.

“It’s b-been sort of a rough week,” he answered. “I feel a bit like I’ve been t-trampled…”

“Oh, I’m so sorry to hear that…” Shacia’s shadow shifted. “Did something happen?”

Rorri’s eyes glazed over, his mind fleeing to a far-away place…

He tensed and shook his head. “Sorry – no, nothing happened – not really, I mean – I-I mean, yes, sort of, but… I’m really tired, and I’d rather not t-talk about that, if that’s alright.”

“Of course it’s alright,” Shacia said, though her voice betrayed a strange combination of concern, disappointment, and curiosity. “Well… I suppose you could have a nap on the way.”

She glanced to the side of the road, where a gaudier-than-normal carriage waited, two white horses with braided yellow manes bridled to its front. Daaron, the Rosari’s chauffeur, sat attentively behind the reins, awaiting the Lady’s command.

“You’ll see,” Shacia said mischievously, fluttering Rorri’s heart. He twisted the strap on his bag, frantically searching his mind for the right thing to say.

“Oh, don’t be absurd,” Shacia interrupted, waving her hand. “For god’s sake, it’s not as if we’re eloping.”

“R-right, of course!” Rorri squeaked. “But shouldn’t I be w-worried – shouldn’t you be worried, you know, about… c-consequences?”

“I can’t imagine what consequences you might be referring to,” she said slowly.

“Just let me do something nice for you,” Shacia pleaded. “You deserve it, for what progress you’ve made in your studies.”

Rorri shifted his bag around to his front, ears burning. He’d arrived at the manor with every intention of rejecting the noblewoman’s advances. With the coded language she’d used to invite him, he assumed there was an element of secrecy at play. He certainly never anticipated she would be this… open.

“A-alright,” he conceded, too bewildered to keep protesting.

Though the inside of the carriage did not match its pearl-encrusted exterior, it was still elegant – and comfortable. Rorri had never realized how the bare wooden seats of an ordinary cab had mistreated his rear until he experienced those stuffed velvet cushions. They hugged his body like a steady lover, tasseled edges kissing his skin. He almost regretted sitting there at all – normal carriages were certainly ruined forever – but it was too late. He sank into the seat, enraptured, his eyelids fluttering like feathers to the ground.

Though he meant to stay awake, sleep still came to steal him away, and he didn’t put up a fight. His tutor’s voice echoed unintelligibly in the distance. He’d already departed from her realm, crossing into a hazy, twilit dream…

Bio: I am but a simple cat-owl.