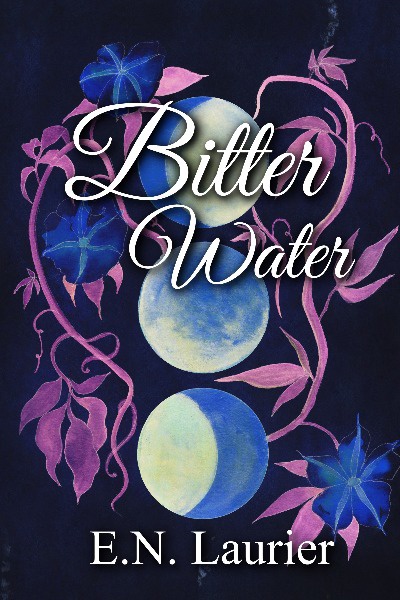 The men’s room was nice, a simple room with a toilet and sink in matching blue crystal. But he did not have the wherewithal to lock the door behind him, let alone take in the aesthetic.

Breath in. Hold it. Breath out.

He clenched his jaw as he leaned against the sink. In the mirror, his reflection was a mess. A grimace was stretched over his face, teeth looking too sharp and long to be quite right.

Fletcher closed his glowing eyes, burying his head in his hands. His heart hammered against his ribs. The smells of the restaurant beyond flickered in and out, like closing and shutting blinds over a window. But he still managed to make out a familiar floral perfume getting closer.

“Mr....F-Fletcher?” Hazel’s voice was unmistakable through the door, soft and hesitant.

“Just a moment,” Fletcher grunted. Dammit not now. Why now? Years without an incident were almost down the drain all because he could not control the hammering in his chest. This was dangerous. Hazel was dangerous.

With shaking hands, turned on the tap and splashed water onto his burning face. Then when he was satisfied his eyes had gone back to their hazel color and his teeth were once again as human as possible, Fletcher exited the bathroom.

He bowed to Hazel, a smile strained over his face. “I apologize, Miss Hazel. I-” He swallowed the bitter taste in his mouth, like blood and coffee. It had come close. The rippling still ghosted down his spine, like an animal pacing a cage. He shuddered. “Are you ready to go back to the room?”

Hazel took a step forward. “Wait. First. Are you alright? Give me your hand.”

“No,” he exclaimed, fists clenched tightly at his sides. Then he relaxed.

Fletcher did as he was told, holding out his bare hand for Hazel to take. His eyes slipped shut. This is where it would end, he imagined. His affliction and crystal magic never ended up well. But the feeling of their hand on his was like gulping water after a long hike.

Hazel took his hand in both of theirs and gently brought them to their chest.

“Please...Mr. Fletcher,” they whispered. “Take a deep breath. I-I need you to do that for me. Please. I don’t know what to do.”

Fletcher opened his eyes once again and took in a deep breath. Slowly, he leaned down, his free hand coming up to cradle their face. “I’m sorry, Miss Hazel. You deserve better.”

They were truly so beautiful. Though their features were soft, they had an angular nose and sharp brows. The contrast was so striking that looking this close almost took Fletcher’s breath away.

The urge to press his lips to their’s was strong, tugging at his chest. He could kiss away the worry and desperation in their face, leaving them half-lidded and dazed.

Then, like a brush of snow on a winter coat, Fletcher kissed Hazel’s forehead.

“Would you-,” His voice was barely over a whisper as his lips lingered against their skin. “Would you like to go back to our room?”

I'm sorry it is so short. I'm splitting traditionally paced chapters to match what Royalroad likes.

You can call me “E”. I write solo and with my spouse. I’m still learning how this website works so we’ll see if I can figure it out.