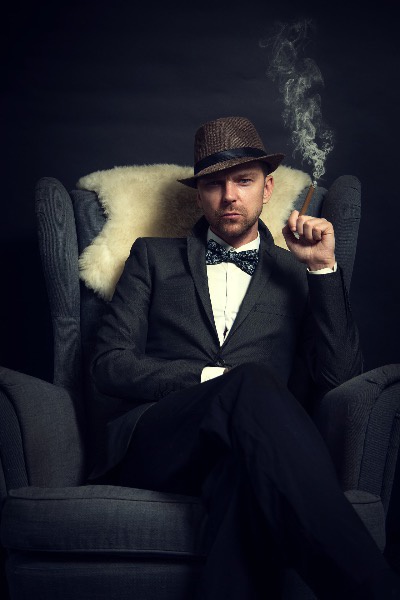 It was later, and I was back at Raz's place. The evening crowd was in full swing. A half-orc woman sat daintily on the bar, crooning softly, while a grumpy little goblin tickled the keys on a piano. I didn't recognize the song. It sounded like a lounge-lizard version of some old river shanty.

I had a corner booth to myself, where I was chewing over the facts of the case with another warm beer. So far, not much was adding up.

According to the Twin Magi, the attempted hit went off around midnight. They were both in the tower's main lab at the time, putting the final touches on another squad of clay golems for the Emperor's Own. Aside from the Magi themselves, the only other person in the room was a human officer, one of those guys in the glowing magical armor.

Apparently, the last part of the animation ritual involves attuning it to the glyphs and symbols forged into the armor, which then acts as a sort of remote control.

Based on what they told me, it's also one of the most dangerous moments for an officer. The armor renders them all but invincible to physical attack, and removes any need to eat, sleep, or rest. The ritual is one of a handful of times an officer actually removes his armor, becoming as vulnerable as anyone else.

According to them, the assassin was a man wearing a cloak, and carrying a glowing hammer. Every strike sent cracks of lightning in all directions. They had no idea how he got in, and were barely able to shield themselves when the lab went up in flames. In the ensuing chaos, the officer died, and all five of the new golems were destroyed.

The assassin did manage to escape alive. The physical description was vague, but didn't rule out the possibility that it was Wyatt Collins.

The only question left—according to their story—was who wanted the Twin Magi dead badly enough to summon the kid into this world, put a magic hammer in his hand, and send him on a potential suicide run.

That was where I was running into a snag.

Don't get me wrong. The Twin Magi provided me with plenty of names. Almost too many. It was going to take me days or weeks to run them all down, and I suspected that was the point.

They were hiding something, and they wanted me chasing my own tail rather than digging around the Etherial Tower.

No, the real question—the one they were trying to keep me from asking—was what the Twin Magi really knew about Wyatt Collins' disappearance.

I was about to order another warm beer when I spotted a familiar face in the crowd. It took me a second at first, because he was staring away from me, at the half-orc crooner. I couldn't blame him. Like Raz, she could pass for human in the dimly lit bar.

Once I realized who it was, I palmed one of my daggers agains the inside of my forearm, got up from my seat, and casually wound my way through the crowd. I got to the street vendor's kid before he ever saw me, and pressed the tip of my blade into the small of his back.

"Thought I told you to get lost, kid."

The kid froze in place. He raised both hands, showing me he wasn't holding anything.

"Here's what's gonna happen," I said. "I'm gonna walk you to the door. You're going to step outside. And then I'm never going to see you again. Understood?"

"I'm not here for trouble," the boy said.

"Sorry. Not in the business of believing punk kids who tried to mug me a couple of days ago."

"You did me a big favor. You helped me. I have something for you. Make us even."

The boy nodded in Raz's general direction. "Mr. Raz says you were asking about the trouble up in the wizard's tower. Yes?"

Like I said before. Raz was all business. You got no special treatment if he liked you. Which meant that even the details of a confidential conversation could be for sale, if the price was right.

I wondered how cheap this one had gone for, if a poor street kid could afford it.

"The wizards, they have a very young wife."

"You ever wonder where she goes when the wizards have no use for her?"

That was a good question. I asked the kid what he knew about it.

The kid gave a knowing smile. "I hear she likes to walk under the hanging moss by the River Promenade. But she doesn't like to walk alone."

A cryptic clue, leading to a dark river walk at night? Oh-so-conveniently delivered by the same kid who'd been eye-humping my bag of valuables last time I saw him?

Right. I wasn't born yesterday. I poked a little harder with the knife. "You setting me up, kid?"

The kid winced. "Believe what you want, mister. You did me a favor. I came here to do one for you. Now it's done, and we're even. Yes?

That seemed to satisfy him. "Good. Now, no one can say Cytio owes an outlander anything." He spat on the floor before leaving.

I grabbed another beer, went back to my corner, and thought about what Cytio the street vendor's kid told me.

It wasn't much of a tip. Hell, it was probably a trap. But I wasn't any closer to finding Wyatt Collins than before. All I knew for sure was that the Twin Magi knew more than they were saying.

Maybe the best way to find out what was to ask their wife.

The River Promenade was around a mile upstream from Raz's place, a ritzy district of boutique shops, cafes, and high-class merchants. Weaving in and out of them was a wide cobblestone walkway, lined with marble statues and high, decorative stone arches. The tops of the arches contained long box-beds, in which the Imperial gardeners had carefully cultivated the Promenade's famous hanging moss.

The effect was beautiful by day. By night it was breathtaking, with thousands of fireflies waking and taking flight. It was like something out of a dream or a fairy tale, which was why it was such a popular spot for lovers.

Lyse, the young wife of the Twin Magi, was quietly strolling along, window shopping.

Or rather, that's what she wanted me to believe.

In fact, she'd been waiting for someone, but had figured out she was being watched. Now she was just stalling for time.

I had to admit, she was good. I shadowed her for a good half hour before it occurred to me I'd been made. She must have given her Romeo some kind of signal in that time, one that said they weren't alone.

By the time I realized the game was up, I knew her mystery man was long gone.

Still, there was no point in wasting the evening. Not when I had a potential witness to grill.

I stopped at a flower stall, bought a long-stem red rose, and headed over for a chat with Mrs. Magi.

She eyed the rose with the same sultry look I'd enjoyed in the Etherial Tower. "For me, Mr. Cross? You shouldn't have."

"Call it an apology," I said. "I seem to have ruined a perfectly romantic evening."

She took the flower, held it to her delicate nose, breathed in. "The night's still too young to tell, Mr. Cross. And I could use an escort around the Promenade. It is so dangerous here after dark."

"So who were you waiting for?"

She gave a faux-demure smile. "A lady never tells."

"Especially not a married one."

"Don't misunderstand my... arrangement... with my husbands, Mr. Cross. Yes, we're married. But my duties are to play hostess, appear at functions, and manage their household. Nothing more."

"So neither of them minds if you go out for a little romance?"

She ran a long, delicate finger up the inside of my arm. "As long as it is kept discrete, who I see is my business."

"Funny you should mention that. Business."

Lyse sighed. "You're going to bore me. Aren't you?"

She stopped, smelled the rose again. "What do you want from me, Mr. Cross?"

"I want you to tell me the truth about what happened the night someone tried to kill your husbands."

She eyed me up and down. "They say you can go crossworlds. Is that true?"

"I've always wanted to see another world. I hear wonderful things about towers of glass, and steel birds that can carry hundreds of people through the air. If I tell you what I know, would you take me?"

I didn't want to make promises. But the clock was ticking, here. If I didn't find Wyatt Collins soon, whoever had him might just throw him into the meat grinder again. And there was no guarantee he'd make it out this time.

Lyse looked around, casually, as if admiring the fireflies. She was doing a three-sixty scan, looking for eavesdroppers. "There was a dead man in the tower that night," she said. "One of the Emperor's Own officers."

"I heard. Supposedly, the assassin got him."

"If so, he was a very thorough assassin."

"The man was already dead, Mr. Cross. Three of the golems carried him and his armor into the shop in a shipping crate. Before the fire."

I asked a few more questions, but that was all Lyse knew. She wasn't even supposed to know that much, but she'd managed to sneak a look into the crate when the Twin Magi were otherwise occupied.

By the time she was done with her story, we'd finished our circuit of the promenade. She let go of my arm, and I made to kiss her hand. Lyse had other ideas. She locked her lips onto mine, and held them there while the world seemed to stop.

When she moved a half step away, I didn't want her to. "You promised to take me with you when you leave. Don't forget."

I wouldn't. The kiss made sure of that.