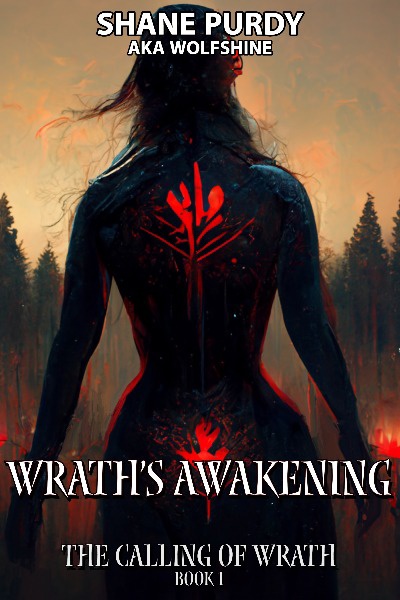 The Calling of Wrath: A Medieval LitRPG Apocalypse

What happens when a medieval world of swords and steel is invaded and forcefully introduced to a System of levels and magic?

It was just another ball.
Princess Cassandra thought she could deal with it.
She just had to pretend for half an hour to actually care about the attending nobles before her father would let her leave, as usual.

That is, until the sky started glowing blue and strange text appeared in front of her face, mentioning something about a System.

Even that she could deal with.
After all, it’s interesting, right?
Regardless of how… bizarre… it is, it’s still something new in her rather boring life.

But being kidnapped by planar invaders from some planet called Earth after a literal glowing heart flies through a portal in front of her and disappears in her chest?

A couple of notes:

There will not be any sexual content or romance in this story at all.

This story is a medieval LitRPG Apocalypse. It begins when a System initializes in a medieval world that doesn't already have magic. The System is automatically translated to everyone in the story in a way that they will understand if they are unable to read or are blind.

Additionally, Cassandra is not your typical type of princess. She is much more laidback, without much care for politics, and she is by no means spoiled. In Midgard, everyone in the three royal families must train in combat so that they can protect their share of World Tree Sap, which grants whoever drinks it various benefits, from the monthly challengers.

PS: Yes, I know not every princess is spoiled. It's just that there are a lot of instances of there being spoiled princesses, so I thought I'd mention that.

The content warnings are mostly so that I have freedom to do that in the future chapters. I normally don't put all that much swearing into my stories, or traumatizing content.

Although there does tend to be some gore from time to time in my writing.

This is my fourth series, and I hope you like it!

Also, I am open to suggestions! Feel free to leave suggestions on how to improve the story, and if I feel that they're good ones, I'll add them!

I have two major criticisms of this story that prospective readers may be interested in.

First, there is very little "medieval" here. The System has stock-standard modern terminology which either doesn't (or more commonly, it shouldn't, but does) make any sense to the locals for a lack of context (okay, there is a little meta-humor where the story pokes fun at itself when it comes to high-school level algebra). The princess protagonist hardly seems like a medieval princess and more like a modern teenager. The medieval world is

being invaded by Earthlings with a system and advanced tech, and she gets kidnapped by them and gets outfitted in their nanotech underarmor. She gets a crash-course in the System from an Earthling. And given that she's quickly stranded in the wilderness for the indefinite future,

whether the local civilization is medieval or not is large irrelevant, especially when what little tech she has she'll have to craft from raw materials in the wilderness or it's a cheat item from a friendly Earthling.

Second, the story has an incredible number of coincidences within the first ten chapters in order to move the plot forward and, more particularly, get the protagonist on the road to the story.

First, a magical OP mcguffin (the Heart of Wrath) chooses her as its host.

Second, she is immediately kidnapped by Earthlings with teleportation so she can be brainwashed and turned into their Wrath henchwoman.

Third, one of the Earthlings betrays the others and helps her escape.

Fourth, the particular escape he engages her in is teleportation to the center of the dark forest which is magically/monster-y cut off from the rest of the world.

Finally, a different, friendly earthling happens upon her, understands with very little information what crazy circumstances are happening to her, and decides to help her with a crash course and a handful of advanced tech cheat items.

Now, I think at this point she's ready for a training montage / move forward with the plot, but jeez was that a convoluted way to get her to a "nursery area". And to summarize one point above, that means that on three different instances, she's

man-handled by foreign men while unconscious or semi-conscious (once for kidnapping and twice for saving her).

There are other issues with the story, though I'm doubtful they'd be of much user to readers because if the above seems fine to you, then you'd probably not have an issue with the other problems I have with the story.

A system invades a medieval world, causing chaos. Execution of the premise is done very well. There's some Norse themes at play here, and the World Tree in the middle of this realm is apparently very important, to both the residents of this world and the invaders. I highly enjoy stories with overpowered main characters, and this certainly seems to be one of them. There's plenty of interesting abilities, and levels are already going up. In short, if you enjoyed the author's other works, you're likely to enjoy this one.

Style: The author implemented some of my stylistic suggestions from my earlier review; after a brief re-read, I think my concerns were addressed. Some of the dialogue still comes off as stiff, but it's far less noticeable now. Overall, great improvement, and I'll raise my score here accordingly.

Story: In terms of plot, this story has moved along at a strong pace. The introductory arc of the narrative has ended already, and the main character has finally found her footing. Superb work here.

Grammar: Technicals are good, I only noticed two errors in the first seven chapters. LitRPG formatting is done in a unique way; I'm not sure if I like it more than normal tables. Either way, it's organized well and understandable.

Character: In terms of characters introduced besides the protagonist, it's an odd bunch. For ostensible invaders, some of them certainly seem to have reason to help Cassandra. There's a substantial amount of mysterious figures who are only mentioned, and even the ones introduced are peculiar. A complex web of motivations are hinted at but not explained, leaving me very intrigued. Great stuff!

I believe that the story had a strong start and is filled with enough mysteries to make it very interesting after the first arc is over. I am a fa of the natural way that Cass is introduced into the system. I am looking forward to reading this as it progresses!

The MC acts too stilted

The premise is good, but the execution needs work. I don't want to be too harsh, because it has potential, but the way the main character acts just pulls me out of the story.

No matter how chill or laidback someone is in regular life, I just can't believe they'd be completely unphased by a strange "system" appearing in front of them (especially since she's from a medieval society and has no concept of video games), then being kidnapped, having their body forcefully changed, teleported all over the place and being put in various life or death situations. It feels like she has no emotions at all.

My other criticism is how her internal voice sounds like a modern teenager - she says "math," for example, or "anyways" and there's nothing medieval about that. That again pulls me out of immersion.

I think this story would work better if it was set in a modern world invaded by a system, and if the main character showed a bit more emotion. It's not all bad, though, and I'd recommend reading this if you really like the system and leveling parts of the story, and don't care that much about characters. From how far I've gotten, the system seems well-crafted and she seems to be progressing at a good pace.

Caveat: At only 86 pages (B1 ch16), this review is very tentative. I normally would not post a review this early, but the author requested reviews, so ...

If you like The Rise of the Winter Wolf, you'll probably like this story too. You'll recognize the author's style (first-person, present tense) and the main character (the same sort of introversion, introspection, and personality as Wolf in RoWW). If it weren't for the facts that the MC is female and expresses no specific fondness for coldness, I'd think that the MC is a reincarnation of Wolf.

Given the author's track record, we can expect the story to reliably update on schedule. So you can begin reading it confident that the story is unlikely to go on hiatus or update so slowly that you'll forget the story between updates.

Thus far this is another introvert-separated-from-family-tries-to-survive-and-get-powerful-after-the-system-is-suddenly-introduced story, like RoWW. I assume that the MC will eventually become OP, but she isn't yet. And it should be a fun rise to personal power.

There is a fair amount of mystery in the story thus far:

Who freed her from captivity and why? Why did the person who helped her afterward help her? The amount of time and effort and supplies he spent on her seems beyond what I would expect for simple kindness toward a random native.

Thus far the system and the events in the spoiler are fairly confusing to both the MC and to me, but I suspect that I'll come to understand them eventually, as the MC gradually figures things out.

I assigned 4 stars because RR won't let me submit this review without a rating, and there aren't enough pages yet for me to feel like I can justify a 5-star rating.