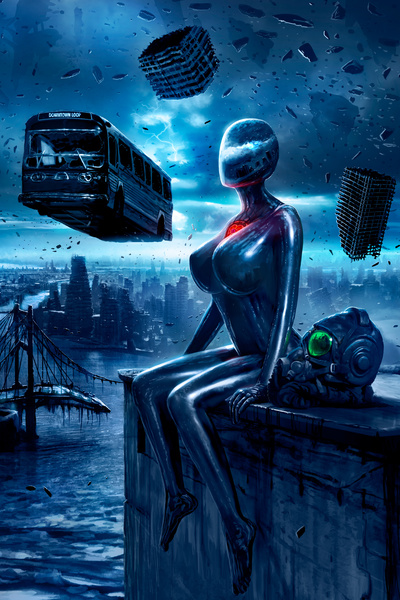 197. In which Charles attempts to make a Utopia

Being out of the sync with space-time wasn't a picnic.

"I'm never getting used to being dead!" I mentally responded.

I looked. The world around me was warped, twisting like an infinite, colorful pretzel.
It was annoying.
I closed my eyes, only to see through my eyelids.

"What the shit is this?" I demanded.

-= FuLL dE-SyNcHrOnIzAtIoN PeRmItS YoU To obsErVe yOuR FuTuRe aNd pAsT. ThE PaSt iS TiNtEd bLuE and tHe fUtUrE Is tInTeD OrAnGe fOr yOuR CoNvEnIeNcE. iT WiLl hElP YoU FiNd dOcToR AlExAnDeR GrOmOv wItH GrEaTeR EaSe. =-

Blue lines of my echo extended behind me, into my past, like footprints in the snow, my personal footprints... in time.
Orange lines of probabilities rushed ahead of me, into my potential future.
A web of knots presented itself to me, a looping, intertwining, vast web.
I was lost in its endless, spiraling complexity.

-= so MaNY thINGS To DO, sO litTLE tiME! =- The voices of the Biomatrix chimed.

"Do we not have infinite time and infinite options?" I spoke, pointing at the knots in time.

-= Oh CHARLEs, WoUlDN't THAt Be SWell? JumPiNg iN TIMe, togethEr, cORReCTInG wronGs, gIviNG OUT free PiES! why, we sHAN't STOp uNTIL EVERYoNE haS a hOt pIE on tHeIr wINDoWsILL! =-

"Correcting wrongs? I bet you just want to use me to take control of everyone's organs."

-= GUILTy as chaRGEd. THE cosT of iNfINITe PIEs IS SuBSERVieNcE oF alL ORgaNiC LIFe On eArTH.
aRE you PrEPAreD tO PAY the PricE? =-

I weighted out the cost of the apocalypse versus having freedom of individualism.

What would happen if I drastically changed things? I traced the blue line of my web ten thousand years into the past to the very first knot.

-= YeSsS. WHAT HAppEns if we GO bACK anD strikE haRD? Infect ALL lIFe WiTH ThE tETRaViRUs at THe BEginniNG OF it ALL? =-

The first knot vibrated, unfolding itself into a life that never was. I was inside my ancestor's mind, inside his DNA code.
This time, I wasn't just watching- temporal desynchronization gave me absolute control.

I stared at the mug in the ice.

The Biomatrix would spread, it would infect, change their minds, it would eradicate all dissidence, all misunderstanding, all pain, all death. It would unite all organic life on Earth into a single, beautiful collective conscience with absolute empathy.

There would be no conflicts, no wars, no technological advancement, no ANNET, no extermination of life.

The last thing I saw was a black wave taller than the clouds devouring my pants-free paradise world.

I was back in the frosty, glacier cave. Tears rolled from my eyes, instantly freezing on my face as they went down.
My beautiful resort planet was gone. What happened? What went wrong?
I banned pants and everything! For many years I lived in peace, only to watch my perfect world destroyed in a freakish, unnatural, global disaster.
I stared at my caveman reflection in anger. The mug glittered in the ice.
It was laughing at me, taunting my failure.
Stupid mug. This is your fault!
I picked up my spear and struck at it, fulled by rage. The ice cracked. Black liquid gushed from the crack in the ice, it ate away the spear, rushing forward, liquidating my control over my past self.

The line fizzed out.

"What the crap!?" I gasped. My lungs burned.

-= HmmM... oUr edIts Are BeING UNdOnE. pErhaps WE CAn'T givE EvERYOne IN The PAst DeLIcioUs PiES afTEr aLl. =-

Ten thousand years of memories were swirling in my head, unhelpfully.
Lines of probability spun out of control, twirling in my vision.
I attempted to focus on linearity of the current knot.
Lines of probability dimmed. Memories of another life begun to slowly drain away, vanishing like a dream, getting compressed somewhere in the Biomatrix archives labelled as "PARADISE LOST".

I looked up at the sky. The sky had floating, metal cubes.
"Cuuubes" I spoke in amazement.

"DON'T BE SO SQUARE!" an annoying, familiar voice with an annoying accent ranted from behind.
"I HAVE JUST WHAT YOU NEED TO INVERSE THAT FROWN!
COME NOW, YOUR CHARIOT AWAITS!"

With this, I got a hug from a someone. Oh yes, you're called Zee Captain.
And over there is... Pilot, with my chariot!
How quaint.

As Pilot and Captain rolled me through the dead city, I realized that my chariot was in fact a "Baby carriage".
Was I an overgrown sword-baby of some sort? ....I don't think so.

Pilot also had a thing called "Umbrella" and a "Cane" on his person for some unexplained reason.

These people must be my family here, I grumpily concluded from my baby carriage throne.

As my family offered me an "Ice-cream" in a "Boot" I started to slowly gain my wits.

After Ice-Cream, we went to a "SUPERCENTER" to obtain "BOXING DAY PRESENTS".

In the ruins of the shopping mall, Pilot drew a portrait of Captain and I.
As I stared at the portrait, I finally remembered who I was and what I had to do.

As fun as shopping sprees and insults between friends can be, I had to find Dr Engie. Or more specifically, Doctor Alexander Gromov.

Finding Gromov wasn't a complex task, thanks to seeing probabilities and noting patterns of the spiraling cubes.
Gromov was hanging out with his creation- ANNET, in a city square. She was wearing pants with shiny chains on them.
I grinded my teeth. This time, she was going to be the one terminated.
They were having some sort of discussion about email, just as I arrived.

-= DOn't BE A 3Rd wHEeL, joIN iN on THE fun!
uSE The sworD, CHArLeS. you KNow What tO Do! =-
The multi-voice of the Biomatrix whispered in my head.

I did. Grabbing Dr Gromov and threatening him with the sword was all part of the plan. Thanks to a glimpse of the world of Amber I knew of Admin commands that made school-buses fall from the sky. I knew that Dr Gromov as Primary Admin could use command-words to control ANNET. I knew that he could disable her and so I told him to shut her down like a regular computer.

He obeyed, in fear of my sword... and spoke the words "YES", starting the Neural Net Server shutdown sequence.

As the world around us begun to disintegrate into pixelated, white dust I've considered that perhaps I've made another hideous, planet-ending mistake.

Gromov screamed something incoherent as his body went limp. Cube-drones dissolved in the sky, streaking down like black meteors.
The City lurched, shaking in a massive earthquake. Skyscrapers shattered, falling left and right, sinking into the ground. The street cracked and exploded, revealing deep chasms. Grabbing Gromov by his collar, I jumped.
His body flopped like noodles. It seems the doctor passed out from the stress of murdering his abominable creation.
I pushed, accelerating and as a side effect of such, time effectively slowed down.
Bricks, dust and rocks spun in the air around us. I ran on the side of a falling skyscraper, pursued by a rampaging lightning storm.

"Can we outrun this?" I wondered.

The City around us folded explosively, atomizing itself into a neat, cube-shaped crater.