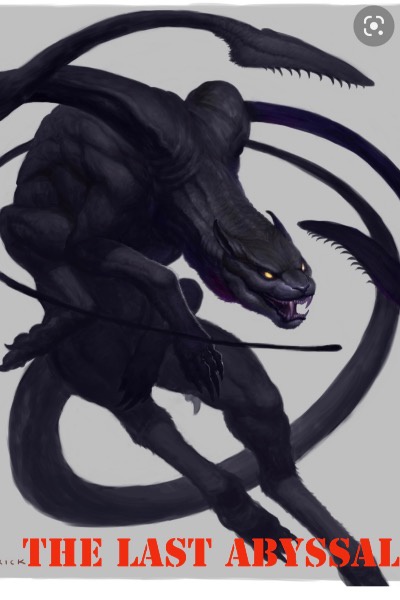 Chapter 25- The Last One Standing

Remove Ads
Previous Chapter
Next Chapter
A note from Astral 101

It was still early in the morning and the sun has yet reached the zenith of the sky, but the Evergreen mountain range which was quiet just a few moments ago became extremely rowdy.

Numerous low-level beasts could be seen fleeing the forest with all their might as if they were trying to escape something terrifying.

Meanwhile, In the outer area of the Evergreen Mountain range, numerous loud explosions, and angry roars could be heard over and over, there seemed to be two terrifying beasts fighting. One was a giant red ape while the other was an unknown beast.

That beast was over six feet tall and seven feet long, the unknown creature was pitch black from top to bottom and had six legs.

It had the body of a panther and glossy dragon scales black like obsidian including two terrible horns, black as onyx, crest its sloping forehead.

It had bone spurs growing on its back all the way to its five feet long tails which splits into a dozen tiny tentacles that ended in pads of sharp spiky edges.

Its bone spurs were sucking and emitting countless black lights, like ferocious spears piercing the sky.

The two beasts fought until the earth was cracked and the heaven was frozen, crushing and shattering a plethora of trees in their wake.

At this moment, blood sprayed like a spring in the air as the black beast’s body was struck flying away through numerous giant trees by the giant red ape’s poisonous kick.

The black beast’s entire body was covered with blood and some of the bone spurs on his back were broken. However, his opponent the giant red ape was not any better.

The giant red ape stood there, bloodied from top to bottom as if he had just gotten out of a pool of blood.

His body was mangled and lacerated. His rib cage was showing as a huge chunk of flesh was dug out from its stomach. Both of his legs had numerous gaping holes with blood spewing out from them.

His wounds would terrify anyone right now. It seemed that just a slight touch would make him crumble. Nonetheless, he acted as if they were no big deal, still standing upright.

‘You are indeed worthy of being a Gold Rank magic beast’ Primordius inwardly thought as he got up from the rubble while chewing on a bloody piece of flesh as he glared at the Giant Blood Raging Ape.

Despite losing so much blood and suffering from so many injuries, the giant blood-raging ape was still standing strong. He didn’t show any sign of weakening, instead, he became even stronger, especially after activating his Berserker State skill. He was like a machine with no sensory pain.

While Primordius was amazed by the giant Blood Raging Ape’s tenacity and sheer willpower, the Blood Raging Ape was even more shocked by Primordius's monstrous vitality, stamina, regenerative ability, and that damn teleportation ability.

His ghostly red eyes were blazing as he stared at Primordius. It hadn’t imagined that even its full-powered attack wouldn’t be to kill Primordius in one go.

No matter how many times he kicked him and pounded him, he always got back up as if nothing happened. To make matter worse, instead of him becoming weaker from all those beatings, he was becoming stronger and stronger by the minute.

This sort of phenomenon would instantly rout the confidence of anyone who hoped to defeat or kill such an opponent.

With such an abnormal regenerative ability and growth ability, just how could someone hope to fight against such a monster?

No matter who it was, in front of a being with such terrifying speed, nearly invincible defensive power, ridiculous endurance, and incredible recovery abilities, this sort of opponent would leave one wallowing in abject despair!

The Blood Raging Ape was at its wit's end at this moment as he didn’t know what to do anymore. The effect of his Berserker skill was almost running out. And if he couldn’t kill that cunning beast within that time then it would be his end.

Once the effect of the Berserk skill ran out, the side effect would cause his strength to weaken by half, not to mention he was also heavily injured and lost a lot of blood.

At this moment, the Blood Raging Ape felt as though he had met his worst opponent. Compared to this sly and cunning beast, he preferred fighting other magic beasts which relied on direct confrontation instead of sneak attacks and schemes.

‘Now let’s see how long you can last.’ Inwardly thought Primordius before swallowing the bloody piece of flesh before greedily licking his lips while looking at the Blood Raging Ape with his ravenous eyes.

To the Blood Raging Ape, Primordius’s attitude was overly infuriating. It was its first time being viewed as the prey instead of the hunter by a low-level magic beast. This was so insulting!

With a deafening angry roar, the Blood Raging Ape bellowed as it charged toward Primordius. And just like usual, Primordius used shadow jump to run away and evade his attack.

Despite being heavily injured, Primordius still didn’t dare to face the Blood Raging Ape head-on, especially after he had activated the Berserk State skill.

He knew that a skill such as the Berserk State which doubled the strength of the user was bound to have some serious side effects. As such, he intended to wear out the Blood Raging Ape first then effortlessly kill it later on.

Meanwhile, the Blood Raging Ape bellowed angrily as it continued to chase after Primordius. Although it seemed to be clumsy, due to its massive size, it traveled a huge distance with every step.

Its enormous hooves created massive crater-like hoof-prints in the ground with each pounding step, and soon, it chased Primordius all around the forest like a cat running after a mouse.

None of the giant trees were able to impede him as he charged through them. In front of the mountain-like Blood Raging Ape, these large trees were like blades of grass being stepped on and moved through by ordinary people.

‘He indeed lives up to the reputation of being a Blood Raging Ape. His physical strength and endurance are much greater than that of an ordinary Magic beast of the same rank.’ Primordius said to himself as he continued to evade the Blood Raging Ape who was going on a rampage using his shadow jump and speed.

However, Primordius had long disappeared. His figure turned into a series of afterimages as he vanished into the forest.

Deeply frustrated, the Blood Raging Ape let out an angry roar as he chased after Primordius again.

He was trembling with rage. His face was pale and his eyes were red. This pesky creature enraged so much that he wanted nothing more than to eat his flesh and drink his blood!

That damn bastard kept on using the same sneak attacks over and over. Yet, he could do nothing to stop it.

At first, he was able to land an attack or two when the cunning bastard sneak attacked him, but now he was unable to as his speed had mysteriously increased by leaps and bounds.

One could imagine just how frustrated the Blood Raging Ape was at the moment. He knew he was way stronger than that little ant, yet he couldn't do anything to him.

This battle or more precisely, the chase went on for two hours straight. Finally, the Blood Raging Ape fell to the ground. Not only he was extremely exhausted at the moment, but the effect of the Berserk State skill has also run out which left him extremely weak and vulnerable. At this moment, he didn't even have the power to thrust a chicken.

As for Primordius, well, though he looked bloodied and exhausted as well, he had a look of excitement in his eyes. In this long battle of speed and endurance, he was the last one smiling.

‘Finally.’ Primordius inwardly as he was looking at the giant Blood Raging Ape laying on the ground, barely breathing with a devilish look in his eyes.