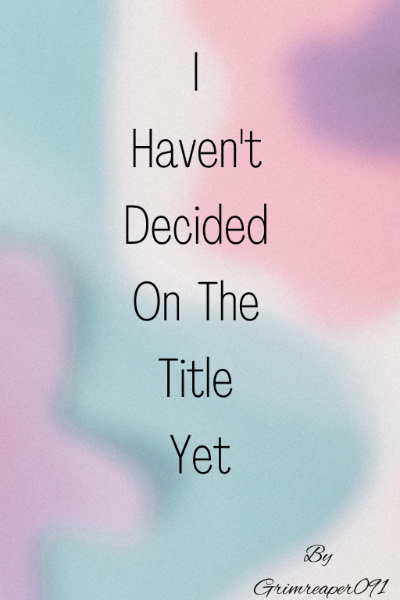 I Haven't Decided On The Title Yet

"bossss, boss their is the chest in front of us floating . may be it's treasure chest" one of the sailor said

"what are you doing go puck it up quick ,may be it's of pirate,we are filthy rich now"

"boss you will share it with us to, right?" another sailor said

boss brush him off by saying"yeah, yeah!!"

"what it don't have a single penny in it ,just some book"boss yelled at sailor

"nahh! it just a dairy of someone throw it away" boss said after taking a look at the book

"ummm! can i have it if you don't want it" a sailor boy coming out from the room in the ship frailly said

*His name was Sam, he was a kid with a big round spectacles and white hair he have been working on that ship as an errand boy since he was a kid*

"do whatever you want i don't care" boss said

*later at night in one of the ship's room*

" Huh! I Haven't Decided On The Title Yet ; that's a weird title" he said after opening the first page of the book

*He started reading the book*

"yesterday i turned 20 but then again i was 32 years old before coming her, ohh! i forgot it the another book; so Yesh! i got transmigrated after my death .i used to be a manga writer but then i died in an accident and end up here; i was orphan and i didn't had any friends but i will be lying if i said i don't have any regrets before dying; i wanted to create my masterpiece. So i was very excited when i got isekai'ed i mean this world i have been living in since my transmigration is typical story for a manga so i started writing down a dairy but nothing interesting has happened since my birth i mean i was good at magic and my father was surprised after seeing me using magic he even said 'may be you are a genius' but aren't main characters supposed to fight with villains even my mana isn't growing anymore i guess i need to start attending school from now on. well i burned my previous dairy cause of incident that happened yesterday.."

"yesterday, during my birthday party a guy was standing at door looking at someone after few minutes he entered in hall"

*His whole face was covered by bandage tape leaving only his one left eye and his red hair on the top of his head opened , even though his face was covered no one would disagree if i said he was just plain  handsome *

"The moment i saw him i don't know what it was but only one thought clicked my mind if i want to create my masterpiece i just have to no i must write about this guy ;this guy is going to be the main character of manga.

"i don't know what it was that made my mind want to write about that guy that day may be it was just a fluke or may that was my lucky day or may be just because he was a little good looking i mean i was single since my day one even on the earth; i don't know what it was but if i have to take a guess i will say it were my instincts as a manga writer that made me wright about him no it were A Writer's instincts"