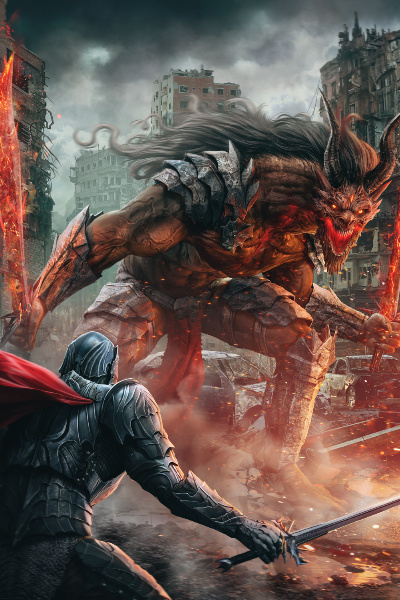 After fifteen minutes of continuous fighting, Jason had hacked, slashed, and blasted his way through the horde of skeletons. These level zero skeletons were no challenge for him as he was stronger and faster than these minions; making it so they weren't even worthy of being used as cannon fodder against him.

As the last skeleton fell into pieces with a final shield bash, he continued to sprint down the hallway, not even giving the piles of bones behind him a second glance as he received his experience points from The System.

Stopping his incantation, one of the cultists looked up towards the blue devil masked man. "Master, all of the undead have been destroyed."

Frowning, the blue masked man stopped his incantation and examined the array. After a moment he looked up and said, "At this rate we will still need several hours. Mcay, Friju, Geralt, step forward."

At his word these three men stepped forward, bowing to him with awestruck expressions.

"We thank you for your sacrifice."

At this phrase, the three men exploded into blood mist that quickly was swallowed up by the array. "Send the wretches, they should be able to hold the intruders at bay long enough for us to complete the ritual."

The blue devil masked man watched fourteen wretches run into the tunnel leading to the surface. He knew that those numbers would prove difficult for any large group of people. Hopefully this would buy them enough time to complete the ritual, as with the sacrifice of their brethren they had just made, the summoning should be completed within the hour.

After confirming there was nothing wrong with the ritual, he continued with his part of the incantations.

As the wretches ran down the hallway, they would let out shrill screams which echoed far ahead of them. These screams were otherworldly and haunting, identifying the wretches as predators beginning their search for prey.

Jason knew what these screams were as he was very familiar with them. Wretches were numerous in the armies of Driblark's horde, outnumbering the allied forces alone by a ratio of three to one. Only the terrifying screams of the banshees would be able to surpass that of the numerous voices of the wretches.

It sounded like there were many moving down the hallway towards him. He figured the cultists must be pulling out every card they can to stall him long enough to summon the demon. He knew he couldn't be delayed by these wretches one second otherwise he might end up arriving too late.

Going over all the abilities he currently had access to, he began sprinting as fast as he could. The more distance he traveled without being obstructed, the better.

After about a minute, he saw the first wretch approaching. Behind this wretch he saw many more, some were running side by side, or directly behind one another.

Jason stopped so he could catch his breath and calmly waited for the wretches to approach. Upon seeing Jason, the first wretch let out a loud triumphant screech while clacking its pincers together and charged forward at a much faster speed than before.

As soon as the first wretch was about sixteen feet away, Jason slammed his shield into the ground to activate Spike Growth. Angled at a sixty-degree angle, spikes quickly began shooting half a foot out of the ground towards the wretches.

The wretches quickly slammed into the spikes, taking damage with every movement forwards they advanced. As some of the spikes broke, new ones would quickly grow and replace them.

Jason shot an ice spike at the first wretch, nailing it in the forehead. This spike drained the wretch of its vitality points, causing it to fall and impale itself on the spikes that had grown out of the ground.

The wretches behind this one quickly became obstructed by the body and were slowed down even further in their race to tear out Jason's throat. Climbing over each other, and slowing themselves down more, they ran straight into Jason's flame throw.

With close to no remaining vitality points as they reached Jason, they were quickly executed with his blade and holy seal combo.

Glancing at the message that had brought his experience up to 227/10, he chuckled. This was enough experience points to raise his level at least to level six, and all of his skills up to at least expert. If he had decided to go with the swordsman class as he had in the past, he would already be far ahead compared to the rest of the Users. 'This class better be worth it' he thought to himself.

He began quickly moving down the hallway after he picked up the loot the wretches had dropped. He had picked up several uncommon materials and an uncommon belt. This belt increased his constitution by 5 and gave him quick access to potions that he could store outside it; similar to a caped crusaders utility belt.

The blue demon masked man opened his eyes that had become bloodshot with rage. He sensed that the wretches had all been eliminated quickly, not even giving the intruders a run for their money.

He glanced at the brethren around him who were intently focused on their incantations. They had sacrificed so much to make this dream they had a reality. He as their leader had been the first one to see Driblark in a dream. Driblark promised him eternal life as a new member of his demon army, all he had to do was betray humanity and bring about a part of their downfall.

He was only a simple cleric at the time, living in a church and preaching to the people every day. All he wanted was to live a happy and blessed life, but that was only a pipe dream. He lived in a world where the rich and the powerful were able to do as they pleased and get away with it. What instigated his hate for humanity was when his brother was run over by a carriage in the walkway.

The owner of said carriage didn't even stop to see what they had hit, and after the guards had found the perpetrator, they wouldn't do anything to him. The man who owned the carriage was the son of the governor of this town, and since his father held the power and money of the town, the guards couldn't do anything to him without putting their own jobs and families on the line. Hrefner was unable to obtain justice for his brother, and so held every intention to obtain revenge.

This wasn't the only injustice that had befallen this community, there were many instances of those with power and influence getting away from the penalties of their actions. Cleric Hrefner would often hear of these injustices as a result of his position as cleric of the local church. After he had been visited in his dreams by Driblark he slowly obtained multiple followers who had the same desire to turn traitor.

They had planned for months, and only recently began their summoning of one of Driblarks Greater Demons. They should've had plenty of time to complete this, as they had paid off the guard to turn a blind eye to the local kidnappings.

All of their hard work and planning was coming to an end. 'The locals must've hired some adventurers after the inaction of the guards, and powerful ones at that!' Hrefner thought to himself.

Glancing at his comrades one last time, he muttered "I thank you all for your sacrifices."

With a look of surprise, they each looked up at Cleric Hrefner as they exploded into blood mist; leaving Hrefner alone in the room. This mist quickly condensed and was sucked into the array which quickly turned black and began to glow a deep crimson.

The blood from the corpses at the corners had all been sucked dry, leaving behind dried out mummies. The array flashed once and quickly condensed into a circular door which began emitting an ominous feeling of oppression.

Right now I'm working on getting to the point of writing more frequently.  Hope you all are enjoying the story so far!

PayPal
Patreon
What do you want to see more of?
Previous Chapter Fiction Index
About the author