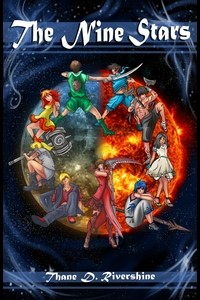 In a world where gods laugh at mortals, slayers will arise.

If you are a kind soul give me a vote on top web fiction! Link: http://topwebfiction.com/vote.php?for=the-nine-stars

Sidenote: Also I'm in need of an editor Pm me, Comment here, or on my fiction page I'll read them all.

[ Artist Link who did the cover: drezoregalia.com ]

[ Oracle125's thread who did Nena and Concepts of Vince and Rune: http://forum.royalroadl.com/showthread.php?tid=96758 ]

This review was done by request; it covers through the chapter ‘Chapter 7 scene 6’.

Grammar: 2.5 - Rough, but it gets somewhat better.

This story didn't really start on a good note for me, and a lot of that was from poor grammar and spelling. The second sentence has the characters 'donned in ragged patchworks', which is simply incorrect. As the story continues, it does improve; by the time I stopped, it was… better enough I wasn't continually distracted. It still had some problems, though, especially with punctuation/capitalization, tenses, and plurals.

I don't actually have a lot to say here, especially since it's hard for me to tell which of my problems come from style and which would be fixed by improving the grammar. I do think focusing more on clarity and brevity would help both areas; when I found myself confused, it was usually from convoluted sentences or oddly structured paragraphs.

I will say, though, that the chapters in this story are either pretty long or pretty short, depending on if you consider the software-separated chapters or the title-separated ones. If I was reading this as a serial, I’d probably stockpile a few releases, and then read them all at once.

Character: 3 - Somewhat caricatured, but not boring.

The characters are, on the whole, pretty simplistic. They each have one or two defining features, and that's pretty much it. Not that I'm really criticizing that approach; on the whole, it worked. I didn't get them confused too often, because they all stood out pretty well. And they had unique names, which was helpful. On the other hand, they don't have much depth, either; Ren, for example, likes swords and booze. That's basically everything his character is about: swords and booze. Would I like more subtlety? Yeah, probably, but I can see how it would be difficult to do, especially given the size of the cast.

Oh, and I'm including worldbuilding in here. It's about the same as the characters; flashy and eye-catching, but not particularly deep. It runs on a pretty standard wuxia (felt like I Shall Seal The Heavens?) thing, although it uses magic and mana as well for some reason. There’s also a touch of extra complication due to awakening, although how that works is never fully explained. There are lots of random details, which makes everything feel intriguing, but it didn’t seem like much of it actually revealed complex or deep mechanics, with the possible exception of the Old Gods. Anyways, it's fun, and manages to avoid being boring, despite feeling derivative to me.

So, this story doesn't really have a 'hook' per se; it takes several paragraphs before the plot starts. However, when it does, it starts with a bang, and leads right into a fairly major plot point, which is all to the good. The action continues at a fairly fast pace, with the main characters responding to their evolving circumstances. However - and this is the bit that I liked best - it's revealed early on that not all is as it seems with the family. That was a good twist.

However, after the initial conflict is pointedly ended by the children's new mentor, things get… much slower. This is where I started getting bored; it turns into a series of extreme power-ups, one after another, broken up mostly by silly or slice-of-life scenes. Which can be fine, but… there was a pretty drastic swing in tone.

There's some drips of foreshadowing in here; something about Rune and Vince's past, which I won't spoil, and a hint on Xue’s inner demons. That was good, if, again, a bit on the caricatured side.  However, the lack of conflict slows the pacing a lot, and makes it difficult to hold the reader’s interest.

All in all, I'd give this story a 3. There are some spots where it shines, and some where it's rough, but on the whole, it wasn't really standout. It may get better later on, but… I didn’t read that far, so I can't rate it on that.

If you're not picky and like the concept, it's definitely worth a look.

Nine MCs. Nine of them. Each one is unique and wonderfully crafted, as if the Thor's hammer came down from the heavens to strike a block of obsidian on which the characters would each be defined.

Several names will go down in history for giving humanity great things. First, Isac Newton. Second, Benjamin Franklin. Third, the author of this fiction. This fiction is history in the making; it's going to be bigger than Anne Frank's diary.

If I could only eat one thing for the rest of my life, it would be the paper that this story was printed on. If the United States ever needs a new person to put on a $1000.00 bill, it would be the author of this fiction's face. If one single document could convince North Korea to stop attacking South Korea, it would be this fiction with a signature line at the bottom. It's just that good.

You can't go wrong with this fiction. It's the best of the best. The cream of the crop.

I laughed, cried and crapped my pants all at the same time!

I don't know why I hadn't discovered this story yet...but I have to tell you it far surpassed my expectations. Every MC was better than I thought due to there either sad, epic or bittersweet beginnings. And if God would have it so, the same go for the endings. Because the stories that hit us in the feels like this one makes writing my own stories just that much more of an interesting experience. It fills my day with happy vibes and this stories vibes hit you harder than when I was punched in the face by Saitama.

Amazing Story Man I would love to see more of it

Overall not a bad story. While many people seem to love having multiple MC's I personally belive that if an author cannot create a single character who the audience can fall in love with, or if the only way to further a plot is to have 100 people tell you what is going on in their own view, than the author has too much on their plate. I prefer reading from a few perspectives as possible and while more modern novels are making this a trend most great novels stik to a single mc with a few 2-3 other views sprinkled in to give the audience what the mc missed fue to bias, location, etc.