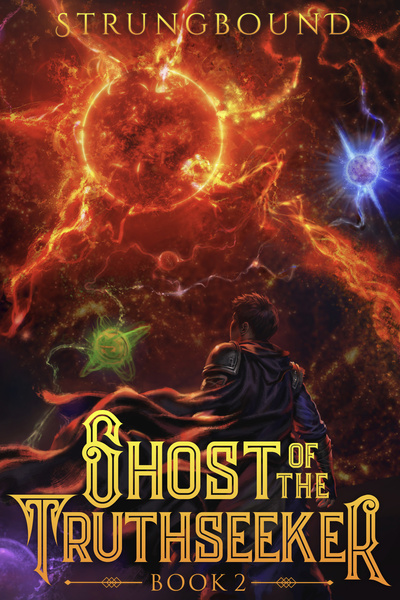 Ghost of the Truthseeker

They thought it was bad when an alien being descended upon Earth, killing billions of people. That was until the world was initiated into part of a universe-spanning Empire of cut-throat cultivators, beasts, and entities of ungodly power. Not to mention being forced to navigate a complex system of progression aided by a mysterious AI.

Alistair was just an ordinary college student, but he is now forced to find his way through an increasingly complicated world where power is obtained through conflict and death, where cultivation is key and the Peak is insurmountable. Alistair faces deadly encounters behind every corner on his path to survive and protect his loved ones, as he forges his own path to eternity.

This fiction suffers from a common problem in power fantasies: a ridiculous amount of plot armor for the main character. Unfortunately, in this fiction, the MC taking so many unnecessary, unintelligent risks only exacerbates this problem, because they don't lose inspite of their foolish decisions.

Some plot armor is inevitable in this type of story. The key part is managing the reader's suspension of disbelief such that it never reaches an unbelievable level. Everyone expects the MC to win in these stories, and although it would be surpising if they didn't, it would also be rather unsatisfying. When the MC consistently underestimates their opponents, fights at a disadvantage, and makes the same mistake multiple times, but still wins every time, the lack of stakes becomes apparent to the reader.

So actually, the title I've given my review isn't quite my critique but it expresses a similar sentiment and makes a better tag line. If I had to give a more accurate title I would probably say: "Too Much Plot Armor".

Authors can say whatever they want:

"This character has above average intelligence!"

"This character wants to learn magic!"

But none of this really counts for anything when the MC can't even work out how to pick up rocks and decides they're going to fight like a barbarian because... reasons.

Don't be fooled be the magic tease and high intelligence at the start, it's another generic brawler build with an MC who never actually worked learnt how to use tools. No doubt he would also be fighting naked and slathered in blood if the author didn't start him out with clothes on.

Overall the writing style is good, flows well and easy to keep reading even when the main character is terrible.

The story scores well, the worldbuilding is great and I'd probably love to read about it from a character who isn't a dumbass.

Unfortunatly that leads us to the character score, which drags it all down.

At the end of the day it feels like the author us suffering from the inverse of most show down tell. He's telling us the MC is intelligent, but we're being shown he's an idiot. This dissonance is hard to get past, and why I'm dropping the story.

Grammar is great as far as I've seen, though the early chapters have undoubtedly been edited a bit as I've seen comments including corrections etc.

Overall it's a fun 'turn off your brain' system apocalypse fic, but not much more than that.

Reviewed at: 9. Attack on General Krazz

The concept is not very orginal, but that doesn't stop it from being entertaining. Overall the writing is fairly well done and for the most part enjoyable.

The issue I take with it is how silly the fight scenes are, something rather important in a system apocalypse story about fighting. First off it's written like an old action movie where every enemy attacks one at a time. Regardless of where enemy's are supposed to be, the MC never seems to face more than one at a time. Secondly the moves the mc uses are just stupid. A Superman punch? Really? I get he's not a professional fighter but if you're gonna make him use stupid moves atleast don't let them work (I get there is a time and a place for, but you really expect me to believe an intelligent being just watched him run up and do that with no repercussions?). And whenever the author is not describing frankly ridiculous fights, we are told the mc just pummels his enemy into the dirt.
Overall it would be unfair to call it bad, but I can only suspend my disbelief so much.

A cultivation of doom!

Ghost of the Truthseeker is a great addition to the cultivation subgenre of LitRPG. The story has the hallmarks of apocalypse system to it as it starts with a cultivator tearing the world asunder and murdering billions as modern earth is devastated and initiated into the majestic Final Frontier Empire.

The story is well-written and the characters are likable. The MC, Alistair, who starts off as an ordinary college student and grows into a powah house is a great protagonist and I enjoy reading about his journey.

The side characters are also goodly rounded, well-developed and add a lot to the story. The world-building is excellent. The author has created a well-developed cultivation system that is easy to understand and follow.

The story is fast-paced and action-packed.

The spelling and grammar is really good in this book. I didn't spot too many errors with my soviet eyes - only a bit of roughness here and there.

The style of the book is pretty good too. The mc is a great example of an overpowered isekai protagonist.

He's likable and has a great goals.

I enjoyed this tale of interest. It's unique and interesting. The world-building is complex and well-thought-out.

I would mainly recommend this book to anyone who likes LitRPG, cultivation, xianxia, or isekai stories. If you're into these tasty genres like I am, check this book out.

This book revolves around a cultivation system apocalypse -- a genre I know well and enjoy. This is shaping up to be a great addition to the subgenre.

Due to the actions of an arrogant young master (going to Earth to blow off steam by murdering a billion defenseless people, yikes), Earth is indoctrinated into the system ahead of schedule and given premium status as consolation for the unfortunate tragedy.

Chaos erupts. Some people are teleported far away, others remain in their original location. Hordes of orcs appear, fodder sent by the multiversal overlords to test and temper humanity. Our MC is one of the people not teleported, and he's located in Boston. He has a good head on his shoulders and adapts quickly, becoming one of the highest leveled people on earth along with his companion.

The MC is likeable and I like the main side character as well. The MC has a hero of justice sort of build. He questions the system and world and thinks critically about what he sees.

The writing is good, no big errors that I spotted. The prose is clean and has the right amount of description.

If the premise sounds good, definitely give it a try.

Not my cup of tea

Usually I really like LitRPG and Cultivation stories(and them combined) but there wasnt any real tension, the descisions the mc made were questionable, and this does sound edgy but he was so classic perfect hero, its good if you like a lawful good mc with mad plot armor. Even with the flaws the writing flows and the dialouge works but if your not here for some lawful good mc dont read

This is really good so far, it's the type of story that resonates with me.  It's well written with no major gramatical errors and flows well.  One of the better stories on RR that I have come across and there are precious few.  Hopefully the author is in it for the long haul

Ghost of the Truthseeker's Song

Reviewed at: 12. Karma and Execution

This is pretty epic, but within its gruesome prose
There’s an innocence to it, it’s not just horror shows
Despite the heavy death toll, and the violent action
Something in it draws an optimistic reaction

It’s dense and full of cultivation and system jargon
You’ll love it once you understand the kind of ride you’re on
The lead is pretty solid, but the setting is just great
The book has a much bigger scale than you’d anticipate

Reviewed at: 25. Felons vs. Fellows

As some others have said the level of plot armor just detracts from the overall story for me. I understand what the author is going for with this character. I think they find a decent balance most of the time but sometimes it's just falls flat on it's face.

This story is sure to be a good read for some people. For me it just did not draw me in or engage enough. There were several tropes I just hate and that hurt the story for me as well.

I do appreciate your effort author and hope you keep writing.

Everybody is kung fu fighting

Interesting start for a webnovel focused on a fist fighting MC. The LITRPG elements aren't too heavy but frame the story and system very well. The prose is solid, well-balanced with nor problem regarding the grammar. This is a story where you can dive quite easily and withotu hesitation if you're a fan of the genre. I'd recommand you to give it a try as the author appears to eb really serious in terms of update. I'm really looking forward for mor eworld building as this seems highly promising.