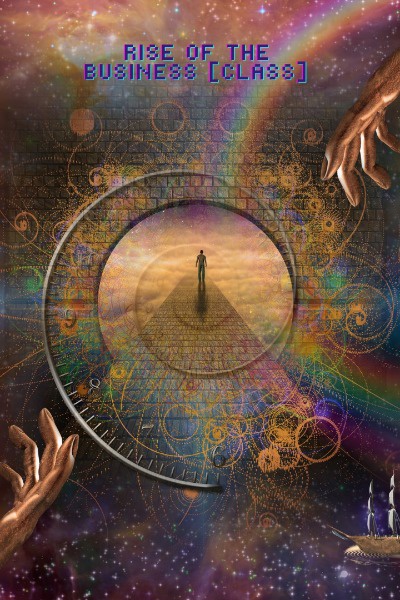 Rise of the Business [Class]

Remove Ads
Next Chapter
A note from Zalut

Welcome to the Rise of the Business [Class].

If you find yourself enjoying the story, please do leave a comment.

Nothing is more encouraging, and the story would not be what it is today without all your input!

An inn sat on a small, wooded hill right outside a town by the name of Salcret.

It had been getting harder not to feel lonely around the Hare’s Retreat lately. Harold had inherited the inn just six months ago, when his father passed away.

Now everywhere he looked… Every piece of furniture was a reminder of his boisterous old man. Looking back, life was easy back then, even if he did not know it. A normal day was just serving some drinks and feeding the stew, doing chores. With his father to play the host and do the rare heavy lifting they complemented each other perfectly.

Carrying on as usual had proven a greater challenge than Harold could have foreseen however; though that’s not to say the inn itself had deteriorated. Harold kept busy; polished cutlery and carried water and split the wood to light the fire. But who wanted to have their evening drink around a broody kid, who winced if you tried to make him smile?

The final nail had been the new inn opening up in Salcret’s town square, making the five-minute walk up the hill suddenly redundant if you wanted a drink of the local apple brew.

So, what the shit do I do now? He meant today, but not just. Harold polished another clean mug robotically, while the one new customer of the day kept his own mug warm with his hands while pretending not to be observing Harold.

Another half an hour passed with Harold keeping busy doing nothing, his mind wandering without a particular direction.

The plan was never for Harold to be an innkeeper, not past being able to help his father Ronald out, and scrounging up spare coins for whichever new idea for a Class had caught his fancy.

And now I'm stuck on a small island in the sea. With waves so high all around. Soon I'll need to borrow for winter, with no plan on how to pay it all back. Harold went over and gave the stranger a refill and then turned to leave, not having bothered to meet his eyes.

What a strange echo of my thoughts.

Harold felt like his brain was asleep, he wasn't ready yet for even the most basic human interaction. “Uhm, what did you say?”

“This is your place right, or are you just watching it for somebody?”

“No... yes, but no I don’t have plans. This was my father’s inn. He passed a few months back.” Even having to say the words hurt. Worse than usual today for some reason.

“I see,” The stranger hid a slight smirk with his mug as Harold returned to the bar.

Another half an hour passed. The door remained as desolate past lunch as before.

“Maybe I should sell it,” Harold eventually spoke up from behind the bar.

“What are you talking about?" Asked the older man, but Harold didn't elaborate.

"No, come now. How can you after all this, your family inn? What would your father say, after all the good times you had here,” The old man was shaking his head like he was reminiscing right alongside Harold. “If you just let it go then who knows what will happen to it, or to you?”

He let the words hang ominously, leaving the young man’s mind to consider the worst case scenarios. But Harold’s mind was not turning with the wheels that the stranger had been expecting. Rather than further melancholy it actually felt like his words spawned a kernel of determination in the lad. His Skill told him as much.

My father would have probably been the first to tell me to go, if he knew Oscar was taken care of. The day passed with Harold’s thoughts slowly churning. He needed to feed the hens, and stepped out back for a minute. On his return he gave the stranger a closer look. The man was nondescript, cloaked and with the appearance of a local. A darker but greying hair perhaps, and some bushy brows.

He had been nursing the second mug for quite a while now, dinner having come and gone without the man ordering anything else.

Harold was starting to wonder if the man would need a room for the night when two of the small, newly formed town guard suddenly entered the door and caused Harold to look up from habit, with a glint of hope in his eye, the sound a reminder of better days. Then the newcomers made reality reassert itself even faster than usual. Are they here for drinks? That would be a first in quite the while.

“Huh, there he is Captain, you called it.”

The woman just sighed in response to the younger guard's words. “Alright Dunner, you know the rules.”

“What, can a man not merely have a drink in some peace and quiet?” He challenged.

The senior guard whipped out a glowing green stone which slowly swirled to grey darkness and back again.

“Did you think we came without the Hexstone? Why would you not run it by us, or headwoman Tyresa, if you wanted to cast Spells locally?” Her whole stance and demeanour made a roll of the eyes superfluous. “Let’s go Dunner, leave the kid be.”

The man glared at the glowing mineral with clear annoyance. “My business is my own, you bruiser! What would be the point of magic if you always had to ask permission.”

Harold stood stunned as the man marched out in a mocking patrol. What just happened?

The younger guard was already following, but the woman caught Harold’s eye before she stepped outside.

“Kid, he’s a [Warlock]. He was using some Spell that was probably feeding off your emotion.” She looked at him expectantly.

She sighed. “I guess you’re too young, but no, the [Warlock]'s always been around. He came down recently when Bertrud died too,” Her eyes looked a bit annoyed at the memory. “I recall the whole family, over 30 members, devastated. And that man talking to each of them, or in groups, subtly egging them on in their grief, telling story after story of Bertrud’s youth; most of it completely made up, I’m pretty sure.”

“But how did you catch on to him?” Harold’s eyebrows were tickling his hairline by now.

“How do you think? He got greedy of course, he let the energy build until Agnes the [Healer] could tell something was going on and ratted him out. Hah.”

Harold actually smiled. “And then you went and got the Hexstone to check for his Spells?”

“Exactly. Anyway, just watch out. He’s mostly harmless, not freaky like in the stories you hear about the capital; but who knows what his Class needs that energy for,” The words would have been a lot more ominous if the tall woman wasn’t smiling like it was some joke. “All I’ll say is that if he wants to keep secrets he'll have to do it outside the town limits. And since you've been warned you're obligated to let us know if he tells you what specific Spell he's been casting as well."

“That’s fair enough I guess, uhm thanks for stopping by.” Harold's mind was waking up, but he was still a bit perplexed. What Spell could he have been using?

The door shut. The kid thing was getting old fast. Harold went to snuff out the fire and change out his clothes. It was time to supplement the winter stores, as best a rascal like Harold knew how.

Support "Rise of the Business [Class]"

Bio: Viking misfit in the modern age, would rather be slaying magic boars with an axe, but apparently the great challenge of this age is slaying bills.

I aim to write stories of empowerment in the face of scarcity.