All The Skills - A Deckbuilding LitRPG

Remove Ads
Previous Chapter
Next Chapter
A note from HonourRae

Sorry for the wait, everyone! I was caught up with the last bit of moving house (the unfun part where you have to clean up after yourself and try to get your security deposit back). To make up for it, I'm posting one chapter now, one chapter tonight, and another one Sunday.

Meanwhile, I have a shout out to go with this chapter! Mark of the Crijik  which is now out on kindle and audiobook! 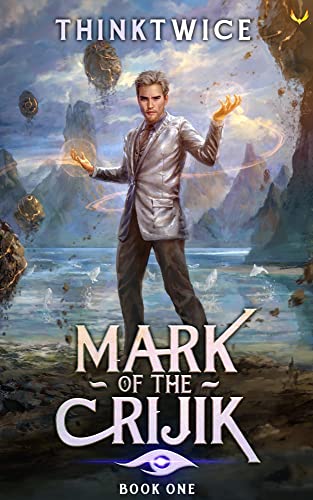 Andross Silver had a nice life until he was pushed over the side of his building. Reborn into a family that wants to kill him, gifted with a system and armed with determination he rises to the challenges of this strange world.

His only blessing is the Mark of the Crijik, a magical gift from a divine being that bestows great powers onto those that possess it.

By silent agreement, he and Cressida walked back towards the hive. Arthur's boots squelched with every step, but at least he no longer left a path behind himself of dripping water. A cold wind picked up out of nowhere — not unusual for the Wolf Moon hive, but it didn't feel good on wet skin. But he could endure.

No, Arthur's first problem was that he didn't actually live in the hive with other nobles. The apartment he used to share with Horatio was several blocks away.

Arthur's second problem was that he was awful at talking to girls. And Cressida was a very, very pretty girl.

She wore a flowery dress with some sort of cinch fabric thing in the middle that put emphasis in all the right places. Her hair was pinned up, showing clear, soft looking skin on the nape of her neck. Arthur was visibly trying not to shiver from the in the air chill... or stare.

"Our little group hasn’t seen you around much," Cressida said, breaking the silence between them. "I'd heard rumor that you left the hive entirely."

"Just been keeping to myself," Arthur muttered, ducking his chin as if in embarrassment. That last part had been a helpful hint from his Acting skill. "I didn't think I made a particularly good showing at the duels. So, I wasn't sure if I would be welcomed back."

He meant to be self-effacing. So, he was taken aback when Cressida gave him a surprised and mildly annoyed look. "Is that all? Everybody loses their first few duels, even those who have combat cards. Do you know how many hours of practice it took to get my flame summon to listen to me?"

He shook his head.

She flipped her hand in a circling gesture. There was a flash of orange and a miniature bear made of fire appeared. It was no bigger than an apple and stood up on its hind legs to peer up at her. With a chubby face paired with round ears, it was… A little cute.

"Help out my friend. He's freezing, so be gentle," she told the bear.

Arthur blamed the cold for making his thoughts slow and stupid. "Wait… What?"

In the next second, the miniature bear galloped through the air right at him. Arthur backed up a step and raised his hand to swat it down, but Cressida warned, "No," and caught his wrist.

The bear tucked its head and barreled straight at Arthur’s chest. The moment it hit his shirt, it dispersed into a puff of steam.

Warmth rolled over Arthur as if he had walked into a steam sauna. Wisps of steam rolled off of his shoulders and all of his muscles loosened at once.

The sensation lasted for a few heartbeats before it faded, leaving Arthur's clothing all the way down to the socks in his boots was now damp dry instead of soaking wet. The chilly wind was much more manageable.

He glanced at Cressida who grinned back at him, dropping his wrist. "My little bears make me popular in the winter," she said. "My father's land is North of here, nearly at the ice fields, so we have long winters."

She was perhaps underselling herself a bit. The ability to instantly warm someone would be invaluable in the northern ice-country.

Arthur's next question came out before he had time to think about it. "Your father must be insane to let you go. Why are you trying to be a dragon rider?"

Her friendly expression closed off. She didn't look cold, exactly, but the smile that she gave him was practiced in poised. "To do my duty and fight the scourge, of course. Aren't we all here for that reason?"

"Of course," he said, too quickly.

She gave him a look out of the corner of her eye, then seemed to shrug. "Anyway, you should come back into the fold. Now that the dratted Rare is hatching, the rest of us should have a chance."

"I thought there was still a line for who got to meet the hatchling first?"

Some of her humor returned. "There has been quite a few drop outs by people who were more interested in making connections with nobles rather than being a dragon rider." Another side-eye glance. "I hope that you weren't one of them."

"Good! Then we'll see you tonight at the promenade?" She clapped him on a shoulder. "I've got to tell everyone of your graceful dunking."

He groaned and she grinned, striding ahead. There was a knot of gossiping noble girls not too far away and she looked intent on joining them.

Oh, that's why she had been nice. She had a good piece of gossip to share. Horatio had endlessly carped about how small and boring the Wolf Hive was. If that was true, the visiting nobles must be bored out of their minds.

Arthur rolled his eyes, and, when he was certain Cressida wasn't looking, he ducked down the next side street and broke into a light jog. He intended to take as much opportunity as possible to level his new skills.

Arthur grinned into the wind as he ran. He didn’t think it was his imagination — he wasn’t just running a touch faster. Each stride felt smoother, too. It was as if his joints had been lubricated with cooking oil, and he simply knew how to set his foot exactly right on the ground to increase the proficiently of his stride.

As he dashed through the streets, he didn’t focus so much on where he was going but how he ran. His back straightened, stomach tightened, and he felt like he could draw in breath that much more easily into his lungs.

He was already half in love with his new Master of Body card, and he had only just begun to explore its uses.

When he reached his apartment, he practically flew up the stairs, taking two at a time. He didn’t earn a skill from stair climbing, but he thought that he might with a few more reputations.

Stair Climbing might seem like a silly skill, but so was Deck Shuffling and that had saved his life.

Arthur had thought about that moment with the guard off and on over the last few weeks. He would have never expected a mundane skill to come in handy. That had been a failure of imagination. After all, hadn’t he come close to defeating a summoned creature with his Butchering skill?

His Master of Skills card was utility only, but the concept of ‘utility’ could be stretched — especially once a skill leveled high enough.

That was the excuse he gave himself, a few minutes later, for why he leapt back and forth from his cot to Horatio’s empty cot and back again. Just like a little boy would do when pretending that the floor was on fire.

But Arthur was not a little boy anymore and the wooden cots groaned with every landing, as did the floorboards. Then the downstairs neighbor gave a muffled yelle and thumped the ceiling with a broom.

One more leap, Arthur promised himself.

He sprung from his bed to Horatio’s and heard a sharp crack from the cheap, protesting wood underneath.

Arthur pumped his fist in the air in triumph but dismissed the message. He did intend to add his next skill it to the class, but as a Tier 1 non-crafting class all the levels averaged out. He’d lower his overall score. He intended to level up his Leaping skill first.

… Was there a difference between jumping and leaping?

Arthur was about to find out — the downstairs neighbor be damned — but a slip of paper caught his eye. It had been pushed under the apartment door. He would have noticed it before, but he’d been too excited to check out his skills.

Stepping off the cot, he picked it up. It was a note penned in Kenzie’s handwriting.

Ernest Kane would have a spot at the hive. I got you a room on the second level. Pack up and get out of that hovel you call an apartment.

P.S. Remember that egg is probably hatching tonight. Be there.

Well, it looked like Ernest Kane was about to make an appearance.

Check back in a bit for the next chapter!

Support "All The Skills - A Deckbuilding LitRPG"