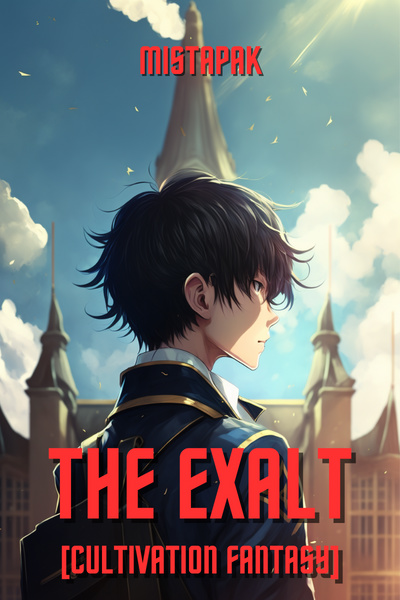 Remove Ads
Previous Chapter
Next Chapter
A note from Mistapak

Don't forget to follow, favorite, and rate if you're enjoying the story!
If you are hungry for more to read, my patreon has advanced chapters to enjoy!
https://www.patreon.com/Mistapak

Oscar breathed in and out, heaving his chest up and down. The air was eerily calm around the platform, yet a feeling of foreboding centered around it like the clear blue skies before the dark thunderous clouds would tear it apart. Across from him, he saw Charles looking apprehensive despite the display of confidence earlier.

Their Eins exploded out at the same time, everything they could muster. Oscar's blue Ein did not look as pretty or pristine as Charles' silver Ein, but it burned just as well. Oscar sat atop his deer anima, who let out a bellowing grunt, his arms and legs already showing the effects of Adamasreis.

Charles leaped up and rode upon the head of his amphiptere anima. His golden eyes remained locked on Oscar, who seemed inferior strictly from their steeds, but such a thought was mere folly in Charles' mind. There was no hint of disdain or lax in him, for he had acknowledged Oscar's prowess long ago.

Oscar's Ein transformed into a beautiful silver lance that enveloped his arm. He placed the silver lance atop his bulwark between the two antlers of his anima. His face tensed and showed signs of struggle as two lances formed on his deer anima, with the antlers wrapped around them.

Oscar put on a strong smile, but a drop of blood split from the corner of his mouth; the crushing pressure of the 'Treble Lance' with his Adamasreis nearly made it unbearable. But it was enough, as Oscar only needed a single moment for this battle.

At the same time Oscar was preparing his spells, Charles did the same; his amphiptere anima let out a piercing cry, hissing its long forked tongue. Motes of light gathered around it, specifically on its scales. Unlike Celestina's dragon, the amphiptere did not have a fiery breath but boosted incredible flexibility and hard scales, scales empowered by Charles' light.

The blades on Charles' unique dual-blade sword shone with radiance as light expanded out of them, forming two large blades of light, each around his height. Charles twirled the dual-blade, now enlarged by light, above his head; the rapid spinning sent out sharp undulations of light, laying cuts upon the platform.

A shining orb around the size of a fist appeared atop Charles' head with rays of light flowing out of it, and the places where the light touched became slightly scorched. The spell created an area around Charles where anyone who stepped in would be hit by the pearl's burning light and suffer the consequences for approaching. It was the most effective when dealing with a mass of monsters but just as good for deterring others.

Charles' arms were enveloped in armor made of light with cracks, which shone a golden color like his eyes. The spell worked like his 'Flash Steps', increasing the speed of his swings and thrusts, except that it also behaved as a protective measure for his arms. With his preparations complete, Charles pointed his large dual-blade of light out and commanded his serpent to fly straight and true.

Oscar also charged out at this time, riding atop his deer anima with his lances at the ready and his eyes facing forward. His brave charge against the serpentine monster resembled the many arts of noble knights charging against the dragon atop their steeds. Usually, their steeds were other dragons or powerful horse Exalt Beasts, but none ever depicted a deer.

His lances sliced and parted the air, and his bulwark shone, reflecting the light that burned from Charles and his anima. Once he closed in, Oscar felt his skin start to heat up even with his Ein wrapped around his body. Being near the pearl's range was bad enough, but once one of the dense rays of light touched Oscar, he felt his blood boil and his skin burn as hot smoke rose from where the light touched.

With a shout, crying out with all his might, Oscar came right before Charles and thrust his triple lances onto a singular point.

Charles raised his dense dual-blade of light up high, and his arms flashed in an unseeable swing as though the arms teleported forward. His blades of light met against Oscar's triple lance with incredible force and speed as his amphiptere anima whipped its sharp and scaly tail and bit its dragon maw down.

In a brutal confrontation, Oscar's triple lances, antlers, bulwark, and Adamasreis met against Charles' blades, fangs, tail, and burning light. The platform broke under them as tremors of Ein spilled out in waves, disturbing the other platforms, which had to be protected by the other proctors. The proctor for their match narrowed his eyes and put up a barrier of his own powerful Ein to stop them from disrupting the other matches.

A coat of silver enveloped Oscar and his deer anima, diminishing the burning light's effect and helping him withstand the collision's force. It almost seemed as though the air distorted around them, centering around where their attacks met. Cracks appeared on Oscar's lances and Charles' blades of light.

In the end, they were engulfed in a catastrophic shockwave of Ein, worrying the trio watching from outside. They had their defensive spells out to protect themselves from the rampaging Ein.

The platform had large cracks and split apart into some parts, but it still managed to hold on from the effects of Oscar and Charles' clash. However, the clouds of dust and flames of Ein had yet to die down, obscuring outsiders from looking inside. Frederick leaped onto the platform, followed by Emily and Serena; the battle was over, so they didn't need to worry.

The proctor clapped his hands and forcibly cleared up the platform.

Oscar watched from within as his view cleared up. His body was in tatters as his uniform had torn in several places, with burns all over his skin and a large cut across his chest that bled, dripping blood on the rubble. His deer anima crumbled into dust, forcing Oscar to feel the backlash in this core, but he forced himself to remain standing.

Oscar sighed as he gazed at Charles across from him.

The prince stood tall with his back straight like a spear reaching the heavens. But his eyes were shaky, and blood spilled from his mouth. His arms had multiple bleeding cuts despite the armor's defense, and his amphiptere anima's fangs had broken.

"So this is how strong you are. It's a shame, but if battles were only straightforward like jousts, you would certainly be terrifying to fight." Charles let out a breath of exhaustion. Oscar's power in an exchange of blows had shocked him. "My previous victories came from fighting as warriors, not bulls rushing at each other."

"Are you mad that you got wounded?" Oscar coughed and laughed through the blood in his mouth.

"A little." Charles looked frustrated and crossed his arms. "I do have pride as the prince and a Grade Eight Exolsia, after all."

"You're underestimating yourself." Oscar shook his head.

"Says you. I would be in serious trouble if I weren't more advanced than you as an Elite Exalt. Reis is incredible." Charles said.

Oscar nodded but felt a sharp pain in his heart. His breaths became short as wheezing and gasping came from his lungs. He turned to Frederick, who looked worried and smiled. "Take me to the healing station, please. I can't move."

"That was a good fight." Frederick gave a thumbs up. "But you're still a stubborn bastard." He supported Oscar by wrapping Oscar's arm around his shoulder.

"I'll be coming with you." Charles helped Oscar on the other side. "Let's head back and rest."

Emily laughed and led the way, dragging Serena, who was near drooling at Oscar's exposed muscles.

Oscar felt his eyes dimming as he nodded his head down. He had gained a lot from this Grand Gathering but had more to do before Ashen Grove. If he could not become a Middle Elite Exalt, he had to be the strongest of the Lower Elite Exalts.

Oscar rested at the healing station as the healers treated his burns and cuts. The Grand Gathering concluded with the crowning of the winners; Oscar was just one step away from reaching the minimum placement for rewards, as there was a lot of competition in the Lower Elite Exalt division. The Pavilion's efforts had borne fruit as many became Elite Exalts.

Surprisingly, the winner of the Greater Elite Exalt division was Gilbert, who had only recently advanced to that realm. Despite his recent advancement, Gilbert fought well against the others who had been in that realm for longer. His triumphant smile annoyed Celestina the most since it was directed at her.

Oscar slowly hid behind Phillip to avoid Gilbert recognizing him and sighed in relief as it was over.

Although it was a grand occasion, no one had the energy to cheer as they had solemn faces. On everyone's minds were the Ashen Grove and the Pavilion Master's words. They could not bring themselves to be excited about the Grand Gathering with ominous clouds overhead.

The next day, Oscar got up early, left a note for Serena that he was out, and strode over to the Foundry. It was time to collect on the promise with Aunt Rosett and learn Reis forging.

Bio: I have been an avid reader of all manners of stories. My main focus had been on reading translations of the Korean, Chinese, and Japanese web/light novels.

I have always been interested in the worlds people can create and the expansiveness of their imaginations.

Thus, I've decided to embark on this venture myself. Follow along as I take you on a journey into different worlds and meet all sorts of people.