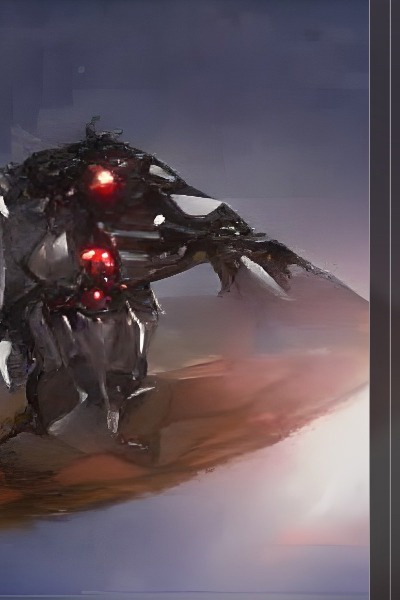 Raktas eased off of Ges’ gas pedal and glanced carefully around himself, noting the empty alleyways accompanied the slightly moving curtains. Quingalu had been a moderately profitable city before the Scouring, providing a safe haven for the middle class and moderately wealthy to conduct their business. As a scout for the Sound Bites, Raktas has seen more than his fair share of ravaged townships and hamlets, but it seemed to be a lucky break that none of the other roving gangs in the area hadn’t taken everything that wasn’t nailed down.

Quinglau had become a bit worn from the intervening months, evidence of a few battles and the elements making their mark’s known on the apartments and boutiques that lined this strip of road. Not a great sign, but there were no burning hulks and no defensive fortifications that might have indicated the townsfolk would put up a fight. In other words, a perfect mark for the nomadic Sound Bites.

Punching a button on the dashboard before throwing open the door to his massive luxury SUV, Raktas stepped out and swaggered down the length of the garishly yellow vehicle, trailing a hand along her sides. Unmarred except for the painstakingly painted black symbols of a snarling maw made of soundwaves on both sides of the vehicle, Raktas took a fierce pride in his ride.

Spending almost all of his share of the loot and downtime to maintain the vehicle, Ges was like home to Raktas. A symbol of dominance in this new age of depopulation and strife, Raktas had survived numerous life and death situations with the vehicle; so much so that he had ceased thinking of it as a mere vehicle, and began thinking of it as ‘her’.

Reaching Ges’s rear, Raktas bopped and jived as the rear hatch finished opening and a massive set of speakers began to push their way out. Retrieving a microphone from the now still equipment, Ratkas turned the speakers on; which began to emit a deep and throbbing bass backbeat. Climbing on top of Ges, Raktas threw his free hand out wide in a showman’s gesture and began to speak into his microphone.

“PEOPLE OF QUINGALU! I don’t know if you’ve noticed, but most of your city is probably dead!” Snickering into his microphone, Raktas continued. “ I know that damn solar wave did a number on us all, but The Scouring has provided us a time of opportunity! An opportunity for myself,” here Raktas made an extravagant and over the top bow, “and my friends the Sound Bites to get what we’ve always deserved! Wealth, Power, and Respect!”

Straightening up, Raktas pointed at the now visible faces in the many windows surrounding him. “And it has provided an opportunity for you all to gain some protection! I can’t speak for the Raging Raptors or the Devil’s Dogs, but the Sound Bites protect their own. All it will cost you is some weapons, food…and of course proper respect!” The music emanating from Ges began to raise in tempo, adding some high snares and synthesizer, perfectly timed by the dastardly duo to underline his offer.

Continuing his spiel, Raktas reached inside his shirt and extended a gold chain with a diamond inlaid sigil of the Sound Bite’s hanging from it, turning so the inhabitants were sure to see it shining brilliantly in the blazing afternoon sun.

“The Sound Bites treat their own well; before I came up, I was like you! Afraid! Weak! But no longer! My brothers and sisters will be along tomorrow to set up camp here, we only ask that you have proper tribute ready to make it worth our time.” A sample of Raktas’ voice now joined the track being blasted out, a simple audio recording of Raktas saying ‘Join Us!’ in various tones being repeated and layered.

Dropping his necklace and instead raising his index finger, Raktas finished his appeal to the city. “However, if you choose to deny us our due, and want to try to stick it out on your own? Well, you’ll get to see how the Sound Bites treat their enemies! With Sound and Fury!”

With that final proclamation, Raktas jumped down from the top of Ges, ready to step back inside his companion and put the pedal to the metal. Imagining how sick it would look to do a few donuts in the street before speeding away, Raktas failed to notice numerous long barrels beginning to creep their way out from windows and storefronts. What he did notice however was the crack of a rifle and the sudden hole appearing in the side of Ges. Diving into the driver’s seat, Raktas curled up as a hail of small arms fire peppered into the window and doors of Geas. Screaming in fear and rage at the damage Ges was suffering, Raktas stomped down on the gas with a free foot, still sheltering his head from the flying glass and lead.

The engine roared as Ges fishtailed momentarily, accompanied by a plume of white smoke from the rear tires as she fought for the necessary traction to escape; before Ges leapt forward down the now deadly boulevard. Poking his head above the dash, Raktas had only a moment to focus through the spiderwebs and holes that now adorned Ges’ front window to see a figure leap from an alleyway and throw down a long spike strip. Cursing, Raktas frantically spun the wheel to the side, just clipping the edge of the spikes with a rear tire. Yet that last second maneuver served a dual purpose, as an explosion rocked the space that Ges would have occupied had Raktas not sent her careening to the side.

Unable to correct their course in time, Raktas could only continue swearing at a rapid clip as Ges slid sideways into an antique store’s shop front and sent him flying into the depths of the showroom. Rolling across the plushly carpeted floor, Raktas’ vision transitioned rapidly from Ges wedged in the shop window and the rapidly approaching rear of the store until he was slammed into the wall with tremendous force.

Having the breath knocked from his lungs, it was all Raktas could do to gasp for air and use some useless metal showpiece to claw his way up onto shaky legs. Head still spinning, Raktas felt his gorge rise until and he spewed his all over his cover. Wiping his mouth, Raktas finally was able to focus on Ges, his trusted companion and ticket out of this hellhole; being torn to shreds by the slowly advancing townsfolk.

Slamming his fists down on the top of his metal bulwark, Raktas screamed out “STOP, YOUR KILLING HER! GES! I’M SO SORRY! I WISH IT WAS ME INSTEAD! I WISH YOU COULD JUST ROLL OUT OF HERE!” Suddenly, red light filled Raktas’ vision, and he took a few unstable steps back as the assault on Ges petered off until just a few late arriving bullets tinged off of her mutilated shell.

The desperate townsfolk before the store were forced to shield their eyes as the blood red light grew in intensity and size until their quarry, the broken vehicles, and the storefront were completely enveloped in the throbbing luminescence.

Character: I Be - Key Glock

Wanted to make sure I got this out there before tomorrow, as I'm going camping in Main for a few days, so I will go dark unfortunately once again.  hopefully I can outline/build a little bit of a back log, so should be running full speed once I link back up to my laptop.

Stay safe out there ya'll!

Bio: An avid consumer of fantasy and scifi; in book, screen, and gaming. Lots of ideas, many of which don't pan out.