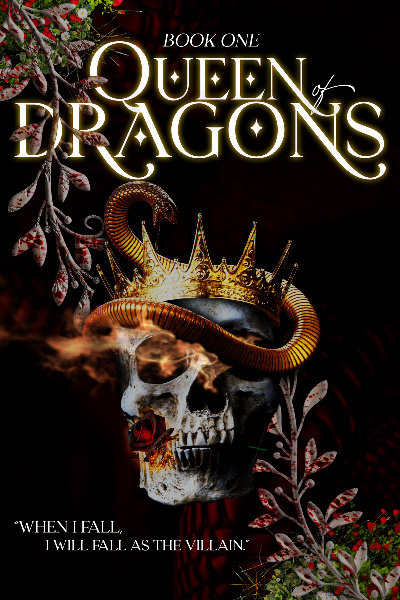 This crown was once adorned in blood.

My steps echoed through the foyer of a grand castle, each passing window slick with frost from the winter storm. The end of my skirt dragged against the gray stone flooring, abruptly stopping in the middle of a compass rose that rested beneath a vaulted ceiling.

Drawing my eyes up, I followed the intricately crafted portraits of my beginning. Painted skies that were decorated with clouds, dragons, and fire—chaos so beautiful that it could only exist in myth. I let out a chuckle. Lowering my gaze as soon as the throne room doors opened, I chased parallel rows of chandeliers that raced to the back until I caught sight of my king.

His slender fingers curled in a careless gesture, and the guards at either side of the doors tapped in unison to welcome my admittance. After a shallow sigh, I moved forward and approached Terren, curtsying out of respect before straightening my stance. His gaze narrowed, as if he were offended that I was not groveling at his feet, before clearing his throat. Long strands of blond hair spiraled in curls, tucking behind and into a ponytail, and his straight nose scrunched in disapproval at me.

"Venysa," his low voice grumbled, "thank you for coming."

"Anything for my king," I mumbled. "How can I be of assistance?"

Terren drew himself to his feet and stepped down shallow steps until he was less than an arm's length. "You have snow in your hair."

I loosed a breath and did little to conceal my glare. "The snow reaches my kneecaps."

His gaze flickered down to the skirt of my dress, raising a brow at the dry, untouched fabric, before smirking. "I have a job for you."

The air in my chest tightened around my heart, but I nodded and bit my tongue. A smart mouth would do me little good in the presence of my king.

Terren took a step away to pace back and forth, bringing his finger to stroke the stubble that lined his jaw. His hair was drawn back and out of his face. An essence of sweat lined his brow—he was nervous. "I sent my guard to the Naymeadows two nights ago."

The breath hitched in my throat. All I could do was nod again.

The Naymeadows. I shifted in my stance and forced a smile. "There are wicked things in those meadows, Your Majesty."

Used to be. Nonetheless, the thought of returning to such a place made me tremble.

When his emerald eyes lifted to mine, they were glazed like a thunderstorm. "Is my mercenary fearful of the unknown now?" he said with a sigh. "What a shame."

With this, I drew my hand behind my back and shook my head. "Of course not, my king. I will be on my way, then."

A grin. That was all I got... all I was worth. He twirled his hand into another careless gesture before the throne doors opened again behind me. When his back turned to me, gaze set upon a throne that should not be his, I snarled and made my way out of the room.

My heart lifted in the middle of my throat, resting there as my steps neared the one place I didn't want to be. To my left were the westward shores, waves ebbing away with the idle wind, and to the east were icy mountains. I had my sword holstered in its sheath, hand hovering over the handle in anticipation. Goosebumps trailed across my skin, and with each shiver and chatter to my teeth, I cursed my mere existence.

These lands were not the scariest—in fact, from all of the places I'd seen, they were some of the prettiest. In the summer these grasslands were poised with red, purple, and yellow blossoms that warmed my skin, and the mountains looked down upon me with their grassy peaks like I was worthy of it. Endyen Kingdom was my safe haven, and it was also the place I found my freedom.

I approached an overhang and peered down, eyes drifting across shadows and rocks that shot out of the earth in disdain. I dropped down the plateau, hands dragging against the rough terrain as I drifted down. For a moment, I almost lost all discipline and let my wings free.

But, when my feet made contact with the ground and eyes adjusted to the shadows that littered the space around me, a tang of rusty metal overcame my headspace. It poisoned my tongue and ruined my nose, and before I could retreat, my eyes watered.

I had to move forward—Terren was not the type of man who accepted defeat. I lifted my scarf to cover my nose and blinked away the tears, my free hand tightly grasping onto the handle of my weapon and considered using it to rid myself of this misery

But even I knew that wasn't how things worked. A metal sword wouldn't do more than annoy me... no, unfortunately, killing myself required a helping hand.

I couldn't tell where the scent was coming from. The grounds directly in front of me were riddled with dead grass and aged rock... nothing worthy of such an insufferable smell. When I made it to the second overhang, though, my heart leaped out of my chest and I stared before my worst nightmare.

When I was younger—approximately one hundred years younger—I rid the world of something that once held so much power. With my hands, and my hands alone, I let blood seep between my cruel digits and gladly ripped the heart out of so many beloved friends. But, with my trembling body and eyes pooling with tears, I stared upon the thing I thought would have died with my people. Racing down this valley of forgotten, dead foliage, were freshly sprouted, transparent, glistening minerals. Zhanzinite.

In less than a second, one sprouted out of the earth and expanded further up. With it, the tang grew stronger. When my focus drifted to the left, I found a body sprawled over one of the zhanzinite spikes, a pointed tip stabbed right through the gut of that lost soul. It was fresh, too, and although I could not get near him, I watched droplets of crimson fall to the floor and form an evergrowing puddle of blood.

My magic was supposed to get rid of this. It should have wiped everything out. I failed.

I suppose I couldn't be too surprised. After all, I let the biggest factor in my plan walk free. I was blinded by fear and rage, and with that came careless mistakes.

I winced when my wings expanded from my back, tearing the fabric of my dress with each cracking bone that expanded outwards. Without another passing moment, I lifted myself into the air and flew far enough away that I no longer smelled the poisonous minerals.

If I killed the Queen of Dragons one hundred years ago, perhaps my past would have remained dead. If I killed myself, I know it would have.

Holy moly. I didn’t expect the story to get this grim in the first chapter. Now, this is grimdark done right.

Hm, an interesting start! I assume the POV character is the Queen of Dragons (or ex-Queen)? (Upon reread, this seems unlikely!) Now why is she working for a chump like Terran? A bad backroom deal? A geas? Something else?

My heart lifted into the middle of my throat, resting there as my steps neared the one place I didn't want to be. I think using "in" here implies strongly that her heart was already in the middle of her throat, which seems anatomically unlikely! =)

Personally, though, my own recommendation would be, "My heart leaped into my throat" or something similar--perhaps a more dynamic verb than "lifted"!

and with each shiver and chatter tof my teeth, I'm not sure how you would chatter *to* your teeth. =)

supposed I cshouldn't be tsoo surprised.

I had failed. One hundred years had caome and wgonent, and it whasd been for nothing. I had hidden myself away—a coward... a selfish excuse for a queen—and it whasd been for nothing. My magic was shoupposeld tohave gottetn rid of this. It should have wiped everything out. I had failed. I supposed I cshouldn't have been tsoo surprised. After all, I had let the biggest factor in my plan walk free. I whasd been blinded by fear and rage, and with that had caome careless mistakes. The base narrative tense seems to be the simple past tense, but you've transitioned in this paragraph into the simple present tense. Basically, the musings about her past ought to be in past perfect (base narrative = simple past, so a past event would require the past perfect). Just my 2 cents here.

Thank you SO much! Fun fact - I actually changed/got rid of the "had" in the last paragraphs you edited... I second guess myself with those because I sometimes feel I use them too much..

I'm gonna go through and make these edits soon though! I appreciate the read and comment :)