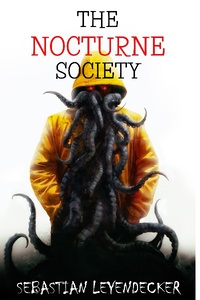 The Nocturne Society - Book I - THERE ARE NO MONSTERS

He knew he was losing too much blood to make it out of the motel. He then dropped to his knees, pressing one hand against his blood-soaked shirt, afraid of what might slip out of his body if he released the pressure, and with his free hand fumbled at his gun, trying to open the cylinder to reload. Revolvers were good when it came to reliability but sucked when it came to reloading. The first bullet slipped from his glitchy fingers that were still covered in blood. He leaned against the door and heard the steps of the thing.

Looking back, he took the next bullet out of his pocket, as he saw the shadow against the wall, giving him a spoiler as to what was about to come around the corner. The second bullet slipped into the chamber and Brockmann decided he had no time for a third. He turned his bleeding body around and raised the gun. One shot was all he had. He knew it was not enough to save him, but maybe enough to go out fighting.

“C’mon, you ugly bastard, I don’t have all night,” he hissed through his teeth and finally the monster stepped around the corner, now on all fours and turning the remotely human head towards him. Brockmann yelled out a battle cry and fired his last shot. It shook it off as it entered the wild blend of body parts making up the thing. Then it came charging.

Brockmann wished he had another bullet. It would feel good.

Brockmann had taken a week to watch the Old King Street. Day and night he had watched there and patrolled the harbor nearby. There was no sighting of the monster. After a week, however, he found hints everywhere in the newspapers, and he had a lot of time to read them.

The rate of missing people had tripled, approximately ten more than the year before. That was just the ones reported. The homeless were still disappearing, which was seen as a sign of prosperity. When asked, they told Brockmann about some of them going near the harbor and never showing up again. Some in the outer reaches of the town had also vanished. The homeless were nomads, it was usual for some to leave a place and not let anyone know. The numbers had been rising lately, though, and even a group mostly made up of mentally unstable people had realized that something was wrong. They had started to leave the city. Since they had left the harbor, there had been vanishing homeless in other parts of town, including fancy downtown sleeping spots that had been found emptied overnight.

Brockmann understood the culture of the homeless people better than that of the young people. He had once lived on the streets. He knew what despair and monotony there was, but also how easily fear spread among them, especially fear of the unknown. They lived on the fringes of society; they were natural prey. They usually didn’t realize this, but once it became apparent, it made them more than nervous. It frightened them.

Brockmann understood what had happened. The harbor had been deserted by victims, so the predator had done what any apex predator would do. It had made the effort and expanded its territory.

Simply said, Brockmann had shown up too late for the hunt. If all of Hamburg was now its territory, he would never find it by chance. It had 1.8 million inhabitants and 6 million in the surrounding regions. Having a landmass of 750 square kilometers. There were simply too many options.

So, he sat on his bench, hoping for a miracle and running circles in his mind, thinking of how he would find the monster.

Slowly, as the days went by, he accepted that he was not able to fulfill his confident promise to Fornby. Yes, maybe he figured out a way to find it if he kept on gathering evidence but it would take years and hundreds of lives, though.

Truth was, Fornby had been right. He had been good at dealing with these things; he had never been exactly great at finding them. He had to consider alternate routes. After all, Bleicher was still alive. He could use him as bait, but his confidence that the monster was looking for him was diminishing. Three victims Sandra had “predicted,” Landau, herself, and Brockmann himself. He still didn’t understand how she had known about him and he still didn’t buy her claim of psychic abilities. He could look into her and eventually he would have to. The same was true for Alex, who at least could have a remote connection to the monster, although that was very unlikely. Truth was, he had a lot of leads, but none to the monster.

The next problem was that the monster was really good at finding him. He had the feeling he was being watched all week and had blamed the usual paranoia that came with this job. But when he came home for the seventh night, he saw police everywhere. A plain clothes detective stormed out of his neighbor’s flat and threw up. Brockmann had bought some food after an 18-hour shift, but he almost dropped the bag when he saw the police. He didn’t need to ask questions; he knew right away what had happened. Someone had slaughtered his neighbor, a young man he had sometimes seen in the corridor. Brockmann lived in a shabby 19th-century building, that didn’t exactly house the cream of humanity. The old people who could not afford any better were the more civilized neighbors. It was the young ones who put on loud music so nobody heard what they really did. Mostly it was sex, but he had heard women being beaten and fights about drugs. The man next to him seemed alright. A young man with lots of stuff in his flat. He had identified himself to Brockmann as an “eBay power seller” once. Whatever power he was selling, he didn’t bother Brockmann and that was all that interested him.

Now police were swarming the place and he saw Raubach exit the flat, with a phone to his head. Brockmann turned away and waited for him to pass. Had he seen the suspect of the Landau murders here, he would probably have arrested him right away. A tip regarding Landau, an informant ripped apart and now his neighbors suffering from the same treatment?

When he passed the flat, he risked a look and saw a crime scene specialist taking a photo of a severed arm. A patrol officer stepped in front of him. “Move along, old man. Nothing to see here.” Brockmann grunted and followed the instructions. He had already confirmed that it had been the monster.

He made sure nobody was watching him when he came to his door, and quickly slipped into his flat. He had not rented it under his name, but it would not take long for the police to find out that the guy living here was dead and the account paying the rent belonged to a certain Brockmann. He wished he had taken these things more seriously. He had never imagined being back in active duty. Why would he? Decades of radio silence had given him no indication that he would ever return. He grabbed a sports bag, one he had packed for purposes such as this, an old habit, and knelt down to grab what was under his bed. He took out the metal box about the size of a shoebox and put it into the bag. Then he grabbed the plastic bag under there and pushed it into the bag too. It was heavy as it contained three or four pistols he had picked up along the way and had kept as a backup. He closed it, went to the fridge, and opened it. He took five small vodka bottles and put them in his jacket. Outside he heard steps. Then someone knocked at his door.

He smirked and went to the window. Fire stairs were rare in Germany, but he had picked the flat especially because it had some. He climbed out of the window, though his heavy bag and old bones hurt like hell. His back was hurting, his ribs were still sending occasional waves of pain through his body and right now they were on fire.

Climbing the fire stairs down with the bag was more of a challenge than it should have been. Down in the alley, he quickly made his way away from his flat.

Once Kommissar Raubach knew he was neighbors with the murdered man, they would start looking for him, which made this whole thing considerably more dangerous. Had the monster planned this? Was it that smart?

He made his way to the red-light district without stopping and went for the Hanse Hof, an elaborate name for a cheap motel that was sold for the night or the hour. He paid in cash and gave double the rate for a week, making it clear that he would expect no questions and no memories. The drunken, stinking receptionist nodded and took the money. “No children,” he said.

Brockmann felt so disgusted by the comment that he almost hit him. That was the adrenaline, he knew that. It made him angry and also made him edgy. He quickly took the keys and off he went to the room.

Brockmann put down the bag and got out painkillers, taking them with one of the small bottles of vodka. He sat on the bed, waiting for them to take effect, and closed his eyes.

He was losing the game. A grunt was all he was able to make, as he admitted it to himself and clenched his fist so hard that it hurt.

Bio: An author of a couple of modern horror novels that are called The Nocturne Society. Otherwise I am the mysterious type, really.