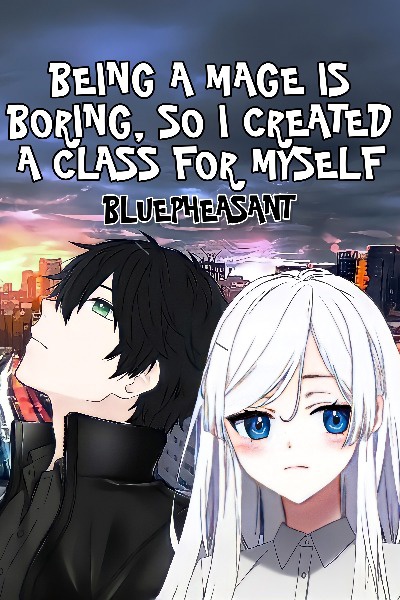 BEING A MAGE IS BORING, SO I CREATED A CLASS FOR MYSELF

"Where…am I?" I mumbled, glancing around the vast meadow I stood on. Long grass waved and danced as the breeze brushed past the grassland.

Am I hallucinating? Or is it a monster showing me an illusion? Just a few seconds ago, pretty sure, I was walking down that stairway inside a tunnel. What the hell is going on?

"Hello, Ryoki." A vague silhouette of a humanoid creature appeared before me. "This place is somewhere between the conscious and unconscious state inside your mind. Let's call it the twilight of consciousness."

"Who are you?" I asked, frowning at the creature.

"I'm your innermost psyche, your worries, your passion, your desires. I'm what makes you, you."

When the silhouette finished speaking, it changed its appearance, copying my image head to toe.

It felt like staring at the mirror, except the image on the mirror moved on its own accord and held a proper conversation.

Perhaps I unconsciously gave it my own appearance, the moment I learned it is my inner self. It proves how I created the whole situation subconsciously in my mind. That makes the thing in front of me just a physical form of my subconscious.

"So what do you want?" I asked my counterpart, staring at the green eyes. I tried to fix my unkempt hair a bit, realizing how bad it actually looked, but failed as the strong wind disheveled my hair even more.

"That was a rhetorical question, right?" He smiled slightly. "I'm sure you know what I want. No, rather what you want."

"Yes, what do you truly desire?" He stared back at me, closing in.

"I…" My voice trailed off, maybe overwhelmed by his sudden advance toward me. Picking myself up, I continued, "I don't know. I'm lost in thousands of questions. Who am I supposed to be? Why am I here on earth? What am I supposed to do here? Why was I even chosen to be a human?"

"What are you going to do knowing the answers?"

"Again, what are you going to do knowing the answers? Why do you need these answers?"

Why the hell does he keep asking me that? If you are my damn subconscious you should know all these already. Ugh, I have a feeling he will keep asking until I give a proper response.

"..." I stopped to think a bit before answering, "If we learn the truth behind our existence, won't it be easier to figure out the purpose of our life? We would just need to fulfill our callings."

"So you are just running away." Said the counterpart. His face no longer had that subtle smile. Instead, there was a little hint of pity in his eyes.

"Running…away?" I furrowed my brows. "Why would you say that?"

"Because you don't want to face reality. You are just shoving all the blame on those useless questions."

"Useless?" I retorted with a brittle smile. "You can't just call a whole group of philosophers' works of life useless."

"Yes, I can." He replied in full confidence. "You can't make a decision and walk the path toward your passion and dream. So you are just searching for the easy way, waiting for some divine calling?"

"My passion and dream? What are you talking about? All I wanted was a super fun character to play with. And I finally got it. Ya, I think this was my dream all along." I concluded, faking a bright smile.

Then I realized I was trying to fake a smile in front of my own subconscious. He just frowned a little before continuing the ongoing argument.

"Think again, buddy. What do you truly desire?"

"I don't think this Lucifer thing is working. I really can't think of anything else." I shrugged. "Why are you so set on the fact that I yearned for something in the first place?"

"I'm your inner self. I know deep down inside your heart something is hidden there, something you are crazy about, your true passion. It's just waiting there to be dug up."

"If you know, then why not help me rekindle my memories?"

"Well, even though I know there is something, I won't know what it exactly is until you find it out yourself. In the end, I'm just a physical image of your own consciousness."

Everything he said seemed perfectly reasonable and there was no reason for him to lie to me anyway.

"A desire for something that I can't even remember but it is still hidden there deep inside my heart." I let out a small breath. "And all this time, I was just wandering around passionless, boring myself out of my mind, not excited about anything."

"But you see," I continued, Interrupting my other-self. "Right now I am really excited about this new change in my life. This new playstyle races my heart. I can't even stop grinning like an idiot, flying around, doing whatever and however I want."

A distant voice called me, but I was too engrossed in the current matter to heed the call. So I just ignored it and continued with the subject at hand.

"Right now, I'm happy with that. I don't want to live like an NPC anymore, whom no one will ever remember. I'll become the main protagonist. Yes, I will create my own story."

Eventually, the voice, too loud to ignore anymore, jolted me back to reality, clearing away my drowsiness. I glanced around like a confused, force awakened person.

The surroundings suddenly got a whole lot darker for me to see through. And a pungent musty smell tingled my nose.

Adjusting myself to the dim light, I discovered myself inside the dimly lit tunnel stairway again. And Shinji at my front stood still, turning back at me.

"The hell man?" He scowled. "Were you sleeping while walking?"

It seems that Shinji woke me up. So, I was actually dreaming? Nah, it felt different than a dream. More like I entered a different world. An imaginary place?

"Probably, I dozed off for a moment there. I'm having a hard time keeping my eyes open." I kept walking, leaving Shinji behind. "But don't worry. I won't fall asleep during a battle like you."

"That happened only once, dammit!" He yelled out, taking long steps to catch up with me. "But man, we've been walking around for like 2 hours. When the hell would I get some action to do?"

"Setting off traps and escaping from them doesn't seem like enough action to you?" I grumbled.

"Not once, twice! How the heck did you even set off the same trap twice?"

I was genuinely impressed. It gotta be a skill.

"How was I supposed to know that we were running in rounds?" Retorted Shinji, trying to justify his misdoings, and then counter-attacked. "And you also set two traps off. Don't just blame me."

"Nah," I snickered, which turned into a bright grin in no time. "That was me pranking on you."

"Remember the time a land mine went off and I said maybe a rodent stepped on it? There was no landmine. It was just me using a skill to create an explosion." I explained, still with that huge grin on my face.

"Wha…!? Are you fucking serious?" He exclaimed, grabbing my shoulder and swiveling me back forcefully. "That scared the shit out of me, kept me on my toes the whole time!"

"I gotta admit it was quite the show."

Shinji took every step carefully, betting his life on every move he made. He even threw rocks around before taking the steps, jumping exactly where the rocks landed. While I went to great lengths to stifle my laughs behind him.

"Yeah, it is." Tapping his shoulder, I turned around again. "Remember, you almost killed me with those traps, daggers darting at me with insane speed, ceiling coming down on me, setting off chain bombs. I had to face those twice in a row. While I just did some harmless prank in return. Be glad."

Shinji opened his mouth and closed it again. It seemed like he was at a loss for words. After a few seconds, he opened his mouth again, "When did you cast that explosion skill anyway? We were talking the whole time."

"Heh, magic," I smirked, peeking at Shinji over my shoulder, and caught him rolling his eyes. "Don't worry. I'll disclose it to the squad soon enough."

Shinji just snorted and went ahead of me with long strides, brushing past me. Then we walked with complete silence again for a while. Slowly I grew dozy again, as I kept yawning repeatedly.

Dammit, I should have caffeinated myself before entering the game. Let's just spend the time staring at the stats for now.

For some reason, gawking at the stats and stuff kept me pumped up the last few weeks. It happened every time I found something new and exciting.

"Riri, show my Menu Window," I commanded my support AI.

"Alright, Master." She responded, and instantly a system window appeared before me.

I tapped on [Player Profile] in the menu interface.

Well, the real interesting things are the stats, right?

I touched the [Stats] option next to the [Player Profile] option on the system window.

I clicked on [Skills], next to [Stats] option, and tapped on a particular name with my index finger.

The most important thing right now is this.

Before I could check my spells next, an extremely loud scream rang through my ear. And immediately I recognized the owner of the voice.

"Hey!" Shinji tapped me on the shoulder with the back of his hand. "That's…"

Finishing his sentence, I lightly knocked on the tunnel wall beside us.

"Yup, the wall seems thin enough," I said, gesturing for Shinji to move back a little, swinging my hand.

Shinji understood what I wanted to do but still showed no interest in moving back, thinking he had all the time in the world before I could finish chanting.

Letting out a sigh, I extended my right arm and put my hand on the surface of the wall.

Whereas, I stood tall in the face of the explosion, with my arm still spread forward before the shattered wall. Soon a crack scribbled along the rest of the wall to reach the ceiling, and then it also began crumbling down upon me.

But instead of dread, a different, completely new feeling erupted inside me, as the corners of my lips kept widening until it formed into a huge wicked grin.

The saga has begun.

Join my discord for update pings and to communicate with me and my other readers~ https://discord.gg/9zKrJdch