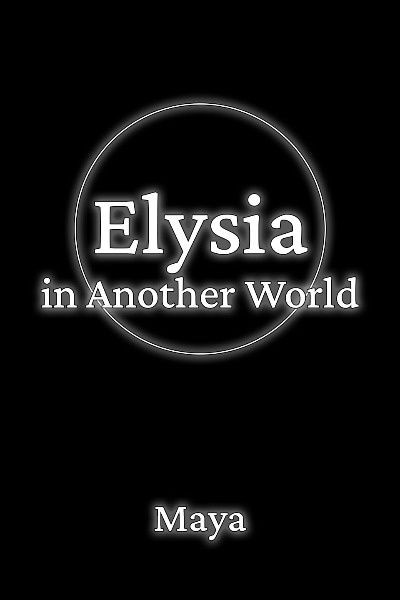 Elysia in Another World

“Happy birthday, my lady,” said one of the many guests. Kye nodded and thanked him quickly before he left to make way for the next person.

I have to allow so many people to greet me, and this dress is awful. I mean... Alethea said I look beautiful, but I really don’t like wearing dresses. Kye glanced beside her where Alethea was standing and smiled. Never mind how I look, she’s the beautiful one here. I wonder if they’ll let us get married now. We’re chronologically sixteen now, too, though we’ll be legally seventeen in less than a month. This world is weird.

That voice is familiar.

“Thank y-” She stopped short when she saw his face. “You!”

Alethea looked over and gasped.

“Who are you?” Kye asked, her expression leaving no room for anything less than an honest answer.

“Greetings, my lady. I am Shiro Shikigami,” he answered.

“Not here, Alethea,” Kye said. “Your name is Shiro Shikigami?”

“Shall we have a discussion in private?”

Kye waved her off. “Shall we?”

The man agreed and Kye announced that she would retire for a while.

“Who is that?” Layla asked as Kye and Alethea led the man out of the room with Liliana and Aliana following. Kye’s parents were just out of earshot and didn’t hear the name the man gave.

“I don’t either. His mana is strange. He’s hiding it quite well, but I can tell it’s not normal.”

“Will you go with them?”

“I probably shouldn’t. The look on Kye’s face is rather serious. I’ll have James listen. He’s better with covert magic than me.”

“Who are you... really?” Kye asked. “You clearly know something about us. Your parting gift in January eliminated any coincidence.”

“As I said before, I am Shiro Shikigami.”

“-sitting right here, I assure you. I don’t know who you are exactly, but you clearly know who I was once upon a time.”

“Indeed. That was a dark chapter. Might I ask who you were in that life?”

Shiro narrowed his eyes. “I think I can take it. After my time in Eden, I’ll be fine.”

“Before we answer that, answer something for us?” Kye asked, trading glares with him.

How in the world has he escaped Eden? Surely, he wasn’t released. I’m still not convinced that he is Shiro Shikigami. But at minimum, he knows of that world. Kye glanced at Alethea.

I don’t like this. If this is really Shiro Shikigami... Alethea sighed. I don’t want her to have to deal with that.

“If it is within my knowledge, I shall answer.”

Kye nodded. Let’s see how he answers this. “Why the attack? You’re clearly powerful. You could kill us yourself.”

He didn’t answer right away. He took a sip of tea and sat there in silence.

Quite the answer, Alethea thought. She’s right. He’s powerful enough to kill us even in Overdrive. So why the smoke and mirrors? What’s his game?

He took a deep breath and began to answer, but Kye cut him off. “Don’t have an answer?”

“I just don’t know what to say. There’s a variety of reasons.” He dropped his noble façade. “Let’s clear the air, shall we? The core of your question assumes I intended for you to die that day. I did not. I meant for none to die, in fact, and if my information is correct... none did. The only casualties were demon beasts.” He paused for a moment. They likely doubt who I am. They’re waiting to decide after giving me their previous names. There are a great many possibilities, but I doubt most of them.

“Why bother with the attack at all? If your goal was not to kill anyone, what was it?”

“To test you, nothing more. If you had died, that would constitute failure. You survived, as I expected, thus you pass. Simple really.” He took another sip of tea, never breaking eye contact.

“What do you want with us?” Alethea asked.

“Ah, that will have to wait until you’ve answered my question. I’ve already answered one of yours. It’s only fair.”

“Very well,” Kye said. She showed no fear as she stood and demonstrated the salute that her rebel forces used. “Shiori Sakaguchi, at your service.”

A wave of shock came over Shiro’s face as he flashed back to their final battle. “You... you’re... her?”

“Your Majesty, the rebel leader has breached the barrier. She’s coming! Shiori Sakaguchi is coming!” one of Shiro’s soldiers reported, having suddenly rushed in.

“What can we do?” “The rebels have all but won.” “The only forces we have left are in this city!” Panic took over the men before him, but he wasn’t worried in the slightest. He merely tapped his finger and emitted a wave of mana that silenced them.

“Do what you believe is best. If this empire is to fall, then it will fall.”

He held up his hand. “No. I expect that woman will be here shortly. I shall go wait for her in the throne room. There’s not a force on this planet that can stand up to Shiori Sakaguchi aside from myself and I don’t like my chances. The lot of you are dead if you join me. My only order at this point is to evacuate my castle, all of you included. Now go and be done with it. If I win, we shall rebuild. If not, well...” He walked away without another word. He left the room, went to sit upon his throne, and waited.

He didn’t have to wait long. The enormous stone doors to his throne room burst off their hinges and fell to the floor in a loud crash, breaking apart as they landed. On the other side stood two women, one with black hair and one with brown.

“That’s World Leader to you.” She glared at him as she approached. “The people of this planet desire freedom from your tyranny. As the representative of those people, you are hereby ordered to relinquish the throne or your life. Either way, the people will be free of you. What is your answer?”

He stood up and began walking toward her, katana in hand. “A meaningless question. I will not become your prisoner. If I must forfeit my throne, it will be by death. Shall we begin? I see no point in dragging this out with pointless prattle.”

“Very well. Shall we fight here or move to an unpopulated area? I would rather not involve civilians.”

Shiro smirked. “What’s the point of leaving? If my subjects wish for my removal, what care have I of them? No, this ends here.” Without another word, he leaped at Shiori with a dark aura bursting to life.

Shiori responded in kind, unleashed a golden aura, and met his blade with her own.

Shiro snapped out of it. He had not enjoyed his brief trip to memory lane and was glad to be rid of it. “My apologies. I seem to have...”

“I see my name had as much of an impact on you as yours did me.”

Shiro nodded. “Indeed. That life was riddled with mistakes.”

“You haven’t done too well in this life, either. That attack comes to mind.”

Kye did the same. “So, what no good are you up to in this life? Our situations are reversed. You could kill us quite easily.”

Alethea’s cup was full. She hadn’t taken a single sip. She was watching intentively the entire time, refusing to take her eyes off Shiro for a second. “Sayaka Sakaguchi.”

“I see.” He smiled as he remembered the good times from their past life together. The two of them had worked under him when he became the emperor. It was only later after the rebellion started that they opposed him. “It seems I have made a mistake.”

Kye’s glare gave him no room to weasel out of an explanation. “Go on.”

“The day the two of you were born to this world, you were kidnapped if only briefly.” Kye and Alethea were apprehensive about the topic. Kye had been taken in a pot and developed an irrational... not quite fear, but she was never comfortable around pots after that. “I arranged that. It was particularly difficult to arrange the abduction of a royal, but I didn’t expect to gain neither of you.”

It took everything she had not to react, but Kye somehow managed to hold herself back. However, Alethea had a different reaction. While Kye held back anger, Alethea was having trouble hiding the shock and fear in her eyes. Kye reached over and took her hand to reassure her.

“I knew well before you were born that you were reincarnations, but not in my wildest dreams did I imagine you would be Shiori and Sayaka.” He stood up, stepped away from his seat and table where there was enough space on the floor, and prostrated. “I offer my sincerest apologies.”

His apology came as a bigger shock for Alethea and even shocked Kye. Neither expected the tyrant of a man they knew before to make such an apology. Kye got over her shock quickly and narrowed her eyes. What’s he up to?

“You ask for our forgiveness only after discovering who we are. You should have asked before with no regard to our true identities. Did your time in Eden do nothing for you?”

Shiro looked up, not sure how to respond, and quietly returned to his seat.

“No, I don’t believe you desire our forgiveness. Do you have no sense of time? The world we shared was eons ago. You arranged for our kidnappings, despite spending so much time in Eden, yet you asked for our forgiveness? We have lived and died millions of times since that world. Do you think we don’t have the life experience to see through this farce? You would have had a much easier time convincing Shiori Sakaguchi than Kye Akari, but even then it would not have been easy.”

“I suppose you’re right.” He stood up and walked to the door. “I believe it best to end our discussion here. However, allow me to leave you with a parting gift.” He noticed they had immediately tensed up. “Information, nothing more. As fellow reincarnations, I intended to save you from your false families. My methods may not be considered just, but I assure you I am not the same man I was as the tyrant. You are under the protection of Allison Barrett, James Barrett, and Layla Barrett, correct? You may want to ask them about the system.” He opened the door, revealing not the hallways, but a world of purple land and sea. Before walking through, he released a small amount of white mana, enough to coat his body. “They know more about this power than they let on. You claim to have significant life experience. Use it. We shall meet again.” He abruptly closed the door.

Kye checked the door after he closed it, but it led back to the hallway, rather than the strange purple world. She closed the door and looked back at Alethea. “I think our mission is a lot bigger than we thought.”

Support "Elysia in Another World"