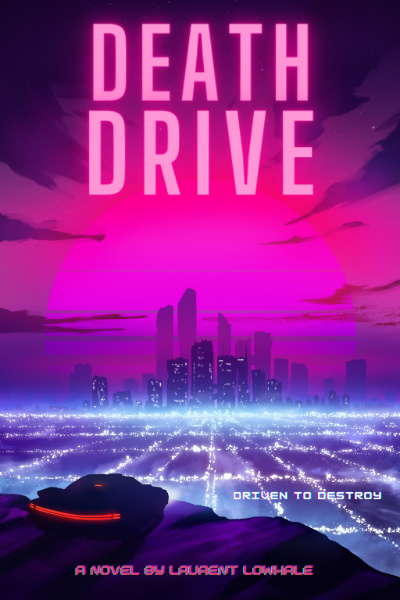 Thomas stood alone by the empty road in the outskirts of the city, looking around the crash site. Everything had been cleaned up so there wasn’t anything to see, just the weathered asphalt dividing the dusty wasteland into halves, stretching away from the city lights behind his back. The spare streetlights cast as much shadows as light. He craned his neck and stared up a post at a surveillance camera which had captured the crash. It stared back, as they always did.

A breeze blew some light desert sand and paper trash around. He dusted his leather jacket. He knew what was said about criminals returning to the site of the crime, but this was too important for him to let that stop him. He had made up his mind: the crash must have been set-up; the footage doctored to put the blame on him. As he had no way of finding the van which had caused the crash, his only lead was the victim.

He pulled the augmented reality glasses from the breast pocket of his jacket and put them on. After a brief boot-up he was transported to another world. Innumerable colorful pop-up windows adorned the wastes, with news, advertisements and glowing reviews bombarding his sights. Gone was the worn pavement, replaced by a carpet of light with brighter lines marking the edges, leading to an alluring heart of the virtual world which had been but a silhouette of lights in the distance, the city. The world in which most people lived their lives. Unreal, yet more acceptable to the many than the world which could touch and hurt them.

He ignored these mirages and walked straight towards the virtual wake arranged for the man killed in the crash. Written and videotaped messages of condolences and loss hung in the air, standing like pillars on the side of a road to a temple. At the end of the path, the virtual avatar of the departed stood with his back to Thomas. He looked around but failed to find any sort of biography, only meaningless photos of places abroad. Gentle music played in the background.

“I need to speak with you,” he told to the character. The specter didn’t react, and instead stood like it hadn’t heard him.

“Did I do this right?” he thought, fumbling with the settings of his gear for a moment. Then he tried again.

Setting his jaw, Thomas went to walk around the figure. But when he had reached the other side, the apparition was still facing away from him, like it had spun around.

“A glitch?” he thought, and completed his circle around with his eyes unblinkingly laid on the stand-in. Even though he could spot no movement from it, all he could see was the back of the creature, like there was nothing else to it.

The lights around him faded, and above him all the screens now showed the crash, looping that short clip of the collision over and over. The music had stopped at some point, leaving only eerie silence.

He lowered his eyes from the windows and the specter now stared at him with its broken face. The damage done to the head was not natural, with mangled flesh and sprouting blood, but artificial, the face torn apart by visual artefacts, making it impossible to get a good look at the person he had come to study.

The body of the figure stood perfectly still, while the corrupted head was stuck in a loop, convulsing around like an epileptic with frames missing from the animation. An eye which had broken away from the face and floated in the air stared right at him, not following the repetitive movement of the head.

He tapped his glasses.

“Piece of junk,” he thought, figuring that the whole spectacle must be a bug in the program.

“Leave,” came a voice from all directions at once.

“Who is doing this?” he asked, standing his ground without flinching.

“You have no place in this world. You should be dead.” Now that he was paying attention to it, he realized the voice was composed of dozens, if not hundreds of voices all speaking at once as if from a great distance, or over a bad connection. He turned up the volume of his earbuds, trying to study the speakers more closely, but that only made the static hiss more prominent.

“You know, this is even better than I thought,” he gloated, spreading his arms in a taunt to the synthespian revenant. “I figured my chance of finding even a trace of a hint were next to nothing, but here you are, all this obviously planned for me.”

The buzz in his earbuds was beginning to irritate him, so he removed one of them. He stepped closer to the spook, assuming that if there was some real person looking through its eyes he might as well go for intimidation. Its face was like a scotoma in migraine, a hole in vision where something is clearly missing and one feel’s like looking away.

“You clearly don’t have access to a decent internet connection so I’ll make this as clear as I can,” he said, towering over his cyberspace scarecrow. “If you want me dead, give me your address and then you can take your best shot.”

“The prey,” the voices rasped, “does not set the rules of the hunt. A successful hunter strikes unannounced.”

Before he had time to answer, Thomas became aware of thrum separate from the one which had pervaded the scene from the start. This thrum he knew very well, and immediately knew what it meant when it got louder by the heartbeat. He dove right and hit the ground as something invisible with a V6 engine—by the sound of it—missed him by a few inches, moments before a deafening crash sounded in his uncovered ear. Spitting dust from his mouth he got up and removed his glasses. The wake with its many floating windows and its defaced centerpiece disappeared from sight, being replaced with a much duller vista. At the bottom of the dusty slope by the road a red Ampere sedan spun its tires in the sand, trying to back its way up the bank. Its hood was smashed in from the drop and the sound of the motor had a sense of desperation in it as it was strained to its limit to make the climb. Experimentally, he put the glasses back on his nose and then peeked over them repeatedly. It was as he had guessed; he hadn’t noticed the car earlier because it had been camouflaged by his glasses. Now that he knew where to look he could see some pixilation in the area of the car where the virtual reality program hadn’t found the perfect hue of color to match the background, but it was something that drowned amongst the various special effects projected all over.

Below, the car continued to struggle and moan against the ascend, like a bloodhound pulling its chain. Then, without any apparent signal it reversed direction and drove into the wastes in an unhesitant straight line, the setting sun glinting against its roof before it disappeared behind the rolling desert hills. The wake was gone as well, replaced with the usual advertisements.

He headed for his car with the glasses pushed deep into his pocket, glancing occasionally around his shoulder. His heart beat excitedly in his chest, his stride confident and ready. For years the steady creeping ahead of technology and algorithms of different kinds into his personal matters as well as the society at large had left him with a sick feeling to his stomach, even thought they had come bearing apparent gifts, only asking a little bit of his privacy. But now, when that same technology came for his life, he felt more energetic and stronger than he had in a long time. He would find the person behind these attacks, wring some explanation from them and clear his name, and if he had to play along in this game they had devised for him, then so be it. His resolve wasn’t weakened by the fact he had just used up the last lead he had, but he knew that as someone had their sights set on him, they would need to come to him to pull the trigger.

“As such, there is just one thing I have to do,” he thought, shutting the door as he sat on the driver’s seat of his car.