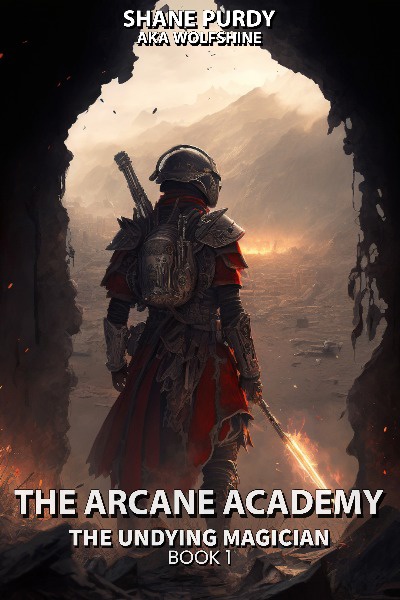 Remove Ads
Previous Chapter
Next Chapter
A note from WolfShine

Due to my schedule for this semester, there will be no Thursday chapters during the entire semester. Unless my classes on Thursday are just canceled or something else comes up. This is because I have over 6 hours worth of pure lecture on Thursdays, not even including the coursework I have on top of that.

None of them say anything for a while after that until a zombie horse enters the clearing and they’re snapped out of their stupor by the sight of me shooting it in the head with a fire mana bullet spell, burning its brain to a crisp and sending it collapsing to the ground.

Out of nowhere, half of the men suddenly bow down to me and simultaneously state, “We’re sorry for any inconvenience we caused you, lord!” Meanwhile the other half looks conflicted – as if they aren’t sure if they should do the same or run away.

I blink in surprise at this before tilting my head.

That was a rather sudden change. And what’s with this lord thing?

I stare at them for a few seconds before shrugging and asking, “Would you mind answering some of my questions?”

If they’re just gonna throw themselves at my feet, I might as well get my answers now instead of sitting inside of some wherever they were planning on putting me for days on end. After all, it’s not like I need to sit alone somewhere for days to adjust to my new changes.

“Yes, lord magician!” the leader practically shouts, making me feel a tad uncomfortable. And it doesn’t help that the wind has shifted again to start blowing their scents in my direction, making my bloodlust begin to act up again.

I grit my teeth before saying, “Move over a bit first.”

They all look up with confusion spreading across their faces until they see the black veins and glowing eyes on my own and immediately understand, moving over so that the wind is blowing their scents a little downstream of me.

“Thank you,” I tell them with a faint sigh of relief. “Now, I’m guessing you all know about my memory loss, correct?” I state, playing up their own theory a little bit to get more information out of them.

After seeing them nod their heads, I continue, “Well, I would like to know more about this place. Both the political situation of wherever we are, the situation of the city that you spoke of, and anything else you might think I’d need to know.”

The leader hurriedly nods his head and says, “Of course, lord magician!” He then stands up and points off in the direction they came from, “Just a few clicks south and you’ll find our city, New Hope. It’s a place meant for people who are trying to get out of under the thumbs of the many magician run cities around here.”

“Magicians themselves have become a rarity around here, since the magicians running the cities tend to kill off most of the people who are born able to use mana,” the leader explains for me. “And the ones that aren’t killed off – unless they’re of some use to the magician or a member of their family – are never taught how to use magic or given a caller device in the first place.”

I blink at that.

“What’s a caller device?” I ask him before noticing his face grow a little confused at that. But the confusion clears up quickly as he explains, “It’s something that was made by the Fallen King before his death that allows magicians to cast spells at the cost of their life force. Isn’t that what you’re…”

He trails off as he realizes that I’m not wearing any device noticeably on my person. Then his eyes widen in shock.

“You can’t be… are you really from the Republic?!” he exclaims, making whispers raise from amongst the others, and even having a few of the men who hadn’t knelt begin pointing their weapons at me again.

I let out a sigh.

Guess I couldn’t hide it after all. But who would’ve guessed that they’d have their own device for casting spells?

“And if I am?” I ask, curious as to how they’d react since it’s obvious I won’t be able to lie myself out of this anymore.

His eyes grow even wider, and he actually begins shaking. But some of the others have entirely different reactions and begin shooting me. Which becomes annoying considering that they’re shredding my armor and clothes.

I blink in surprise at that thought.

Is it just me, or does this hurt less than it used to?

Do my changes include pain reduction? Because if that’s the case, then I might have to actually thank that bastard skeleton in the future. After I kill him for turning me into something that hungers for flesh and blood in the first place.

Anyways, all of the men’s eyes begin to bug out as they watch my wounds reverse themselves almost immediately after opening. Which is to be expected.

I’m tired of hiding my immortality at this point. I’ve been stressing out over this shit for way too long now and I kind of just want to find somewhere to relax for the first time in months. But I still have to deal with these idiots. And then I have to grow stronger in order to save mom and dad, not to mention even being able to leave this continent on my own in the first place.

I let out a sigh at that thought before crossing my arms and saying, “Guess that’s answer enough then. Please continue answering my questions. What’s the highest class magician that you know of on this continent?”

None of them say anything. So I simply use my flare acceleration spell to give me a boost in jumping across the river, which ends up with me landing behind them instead of at the edge of the river next to them where I had planned on landing.

Another issue with gauging my new strength…

My bloodlust begins to kick in a little bit stronger at our proximity, but it’s still being held back a bit thanks to the wind blowing at my back towards them.

“Answer my questions already. I’m getting sick of this,” I tell them, being bluntly honest with how I feel right now.

After a few seconds, the leader stutters out, “A C-Class B m-magician.”

And now they’re terrified of me. Great.

At this point, considering that they shot at me, I don’t think I’d even feel anything towards killing them anymore. Of course, if they hadn’t done that then I would’ve. But not anymore.

“Speak up clearly,” I order him with a frown, still gritting my teeth ever so slightly to reign in my bloodlust. Because the last thing I need right now is to lose it and start eating one of them.

And so, the man begins speaking without stopping while the others are frozen stiff.

And to the first commenter from the last chapter, nice job! Laovi, The Eldritch Banana!

Bio: There isn't much to know about me.

I'm cynical, a bit of an introvert, and I love writing, programming, wolves, and spiders.

"In this game, there's no way to know the rules or how to win. Yet, there are seven billion players, all making whatever moves they want. If you win too much, or lose too much, there are penalties. You can't pass your turn, and if you complain, people look down on you. There's no parameters, or freaking genres, or anything. You know what you call that? You call that a crappy game."

"Genius is only one story above madness."

"It's more important to master the cards you're holding than to complain about the ones your opponent was dealt."

"No matter what you want in life, there's always someone else who already has it. And unfortunately, it usually means a lot less to that someone."

"Miracles are illusions caused by a lack of observation and reason. They're nothing but glorious misunderstandings."

"The way I figure it, life is a great big game board and we're pieces in play, all of us, but somebody got to the board before we did, before there were rules, and this somebody made up the rules and then told us that's how the game is played. But in reality, there are no rules."

I wonder if anyone can guess where any of these quotes are from?