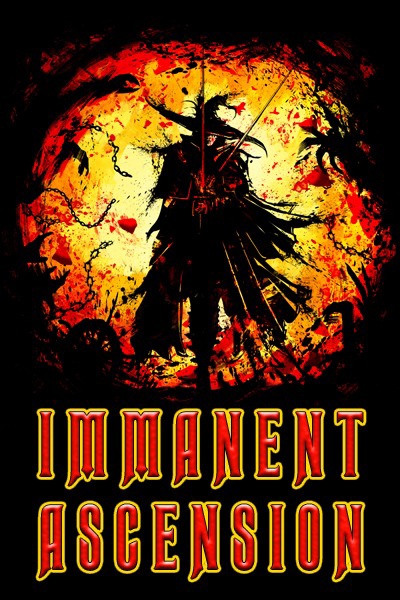 Remove Ads
Next Chapter
A note from DeathbladeISSTH

I'm so excited to be working on this new series. I've put a huge amount of thought into the overarching plot and worldbuilding. Plus the protagonist's journey as a person is a story I've been wanting to tell for years now. This is a "western cultivation" story, so expect a more traditional fantasy setting, but with a hidden backbone based on Chinese xianxia. I hope you enjoy it!

P.S. The title is not a typo. The first word is not imminent it's immanent.

“I ran into a mage once!” a farmer shouted from near the front. “Four foot tall, buck teeth, and talked with a lisp. Gave me some cheek, so punched him in the face! He dropped like a sack of turnips!”

The comment drew a handful of laughs in the crowded common room of the tavern. Xerxes wasn’t particularly amused, but wasn’t offended. He’d heard more than his fair share of ‘mage’ jokes. He’d even told a few.

On the stage was a bard wearing bedraggled finery. Instead of commenting on the joke, he chose to take a sip of wine and tune his lyre.

Xerxes’ friend Gandash didn’t take as kindly to the joke.

“Bastard,” he growled, his hand clenching into a fist. “I’ll show him what happens if you try to punch a mage.”

“Ignore him,” Xerxes said. He raised his tankard. “Come on, drink.”

Gandash’s hand relaxed as he lifted his own drinking vessel. “Yeah, sure. Cheers.”

The two friends clinked tankards and drank deeply. The common room’s aroma was a combination of firewood, roasted meat, curry, stale alcohol, sweaty people, and mold. There was also a touch of something exotic, a smell that common rooms in the capital didn’t have. Maybe it was from the ancient Yellow Forest that bordered the town, its odor carried in by the hunters and trappers that formed a constantly shifting migrant population here.

Xerxes wasn’t sure. All he knew was that this place smelled interesting.

Outside, the rain pounded down relentlessly, making him glad to be in the warmth, with a tankard of cool ale and a plate of food, instead of out on the road like they’d been for the past weeks.

Before they could put their drinking vessels down, a slurred voice rose from another corner of the room.

“Did ‘ya know that in Od, the mage women are all ‘ores? A shekel an ‘our they charge, at the temples!”

“Swear on the Pontifarch ‘imself! I’da sampled one meself, if I’d ‘ad a shekel to spare.”

“You’ve never even been to Od, ya lout!”

As a ripple of laughter passed through the room, then settled into a general buzz of conversation.

“These idiots,” Gandash said, putting his tankard down and tensing as if to stand up.

“It’s not worth it,” said Xerxes. “These people aren’t even Sighted. Who cares about them?”

Xerxes and Gandash were both Isin-born mages, but their fellow mage Bel was from Od, as was the officer in charge of the entire convoy, Captain Ishki.

“This is great, isn’t it?” Xerxes said. “Out on the open road, in an actual tavern. Sitting with the locals. Drinking ale. We’re actual mages now, Gandash, on a real mission for the Mage Parliament. Can you believe it?”

Gandash’s previous dark expression softened, and he grinned, his dark eyes glittering. “I can believe it, Xerk. What else did you think was gonna happen when the two of us made Seer?”

Before they could continue their conversation, the bard cleared his throat and said, “Given the talk of mages, good friends, shall I play you a ballad of magic and folklore?”

Xerxes chuckled. “Not all songs about magic are bad.”

The bard’s fingers danced briefly on the strings of the lute, and the patrons in the common room quieted.

“I can think of a few tunes pertaining to the eerie and miraculous,” the bard said. “Is there any particular number you’d prefer?”

As the bard plucked a few more strings, Gandash turned his eyes up in thought. Then he smacked the rough wood of the table before raising his hand. “Hey, bard,” he said loudly, “do you know Maribel’s Magic?”

The bard’s eyes lit up. “A classic! Very well, friends and neighbors, prepare your hearts and ears as I sing a ballad sung in starisles far and near! Hopefully you don’t mind if I put my own personal spin on the lyrics.”

“What does that mean?” Gandash said.

The bard stamped his foot on the wooden stage to create a basic rhythm, then he began strumming a melody.

Keeping his voice low, Xerxes said, “How does this guy know what people sing on other starisles, anyway? I doubt he’s ever been out of Isin, let alone off planet.”

The bard went from a seemingly random melody into the opening refrain for Maribel’s Magic, which was a lively tune intended to get the whole room singing. Other patrons were already starting to tap feet or fingers to the rhythm.

After playing through the main melody, the bard started singing.

“Maribel was a mage unlike any other,

“She’d have made an excellent mother,

“But when I saw her casting a spell

“I knew she was a snuffer!”

Xerxes felt a hand on his shoulder as someone squeezed onto the bench next to him. He looked to his left to see a portly man settling next to him, wearing a rumpled soldier’s uniform. He had a bit of a hunch to his back, and pocked skin that made him seem unhealthy. But both young mages knew that he was a veteran of multiple wars, and was a beast with sword and javelin alike.

“This fellow ain’t ‘alf bad,” the soldier said, talking in a soft lisp thanks to the fact that he was missing both of his front teeth.

Immense thanks to my supporters on Patreon:

Super thanks to my amazing Alpha Readers, all of whom have been with me for multiple projects now. My stories wouldn't be what they are without their help: Jeddrick, Lorin, Salineprune, Stompound, Sara K.

A quick note about Patreon: I started using Patreon as a content creator in 2016, and have used it for multiple projects over the years. Since Immanent Ascension is going to be my new focus going forward, I've revamped my Patreon to focus around this series. I'm a fulltime writer, and I have two kids, so things like Patreon literally put food on the table for my family. However, I never expect anybody to do the Patreon thing.

I'm new to RR but not new to writing. If you're interested in checking out my other works, head to my website.

I'm glad to be here and looking forward to sharing some cool stories!