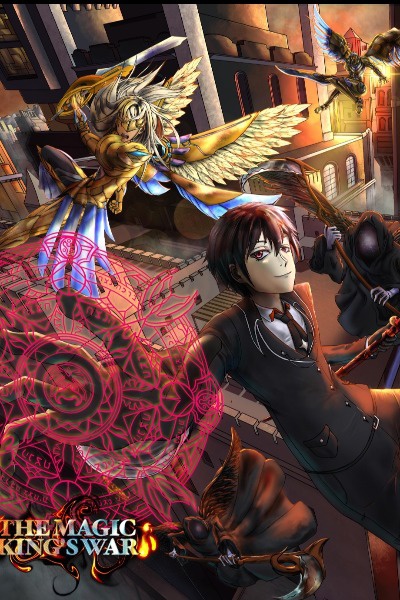 Remove Ads
Previous Chapter
Next Chapter
A note from Velocity10

Thank you for the recent views I receive please follow me would mean the world to me. Thank you

After Valoran protected Atticus from Kanan's final strike Kanan's fury grew exponentially and was about to attack Valoran when a mysterious female voice says:

Kanan instantly obeys the order and calms himself.

A beautiful human woman with blue hair enters the arena and by her side are two elves one of them is a male and the other is a female.

"Whatever happens stand behind me"-Valoran says to Atticus.

The blue hair female introduces herself.

"My name is Merial Seal. I am a third-year student at the Halivaara second Academy."

"My name is Valoran Silver. I am a first-year student"-Valoran says.

Merial chuckles a little and then talks about the intervention in the battle between Atticus and Kanan.

"You sure made Kanan angry with your little invention. Boy."-Merial says.

Kanan is getting angrier and angrier by the second.

"I will crush him"- Kanan says.

" Don't fool yourself, Kanan. He stopped your powerful attack with ease and with a slight movement of his blade sent you flying backwards with tremendous velocity and strength to boot."- Merial says.

Valoran keeps calm and still smirks toward all of them.

"It seems you have a firm grip and a powerful connection within the Academy given that you can order around Students which are not in your year group"-Valoran says.

" Hahaha. A girl has her ways around"-Merial replies.

Selina, Biatrix and Artemisa then enter the arena.

"It seems your lackeys arrived"-Merial says.

"Believe me the ones you call " lackeys" are far superior compared to your bully over there, who requires self-confidence by bullying the ones who are weaker compared to himself. "-Valoran says.

That comment was the breaking point for Kanan and it sends him on a rampage.

Kanan then launches toward Valoran with a sword in hand at a very fast pace so fast in fact he was invisible to the naked eye.

Valoran once again blocks Kanan's attack with no effort whatsoever.

" You might be fast. But not even close enough to catch me off guard."-Valoran says mockingly.

Everyone is shocked to see how easy Valoran blocked that attack with ease including Merial.

With that Kanan is being launched straight into the arena brick wall knocked out unconscious.

" Valoran was it? It seems I underestimated you. Your strength is quite impressive well.....for a first-year student. Don't think that you can beat both my elves let alone put a scratch on me"-Merial says mocking Valoran.

Selina becomes furious hearing that comment and starts to lash out at Merial.

"If you think that you can beat Valoran you are more foolish -"-Selina gets interrupted.

" That's enough Selina. I appreciate you coming to my defence but cheap taunts like those won't get me to react."Valoran says.

With that said, Selina stopped her verbal assault.

"If you truly think that you can beat me I challenge you to a duel...as well as Kanan and both your elvish friends next to you. At the same time.

The entire arena audience as well as Merial and her team was shocked to hear Valoran propose a challenge like that.

" Who is he?" "He's insane" " No way he's that strong"-The arena audience member mumbles to each other.

"WHAT!!..... DID VALORAN REALLY EXTENT SUCH A IMPOSSIBLE CHALLENGE"-The commentator asks in shock.

" You are a truly foolish boy"-Merial says.

"It's only foolish if it's impossible. Me challenging all of you at the same time is me giving you a fighting chance."-Valoran says smirking.

Kanan and the elves are now visibly angered by that comment.

The female elf starts to speak.

Lorian then also gets involved in the conversation.

"You demonstrated great strength today....however you either overestimate yourself or underestimate us"-Lorian says.

"I believe we have dragged this out long enough...Will accept my challenge?"-Valoran asks.

Merial sees that Valoran is dead serious about the challenge.

"Yes. We accept your challenge"-Merial says.

" WOAAA. WE HAVE A SPECTACULAR MATCH COMING UP"-The commentator and narrator announce in excitement.

The crowd is cheering and the people all over Halivaara who watch it on the broadcast system also can't wait to see that match.

"I can't wait" "This will be a great match" "This Valoran Silver seems to be strong" "I don't think strong enough to take on all of them at the same time"- People say to each other.

The commentator then asks Valoran a question.

" Valoran Silver. I know you look forward to this match.....however you must choose a partner since you that is what the rules state. Who will you choose"

"..Valoran let me be your partner"-Selina says.

" I will also fight with you"-Biatrix says.

"I have a better candidate in mind..."-Valoran says.

Selina and Biatrix are a little upset and shocked to hear that Valoran has a better candidate.

Valoran looks toward the audience and points to a specific group of people...People he has met before.....People he helped out before.

Valoran walks over to them he enters the audience seating area to meet the group of people.

He then reaches the group.....

One of the group then starts to speak (an older woman)

"How can we forget someone who helped us out during a time of need"-The woman said.

The group Valoran was talking to is the Lantia family. (The elvish family Valoran helped out earlier).

"It's nice to see you are doing well."-Valoran says.

" We are thanks to you Valoran"-Mary said. (The older sister)

"You have grown Vedika"-Valoran says. (the younger sister who Valoran helped when she was lost in the capital)

"My memory never lets me forget things. You were a little shorter when I met you"-Valoran replies.

" May I ask you to be my partner?"-Valoran asks Vedika.

"Everlyn I know but she won't have to I will make sure that not even a single hair strain is put out of place. I also understand that you as a mother want to protect her and understand why you won't let her go."-Valoran sincerely says.

"How can you be so sure?"-Everlyn asks.

"He - He protected me against multiple enemies who tried to hurt us. He saved my life. I've seen what he is capable of."-Mary replies.

" Why have I never heard of it?"-Everlyn asks.

"I'm sorry. I should have told you....I didn't want to trouble you with that event"-Mary replies.

" Thank you for saving her Valoran"-Everlyn gratefully says to Valoran.

" I want to go mommy"-Vedika says.

"Valoran I won't forgive you if anything happens to her. I am only letting her go because she wants to."-Everlyn says.

" You have my word."-Valoran replies.

With that Valoran takes Vedika by the hand and walks back into the arena.

The audience question why Valoran walking with a child into the arena.

Valoran and Vedika reach the arena.

"This will be my partner...How many points will be awarded for my victory?"-Valoran asks.

The commentator and narrator are shocked and think that Valoran is not taking this seriously and is joking.

"..How many points?"-Valoran asks again.

" Given the opponents and your partner if you shall win you will be awarded 20 points. The highest points ever awarded in the history of the magic duel existence"-The commentator says.

Selina and Biatrix are shocked to see his choice.

"You can't be serious"-Selina says.

"I am. Believe in me I will win for Atticus's sake and our academy's sake too"-Valoran says.

" Don't worry. Valoran will win with no issues whatsoever"-Artemsia replies.

" We can beat them"-Vedika says.

Merial and her teammates are insulted and amused at the same time.

"This child has a name which is Vedika and you wouldn't be able to harm her even if you tried."-Valoran says.

The match is about to begin.

Kanan also is fully healed thanks to <vita> healing magic.

The crowd is cheering and can't wait for the match to start.

" Show them what you got Valoran!!"-Aelina screams.

With that: Selina, Biatrix, Artemsia and Atticus leave the arena.

"Vedika stay by my side at all times."-Valoran says looking down toward Vedika.

Now it's Valoran and Vedika against Merial, Lorena, Lorien and Kanan.

With that, the countdown begins for this unusual match.