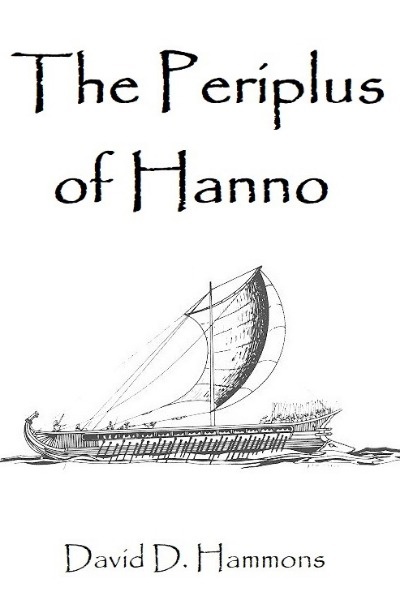 The Periplus of Hanno

Chapter 38: The Hopes of the Horn of the South

The smoke cleared. The fires dimmed, and the celebrations faded.

After affirming all but the councilman’s survival, the second trireme was ordered to return to Cerne at once, and to make sure the mountain’s shadows hadn’t reached them before its death.

Hanno offered what thanks he could to the beings who’d helped him. They departed once the mountain fell, but the king knew they’d meet at least once more. Or at least, he hoped they would.

Most of the crew stayed with the ship when Hanno led them to the Horn of the South. They beached on the outer island’s soft sand, wary of the return of Chariot’s worshippers. None came, and the island remained still but for Hanno’s intrusion.

Liva, Artemisia, Aba, Jabnit, Mapen, and Fierel accompanied Hanno. Instead of swimming, they prepared a raft.

In silent awe of the golden trees, they stepped onto the horn’s inner island.

“This is where it gave me the knife,” Hanno shared when they reached the rippling pool. “No wishes, remember that.”

“What hopes do you bring this time, Hanno, King of Carthage?” Pool greeted them.

Liva fell to her knees before the shallow water, and offered the golden knife upon her open palms.

“We thank you, Horn of the South,” she said.

“I did little,” the pool countered.

“You enabled us to defeat a creature greater than anything witnessed since creation,” Hanno said, and dropped to one knee. “And saved all of our lives.”

“I put them in danger too. But you would have done that anyway.”

“Your power is marvelous, Horn of the South,” Aba proclaimed. “Surely it must be sung of in the temples of Carthage. I shall have my children compose epics to praise you and thank you.”

“No need for that,” said the pool. “The things I reveal must be taken by the askers. Praise them, not me.”

“It is not I who deserve glory. It is my people,” Hanno said.

Hanno smiled. “Then can we ask one last thing, Horn of the South?”

“You never have to ask to ask. You merely have to do so.”

“I saw stars, and they gave me one great hope,” Hanno admitted. He leaned over the waters, and saw the purple twilight glistening in the golden trees’ reflection. “Will I see Bostar again?”

The waters rippled, and the reflection turned blank.

The pool flattened, but remained nothing more than empty water.

“You may hope. But it is not something I can summon,” said the Horn.

“Because it is not needed. Hold onto this hope, Hanno. But you need nothing from me to do so.”

“Speak then, the rest of you. Your hopes shake the ground, but I can’t show them if I don’t hear them. I am blind, remember?” Pool laughed.

All paused, wary to be the first to speak.

“I hope I can see my son again,” Artemisia said.

“I hope to return home safely, so my children and my temple can grow,” Abba added. “And I hope to see Artemisia’s children and mine sit down to a meal.”

The priestess wrapped her arms around the helmsman. Artemisia blushed, but accepted Aba’s embrace.

“I hope I get a golden pipe so I can play at the temple and entertain mother’s guests,” Jabnit said.

“And I hope we get home safely so I can write all this down!” Mapen added.

“And I hope I can plant one of these golden trees and grow more!” said Fierel.

The water remained blank, though it rippled from side to side. The surface never wavered, and it seemed to be waiting for Liva to speak.

“I hope for nothing more than that what I have now might last until the end of my days,” she said, and held Hanno’s hand.

“These,” said the Horn of the South, “are good hopes.”

The water stilled, and just beneath its surface lay a great treasure. Gemstones shimmered amidst rings and crowns. A great golden harp leaned against a chest bursting with jewels. A diamond stylus lay upon a golden tablet, along with a golden pipe glistening with silver-lined holes. All this lay piled atop more nuggets and bars of precious metal than all the mines of all the colonies of all the empires of all the Mediterranean.

The travelers looked at each other, and as one they reached into the pool.

Their hands came away filled with riches, and they laughed and laughed and stuffed their pockets until they burst.

“Thank you, Horn of the South,” Hanno said.

“This is no gift, Hanno, remember that,” said the pool. “It is what enables your hopes.”

One last object shimmered beneath the pool: a golden sheathe for Hanno’s knife.

“Make sure they are shared,” Pool added.

Hanno took the sheath, inserted the knife, and tied it at his belt. He ran his finger along the unbroken handle, and smiled at Liva.

“We’ll need a couple trips to get all this onto the ship,” Artemisia said. “Don’t think we’ll have much room for food after this, and our stores are running low.”

“Provisions seem to be the only thing to have failed on our journey,” Hanno laughed.

“Do we journey further?” Liva asked.

Hanno walked to the edge of the island. He watched the sun dip over the trees. He knew there was much beyond, further coasts, further songs to learn, further lines to add to his map.

“We have succeeded in what we set out to accomplish,” Hanno declared.

“Will the treasure and the colonies be enough to reclaim your power?” Liva asked.

Hanno held her hands in his. “It matters not. I am king, and you will be my queen. We should act as such. Come then, Helmsman. We have colonies to enrich, and feasts to be made in the halls of our people.”

Thanks for reading! New chapters will be added MWF. Please rank and review. If you would like to support my writing, please consider donating through Royal Road or supporting me via Patreon. I also have books available on Amazon, author name David D. Hammons, if you would like to read more of my work.

Bio: I once snuck into a castle. It wasn’t a terribly good castle. In fact it was quite old and broken, but it had a shut door I wasn’t supposed to go through. Yet through it I went. I climbed an ancient wall I shouldn’t have climbed, wandered across borders without using the approved path, and was handed a silver trophy for a contest I wasn’t allowed to enter. From my time growing up in the Missouri Ozarks to my travels abroad, I couldn’t help going places and doing things I probably shouldn’t. Perhaps more of those doors needed 'Keep Out' signs, or if they did have signs they should have been locked, and if they had been locked they shouldn’t have hidden such amazing things that made going through them so worthwhile. I currently live in Springfield, Missouri, where I teach Marketing, study History, and, alongside my wonderful wife, make a valiant attempt at passing through the doorway of writing.