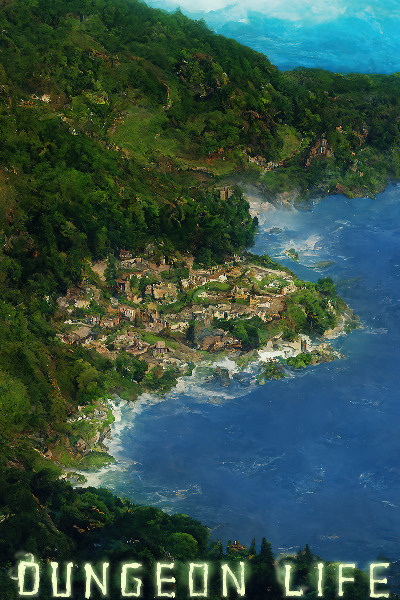 A normal guy gets hit by a truck and isekai'd.  Why?  Because trucks are apparently some cosmic loophole.  He decides to be a dungeon, because it sounds weird and interesting to be one.  Is it?  Let's find out.

Cover by the talented and very cool Vitaly S Alexus

A pretty unique dungeon core story, it's much less of a LitRPG than I expected, with more description than stats. Character interactions are fun and believable, progression is consistent and not too fast. There are bits of worldbuilding here and there, just enough to set up future arcs without anyone feeling blindsided. Overall, it's pretty much a chill slice-of-life, and I wouldn't have it any other way.

Reviewed at: Chapter Fourteen: From Bellow

Originally posted to the hfy subreddit this story is exceptional. Note that at the time of this review the author has 49 chapters on reddit and slowly moving them to Royal Road.

Style: high level and laid back. There also aren't any wild power leaps which I love. Its a steady, measured progression showing how dungeons in this world work and the symbiosis they have with the world at large.

Story: Slice of life in a lower octane environment. There are still stakes but its more measured. Perfect for theory building in a more 'feel good' story.

Grammar: Never had any complaints, the most that might happen is a typo for a character name being derped. When you find them its more humorous then anything.

Characters: The story is full of characters, most of them are supporting but they all have personality that fits with the world. You will very quickly find yourself developing favorites, especially among the scions.

All in all I can't recommend the story enough and have shared it with multiple people. It's an excellent introduction to the DungeonCore genre or a nice laid back addition to it. It also has a ton of references that make you smile and enjoy the fact that the protaganist is having fun when they can or being serious when they need to.

This was my introduction to Dungeoncore and after binging several other stories on this site it still remains one of my favorites.

This story was first posted on reddit, and is now being crossposted to Royal Road. I'd describe it as on the chiller side of dungeon core fic, more slice-of-life than intense trap design and campaigning on average. It doesn't get deep and specific into dungeon mechanics, which I think benefits the story as a whole when working together with its writing style. The stakes seem sort of low, but it puts a smile on my face to read and the wacky earth-culture-influenced mobs are fun.

For those familiar with "Dungeon Core" novels what I appreciate most about Dungeon Life is that it doesn't get bogged down in minutae, tables, or numbers. Sure those things likely exsist in the world's system, but they are largely unneccessary, if not an actual hinderance, to telling an enjoyable tale. Some people who are hardcore litrpg fans might be put off by the lack of details or percieved inconsistencies, but I'll take enjoyable characters and more actual writing over endless menus and tables.

Otherwise Dungeon life is relatively faithful to the tropes of the genre so readers should have some idea of what to expect. The novel isn't especially funny or action packed, or grim dark, or fluff. Instead it has slice of life feeling where the stakes don't feel too high, but aren't completely absent either.

I seriously liked how this story did read, just a laidback dungeon story without any big looming plot.without something to make the MC's starting situation unique beyond the reincarnation & location, with the dungeon starting from humble beginnings, its first interactions with outsiders and how a relation with them does slowly develop throughout the story, one of those rare slice of life dungeon stories that actually does work and hell even reads better than most regular dungeon stories.

On the start of my read here, i certainly didnt expect a dungeon story like this as the genre is rather full of the generic dungeon story with variation that makes it 'different', while this is another one of those given its location it is also entirely different from them all as it actually does work as a dungeon story that has meaningful progression.

This story avoids the trap that so many other dungeon stories fall in, partly by throwing out the entire litrpg screen aspect for dungeon management thats commonly used in many dungeon stories, the dungeon just progresses, theres no numbers or whatsoever to indicate progression, goals, in my opinion this story is for the better without those elements being thrown in your face the entire time.

Usually side characters are a major weakpoint with dungeon stories, as it is fairly easy for them to be unimportant to the story and become a drag on it that can make their PoV's tiresome to read, not with this one though, the frequent interactions of the dungeon with its inhabitatants and outsiders is a major point in this story, and one of its strengths as that allows for the side characters to be actually developed and for them to be recognisable as different characters and not 'generic adventurer NPC 1, 2' or the likes, the MC on the other hand is well not special beyond being a reincarnee that ended up as a dungeon core but that aint a problem for me as im interested in the side characters anyways.

Had no problems whatsoever with the grammar of this story, was an easy smooth read without any grammatical errors.

While i have my doubts about this story remaining this good in the long term and not fall to the same problem that plagues many dungeon stories, i have trust in the author that they can write it well as they have done so far and thus keep the story interesting and fun to read.

So would absolutely recommend for anyone that is looking for a dungeon story, its worth the time to try and read something different with this well done slice of life dungeon story.

While there are several dungeon stories around, and I personally love them all, some could say that they are the same. While true they can have many similarities each brings its own 'flavor' to the table.

For Dungeon Life, it brings a more jovial approach to the genre. Interactions between characters are strung together to form a nicely built web that keeps the story together all with a nice dash comedic antics to make you chuckle starting from the beginning.

The characters are diverse and varied throughout the story without being overloaded with numerous names put forth. Many of the main cast are mentioned and are easily attributed to their names, or when you forget like I did by using the method of matching names to characters. The side cast is not overly  extensive at time of reading so it is easier to identify the characters, the characters are introduced are memorable in their own way and are less likely to be forgotten. And if you can't remember a certain inspectors name, just follow the existing nickname in the story of "Elf Guy".

The beginning of any similar story can seem sluggish in advancing because of narrative set up, which this does have, it still paces forward well and does not detract from the overall experience. Even better that some of the small interactions between characters  from the beginning still are incorporated later in the story. World building.

Well I binged this in a very tired state in the early morning, but as a fan of the genre I'd give a solid 4 of 5 Star rating overall for a newer novel in a saturated dungeon/isekai market.

Reviewed at: Chapter Sixty-One: An Interest in Outside

This thing is honestly adorable.  I don't know a better word for it.  It is warm and fluffy and just feels good.  It has a nice, healthy dollop of D'aw.

It's also a well-written Dungeon Core story in other ways.  It has interesting characeters and some interestign worldbuilding, and the various characters act in ways that make sense, and the progression aspects are satisfying, but the warm and fuzzy feelign are the thign I keep coming back to.

I heavily enjoyed this story since discovering it and once I had found it and binged it until I caught up to now chapter 57. It has excellent humor and the mechanics seem very well made and held to as I've followed the story. I thank the author and look forward to reading more in the future.

I am having a blast.

It is a blast and a half so far, while not the height of artistry in literature or anything it is still very fun too read. What is also important to me is that it is not stres inducing and rather easy going.

Reviewed at: Chapter Sixty-One: An Interest in Outside

This is a cute story with interesting characters and a simple, but engaging plot. A fun, light hearted read that I very much enjoyed. The plot so far is low stakes but fun.
The world building is slow but the author jumps view points occasionally to help provide some context for the different situations that arise.
I recommend this title for anyone looking for a light hearted, humorous read.