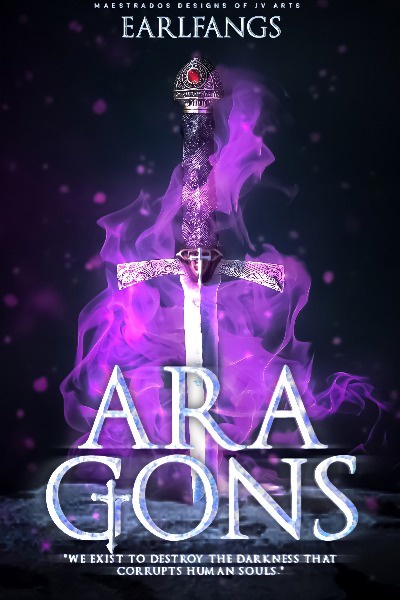 "Why are you glaring at me like that? Did I do anything to you?" Loki inquires, feigning disbelief. "I'm not sure why you're mad with me in the first place."

Raia's high arc brows draw together in a deep scowl, giving her an even grimmer and foreboding appearance. Eyes as merciless as a sharpened blade gaze at Loki. Of course, she has sensed something strange about him since he appeared in their train compartment. He has a strange aura around him.

After all, a friendly stranger is a man who cannot be trusted.

Loki looks her in the eyes, then his mouth forms an enigmatic smile.

"Raia," Raiden mutters from behind her, a firm tone in his voice.

Raia's eyes are glued to Loki, and she has no intention of looking away. Because doing so is equivalent to lowering her guard.

"What are you?" Raia growls, her hands and sword trembling.

Loki blinks, then curls his lips into a smile, revealing two sharp fangs. His silver eyes have lost their friendly glints.

"It's up to you to figure out," he replies, tightening the bandanna tie around his forehead.

Loki turns around and faces the crowd before the two can say anything. The people flinch when he smiles at them, so amiable yet menacing.

"You're free to go if you still want to see tomorrow," he says, stepping away from the doorway.

People scurry for the gaping exit, and Loki's eyes sparkle with amusement. Raia and Raiden remain vigilant, their gaze fixed on Loki.

Loki reaches out his hand and grabs the last person by the neck before she can step through the door.

"Everyone can leave this place alive except you," he whispers into the woman's ear.

The helpless victim stiffens as her eyes round in dread, the color draining from her face.

"Release her!" Raiden growls. He charges at him, his broadsword poised above his head.

Loki's lips form a cynical smile as he leaps up and lands on a table, one arm around the woman's waist. When she tries to wiggle free, he wraps his other arm around her and leans forward.

When Loki whispers something into her ear, the woman freezes, his arms tightening around her as if he's hugging her. He then lifts his head just enough to look at the two of them, a sinister smile on his face.

As they meet his gaze, Raia and Raiden tense up. His smile transforms into a grin, revealing long canine teeth as sharp as daggers, which he sinks into the flesh of the woman's neck.

"No!" Raiden screams in terror and rage as he lunges.

Loki kicks off the table, dodging the mad warrior and his thorny sword, while still sucking the woman's blood.

Raia appears from behind him, but Loki quickly alters his course without losing his cool, and her longsword slashes at empty air instead. She and Raiden pounce on him at the same time.

Loki continues to deflect their blows with ease, without even blinking an eye.

"Dammit!" Raiden hisses as he comes to a halt. He raises his sword and thrusts its blade into the ground. The floor vibrates beneath their feet, and huge green vines emerge from different spots, stretching like mad serpents toward the demon.

Raia lunges at the enemy.

Loki blinks, looking at the vines. He grins and raises his head, blood dripping from his mouth. He tosses the woman into the welcoming greenish limbs and wipes his mouth with delight. With an easy sweep of his hand, he slices the vines in his path and shifts his attention to the approaching Raia.

When the woman's body brushes past Raia, there's a strange sensation in her chest for a fluttering minute, as if it's been twisted. But then she ignores it, her face displaying no emotions and not even looking at the body.

"Damn you, vampire!" she snarls, approaching him with blazing eyes.

"Vampire?" Loki exclaims in disbelief, his face contorted as if offended. He's hopping backward while tilting his body sideways to avoid her sword strikes. "Don't put me in the likes of those disgusting creatures. I am a Blood Demon, not a vampire. But me drinking that human's blood . . . Please keep that a secret from my colleagues, okay?"

"N-no," Raiden's shaky voice interrupts Raia's train of thoughts. "No. It can't be."

Raia casts a backward glance at her companion. Understanding pours through her when she sees Raiden's pale face and widened eyes while looking at the woman laying on the vines.

The woman is as dead as the night in this town.

Raiden clenches his teeth, his golden eyes flashing with wrath, and takes his broadsword from the floor. He stands up and raises his head.

"Damn you!" he screams as he dashes towards Loki, swinging his sword recklessly. The Blood Demon dodges.

Loki's laughter echoes throughout the space, his silver cat-like eyes glinting with delight as he sweeps his glance over his opponent.

Raiden's sword flashes bright as it turns into a bladed whip. Then he charges at Loki, flailing his weapon again and again. His opponent, on the other hand, is clearly enjoying himself. With his hands in his pockets, Loki flawlessly dodges his attacks, not a single blow is landing on him.

Not again, Raia ponders as she watches her comrade. His emotion is blinding him, causing his attack to be as reckless as possible.

"Come forth, Raphael," she whispers.

A warm sensation transmits through her hands as her Blessing absorbs an amount of mana from her. The sword of her blade disappears as holy fire swallows its entire length, replacing the silver metal to act as the blade itself.

Raphael's true form, her Blessing, is entirely made of fire.

Loki's gaze shifts to her and his eyebrows shoot up in amusement. With a mischievous grin on his face, he kicks Raiden in the stomach. It's an effortless move, as though he lazily pushes him with one foot, but the outcome shows otherwise.

Raiden catches his breath in a startled gasp of pain as he flies backward and collides with the wall with a crashing thud.

Raia makes a determined face as she stares at Loki. He may be stronger, but she still has some tricks up her sleeve. And now is the perfect time to put it to use. However, it will cost her a lot of mana. With a roar, she holds her sword high over her head and slams it hard against the ground. A large crimson flame erupts from her weapon and plunges toward Loki like a sea wave.

When the waves of scorching heat reach the demon, Raia materializes in front of him as if she had traveled with the fire. But Loki doesn't seem surprised at all and simply swings his hand to Raia as if swatting an insect. His eyes light up with delight when Raia turns into orange smoke and drifts away.

"An afterimage?" Loki mutters with a trace of a smile as he leaps to avoid the flame wave. Then he spins and aims a kick at Raia, who approaches him from behind.

Raia bends backward with a gasp, and Loki's foot swishes past her nose— missing her by inches. She leaps at him and swings down her flame sword.

Loki grabs her wrist in mid-action, the flame blade flaring and crackling in front of his grinning face.

"You're trying to play tricks on me, woman?" Loki says in a low voice. "I'm afraid I'm not that easily fooled; to tell you the truth, I'm the smartest demon there is, and probably the smartest you'll ever meet."

He yanks her arm and hurls her towards the tables. Glasses shatter and red wine splashes everywhere. Raia winces as a shard of glass scratches her face.

Raiden is at her side in an instant, assisting her to her feet.

"Damn you, bloodsucker." Raia bares her teeth at the grinning Blood Demon, who is picking his ear and raising an eyebrow at them. She wipes the blood off her face with her hand, red liquid dripping down her hair. She scrunches her nose in annoyance upon smelling the aroma of wine wafting from her.

How's that possible? The Blood Demon doesn't even flinch. It's as if he foresaw the technique she'd employ and predicted it. Raia used her Blessing's flame to create an afterimage of herself to fool Loki's eyes and she sneaked behind him for a surprise attack. But she failed. Loki is far more sharp than she imagined.

Her hands tremble as she tightens her grip on her sword and clenches her other fist. Their opponent is undoubtedly stronger and more skilled. His flawless movements speak of expertise, and his strength and agility surpass all demons Raia has faced in the past. She can even compare him to Simon.

Loki is no ordinary demon. He's not someone to be underestimated.

Loki lets out a deep sigh and rummages inside his capelet before thrusting out his hand, holding something. It's a small oval-shaped mirror with a gleaming gold frame.

"Ta-da! Do you know what this is?" Loki asks in a friendly tone as if he's speaking to a comrade, but the questioned fellows remain unresponsive.

Loki scowls at their obstinate behavior. "You don't know what a mirror is?"

"Shut up!" Raia's deep voice echoes throughout the room, and she swings her sword horizontally without moving from her position. Flames shoot from her sword and toward the demon.

Loki grinned as he held up the mirror, and the fire smashes against it. It vanishes as if absorbed by the golden mirror, but the mirror remains intact.

Loki erupts in fits of laughter. His eyes turn to the woman's lifeless body before meeting the stares of his perplexed opponents. "Well, well, well. What is it that you are so upset about? It's just one person. After all, you can't save everyone. You even destroy some, don't you? You just destroyed one earlier."

His cat-like eyes gleam as they land on Raiden. The disciple has frozen at the demon's remarks.

"I destroyed her in order to save her!" Raiden's voice trembles, betraying his true feelings.

Loki sighs. "You did not save her, boy. Remember how she didn't want to vanish? She pleaded for her own life. But what did you do? You erased her existence. She will never be reborn."