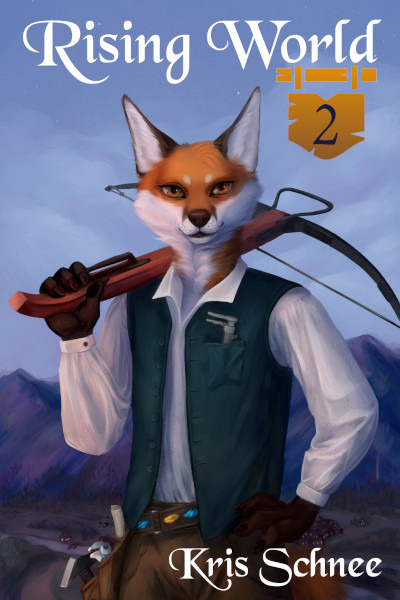 So Vonn trudged over to Polestar, who was taking a break from the construction too. The Centaur said, "A building day like this is time out of all the Farmers' harvest work."

"Not sure if you know this, but most of the settlements on the south bank aren't part of this town. Different Baron, who is..."

"The local Mussolini?" suggested Polestar, using a term nobody around would know.

Vonn looked around for eavesdroppers anyway. "Something like that." He explained the situation there, where the locals were basically forbidden to train in most of the possible classes. "Anyway we do have Farmers here too, but it's a smaller part of the town economy than handling the river trade."

"So, if I hang around here, what can I do? It looks like they don't just hand out farmland. I'm thrown off; I spent the last year-plus taking orders and I don't know how anything works."

"I still don't have a sense of your skills. The ones from before. You've been hiding your background, so what is it?"

Polestar shut his eyes and his ears flicked back. "Army. Logistics stuff. Before that, farm life. So I can fix a tractor, till a field even without my new built-in trailer. Raise a cute goat, years later kill that same goat and be gentle about it, play midwife to a cow, take orders, get a warehouse loaded and unloaded, and shoot a coyote at a hundred yards. Or a man, I think, not that I had to. Lately I've learned more about gathering plants for the docs and potion-makers."

"'Specialization is for insects', huh?" Vonn paced, thinking about Polestar's role. "I'm what you'd call a small business owner. Part owner. I'd like to get to the point where we need a warehouse manager, but we're already pushing it and our latest big project had a 'rapid unscheduled disassembly'. There's also the print shop nearby, if you can keep three kids from getting arrested for heresy."

"I looked in on that place. Seemed like those three know what they're doing already. Good to see that the printing press exists."

"Paper production is going to pick up, too. So... I haven't really got a job for you, but I can help out while you petition for a farm plot or something."

"Might be worth looking into. My plan was to just get out of lizard land and live, somewhere. I had no idea there was a goal."

Vonn shrugged. "I'm making my own."

Polestar pointed westward. "You have a haunted house zone just over the horizon. I'd be happy to leave it be, but I bet it'll get worse. If I do stay, that's got to be dealt with."

"It does bring down the real estate values. If you hang around, I'll let you know if we do anything adventurous with the dungeon."

"Fair, for now." Polestar offered his hand to shake.

Vonn did, though it wasn't a common gesture here. "Oh! While we have some privacy, what lives were you offered? I had seven choices. Selen had six, the same set minus mine. And you?"

The Centaur frowned, and then his eyes widened as he figured out the implication. "Let's see. Human peasant. Kobold miner. Centaur herbalist, obviously. And..."

Ashfall trotted over, bringing cold tea. "Hey! You two ready to help with the door?"

Vonn snorted. "One second, Ash. I'm not letting this question dangle." He turned to Polestar.

Vonn took a long drink from an offered cup. "Just speculating about a possible mutual friend. I'll head on back to the work site; take your time."

He walked off, distracted. Polestar had named the remaining roles Vonn and Selen had seen, except one. The Plucky Princess, described by the System as an Elf who'd fancied herself an acrobat and fallen to her death. Probably, then, she had mysteriously survived that fall and then become an eccentric, highly motivated young noble with bizarre otherworldly ideas. Not in this kingdom, where the royal family was Human.

It took a while to finish up his part in the construction, but it was interesting to watch. Several magic-users including Mom cooperated with a spell of earth and stone, aiding in a mixing process for something like mud or plaster with bits of leftover harvest straw mixed in. The goop got slathered between the new cabin's logs for insulation. Vonn couldn't master the spell but at least understood how it worked, speeding up the preparation and application of a pretty standard material. Cleaning the mud out of his fur gave Tazo some magic practice.

When his work was done, he wrote a letter to Selen. He used English as usual, their private code. Our new friend says he didn't see the option for Elf princess. You mentioned a rumor about one in the east, but now we have a lead! Which country? I'd suggest a long balloon flight, but we'd probably end up in Oz.

He added what little update there'd been on the dungeon situation, Polestar, and Vonn's training. Then he suggested, "I'll send a few copies of my game for you to resell. Maybe pass some along to any traders going east, to spread the word?" His machine-printed Swords and Spells game pointedly mentioned his location and a few "An Earthman wrote this!" hints. If somebody translated and bootlegged the thing in the eastern lands, that was fine.

Vonn added a question about concrete, then frowned and hesitated. There was more info to collect before sending the letter.

A note from Snow Quill

I'm not fully committed to the idea that the fourth (third) isekai person is the Elf princess. My second choice is probably the Human wizard. The person is probably not going to appear in this book, both due to being in another country (the candidates weren't all conveniently neighbors) and the need to not throw in yet more characters or another "hey look it's an Earthman" situation. Could be an end-of-book stinger when they make contact with him/her. Have one idea about that person's role. (Hint: what kind of person would want to be a princess specifically?) The story probably has to mention Selen gathering intel and saying "Yes, I confirmed that there's an Elf princess in Country X".