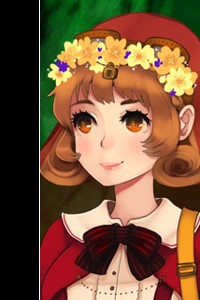 Dragging the carcass back was harder than Shreya thought it would be.

She had to burrow her knife through its muzzle, baring a hole for the stick she wedged into it. It went clean through. After testing its security, Shreya used the stick as her handle for pulling the bear along behind her.

By the time she got it into Marjani territory, her palms were pulsing. She brought them up to her face to check the damage. Her arms shook from the effort. The stick had rubbed the uppermost part of her palm raw, her skin a split pink color. She was too caught up in her hands to notice exactly when the hush fell over the nearby wolves.

She'd come in through the artisans' area, where people were working on their various crafts. Her presence paused them. The row of weaving women stared at her, their intricately patterned looms before them. Black diagonal lines intersected squares on white textiles. Pulled taut, the threads stretched from the loom posts to the backstraps the weavers wore, maintaining tension on the loom.

The doll makers that sat by them were transfixed on the bear, mouths as wide open as the toys in their grasps. Hands pulling strings through beads hovered in the air. The painter's brush froze mid-stroke. Someone crawled out from under the crafters' lean-to.

A pup squealed in delight. Her breaking the silence gave everyone else permission to. The weavers clacked their combs together. The doll makers shook jars of beads. Everyone cheered in celebration of the haul. For one brief moment, Shreya felt like a celebrity. A real hero.

They were going to eat well tonight.

Tadeas, the painter, and Maysa, one of the doll makers, came over to take the bear. Shreya gladly handed it over. The thought of dragging the bear anywhere else made her feel faint. Together, Tadeas and Maysa hoisted it up and carried it off towards the village storehouse. A weaver, Oydis, unhooked herself from her loom, and ran over to Shreya.

The rest of the artisans returned to their work with renewed vigor. They chatted animatedly about what the bear would taste like. Tough; fatty. Tender; sweet. A couple of them hadn't ever had one before, too young to know. That sparked up a debate among the older ones who insisted they were right, and that was enough for their attention to switch off from Shreya.

Oydis hugged her, her slight form feeling like bones more than anything. Shreya was careful not to accidentally crush her. "This is such a gift, Shreya. How did you find it?" Oydis held her at arms' length. "And are you alright? Are you hurt in any way?"

"I'm alright." Shreya said, glad to not have to speak in Casternian anymore. Her mother language felt like home to her. "The bear was on its way to death when I got to it. I only put it out of its misery."

"It's been so long since I've seen one."

The hunters weren't having much luck. Game was scarce in their territory. Animals weren't repopulating the area fast enough. For fear of overhunting, the Marjani people had to diversify their food sources. They grew a limited number of crops. Poor soil conditions prevented them from expanding their fields.

In the distance, a thick, billowing tower of smoke scraped the sky. A mourning fire. Shreya's stomach dropped. Mourning fires were growing more frequently as of late.

Oydis followed her gaze. "It's Galo and Kachina. Kachina gave birth this morning."

"I'll pay my respects when their mourning period ends." She wondered if the fire indicated that their children failed to survive, or if they had to make a hard decision. Faced with the current Marjani reality, those kinds of decisions weren't uncommon. Keeping one or two mouths well-fed was a more attainable prospect than multiples. It put less of a strain on the overall community. Pragmatism didn't make it any easier of a decision, though.

"Thank you. I'm sure they'll appreciate it."

Shreya took her hat off, freeing her ears to the air. She tied the strings around her neck so she wouldn't lose it. It hung loosely against her back as she walked through the village. As customary, she exchanged warm greetings with every wolf she passed along the way.

The afternoon hour meant that everyone was scrambling to finish their daily tasks. A wolf leaned over a stump, carving a figurine under her mentor's watchful gaze. A second pair were sharpening their knives, the clacks and streaks of metal-on-metal filling the air. They were having a good laugh at another wolf's struggles to get a fire pit going. The spark refused to happen.

Satchel-carriers headed for the storehouse, their bags full of leafy greans they'd gathered. Barrels of grain balanced on shoulders going the same way. Hefty weights. A small family followed the procession, both fathers proud of the haul. One of their two puppies held a writhing sack. Shreya's nose told her that there were fish inside, nice ones, too. The other one called out to Shreya, complimenting her deer cape.

In another area, tanning took place. Wapasha, an older wolf, brushed dirt from the raw hide. He had it stretched between posts. Cured with a thin salt layer, lean meat jerky dried in the waning sun. The strips were suspended, looped and tied to hang off of tree branches. Wapasha dabbed at his forehead with a balled-up piece of cloth.

"Would you like some help?" Shreya walked closer. The other tanners were running wire brushes over their hide skins to soften them. They worked in a vocation that required patience and an eye for detail.

"Thank you for the offer, but I'm fine. I just had a little too much sun today." Wapasha blew his black-and-gray fringe out of his eyes. His hair was longer than hers. "Did something happen to you? A little roughhousing gone awry?"

She realized he was talking about the blood streak on her pants, from when she wiped her knife off. "I was out hunting."

Wapasha grinned. Smile lines crinkled his eyes. "Jumped right into the fray, did you? I did a lot of that when I was your age. Sometimes I miss it, but then I remember that my Elder years are around the corner. I look forward to moving into a resting home more than anything else. Hope I'll age up wise."

"You're wise. You just have to wait for your age to catch up," Shreya assured him. Well-built with a towering figure, Wapasha was only intimidating when it came to his looks. He hadn't lost any of his muscle mass from when he used to hunt with Shreya's mother and the rest of the hunters.

"You don't need to flatter me, Shreya," he said. "What I need from you is for you to talk to Shanti for me. She needs to return The Shaded Grove to the library. It's the final book in the Bzherkan trilogy. Have you read any of them?"

"It sounds familiar. Who's the writer?"

"Ward Marjani Fielaan. The Bzherkan trilogy is a masterpiece." Wapasha closed his eyes as he spoke, as if he were picturing the pages. "It's a romantic political drama with nods to classic literature. Love blooms in a war cabinet."

What was Shanti doing with a book like that? Shanti preferred reading what Shreya liked to call liars' books, rewritten tales of greatness, of wolves besting humanity. They were page-turners starring genius action hero protagonists. They were smart, strong, and hot to everyone but themselves. That last point was supposed to be their one fatal flaw. Terrible modesty. Those books were absurdly popular with wolves their age—the more "wolves, hell yeah" moments in the book, the better.

"I'll be sure to tell her." There had to be a good reason why she checked The Shaded Grove out. "I'll leave you to your tanning. Take care, Wapasha."

Wapasha gave her a nod. "You as well."

She left him. She passed by more people packing up their things. The nightly gathering would be happening soon. It was a traditional time for Marjani wolves to join together to eat, talk, and discuss what was going on in their lives if they wished to. Sometimes there were even performances...music, storytelling, dance, and so-on-and-so-forth. The most important part of the gathering was the Elders' announcements.

The black mourning cloud made a somber mood hang in the air. Shreya wasn't sure what the gathering would be like tonight because of it.

Chapter 17's vote will be active until Monday at 11:59 PM EST. Want to get involved with the story? Vote on the latest poll and leave comments on the main site!