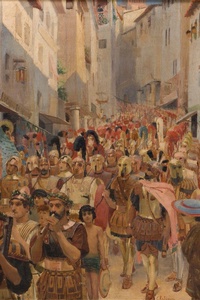 Danel is drowning. He had fallen out of the trireme into the ocean during the worst storm he had ever seen.

It is peaceful, he thought. Looking up to surface he say the ship rocking like a child's toy, rain poured down while lightning crackled across the sky. It just felt easier to let the cold water take him than to swim towards the turmoil on the surface.

As he closes his eyes he hears a female voice say "This will not do at all."

Danel's eyes shoot open, he begins to thrash in the water and the water is no longer peaceful. His lungs burn desperate for air but no air reaches him as he sucks in saltwater.

"Be calm." the voice says again, and he is. The water is welcoming once again.

"Tell me little one, do you want to live?" the beautiful voice vibrates through him, each word a caress to his weary body. By instinct he try's to speak but only water enters his lungs.

"Do not speak it. Think it." by all the gods he would pay all the gold in the world to hear her speak.

Danel thinks "Who are you?"

"I am known by many names but your people call me Tanit, goddess of fertility."

Danel is shocked. Baal and Tanit are the patron gods of the Carthaginian Empire, the most common symbol of Carthage is the symbol of Tanit. The old stories are rich with encounters of mortals and gods but he had never imagined he would be so lucky. Or unlucky, the gods are capricious, while some stories end well for the mortals many more end in horribly.

"Hail Tanit. Mother of Carthage. Goddess of the moon and the fields. What can this mortal do for one such as you." Danel laid it on thick, disrespect to the gods is worse than suicidal, at least with suicide it will be quick.

"You can answer my question. Do you want to live?"

"And what," the next words came like a pur coming from a lion," will you give?"

"...Anything." Danel could feel the goddess waiting for more, he knew what she wanted, "Everything."

He could feel her pleasure at those words.

"Will you fight for me?" she purred.

"Will you kill for me?" she roared.

"Will you die for me?" she roared.

"WILL YOU BE MY INSTRUMENT FOREVERMORE!"

And she appeared before me, a woman so maddeningly beautiful men would kill for the barest acknowledgment. She shimmered with moonlight and wore a silver crown, her voluptuous body wrapped in the finest of threads that barely covered her. Her hands reach forward and cup his face. her face so close to him he can almost taste her.

"You are mine." she says and he knows that those words are the sweetest sounds he will ever hear in his life.

She kisses him then, his body is filled with more pleasure than he knew was possible. His lungs fill with air, his limbs with strength, he feels like he could lift mountains at that moment.

She breaks off the kiss, he never wanted it to end. "Now swim for your life." and she disappeared as quickly as she came.

Danel looks toward the surface and swims, his limbs working harder and faster than they ever have or ever will. Even as he reaches the surface the strength from the goddess begins to fade. The burning in his lungs from lack of air is returned. A few more moments, thats all he prays for.

He breaks the surface and gasps. The air feels like medicine for his aching lungs. He swims toward the trireme that he had fallen from only a few short minutes ago. The storm winds and rain keep the ship from moving far but moving through the water is twice as hard. Maybe some residual strength remains because Danel successfully reaches the side of the ship and screams "HELP!" He shouts over and over again but the storm winds steal his voice but he is lucky that one sailor notices him and then shouts for rope. A line is lowered and Danel grabs it with his fading strength, the goddesses power has left him and now it is only his own strength left and he is a half drowned man, not much strength is left. The sailors grab him and haul him onboard.

One man shouts "By all the gods how did you survive?"

"He had help." a deep male voice says.

With what fading energy Danel has he turns towards the voice and he sees a man that he knows is not mortal. The man is very tall with golden hair, deep green eyes and pale skin. He wears a pure white tunic and blue pants but what is truly odd is that during this storm will waves crash on deck and rain comes in sheets this man is completely dry. 'Who?' he thinks.

The tall man smiles at him "Hello Danel, my name is George, I'm your guardian angel. I think we are going to have a lot of fun together."

When he finishes talking Danel feels the exhaustion overcome him.

"Rest now young one. We have so much work to do."