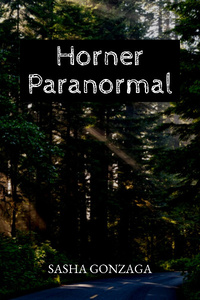 They didn’t say a word to one another until they were safely inside the van again, the doors shut firmly to keep any nosy townsfolk from overhearing. Danny had barely even opened his mouth before Margot blurted out what she’d been dying to say since meeting Mr. Farmer’s eyes.

“I don’t like this,” she said, gripping the steering wheel tight. “I couldn’t feel anything from them. No emotions, no intent, nothing.”

Danny turned and raised an eyebrow at that. “Nothing?”

“Yeah. Nothing. Except when…” She gritted her teeth, staring at her white knuckles on the wheel in front of her. “I felt something when I caught Mr. Farmer’s eye, but it definitely wasn’t good. I really don’t like this.”

Danny nodded, his mouth quirking to the side as he mulled this over. “Jake?” he asked.

Margot looked into the rearview mirror to see Jake waving his notebook in the dinette seat behind her. “I mean, their story checks out,” he said, “details are roughly the same, or at least as the same as they can be with any sort of witness testimony, they have basically all the signs of some sort of malevolent spirit being in the house if, you know, they’re telling the truth, and they are still willing to pay us, which is definitely a positive, but–”

“Something else is going on,” Danny finished, and Jake nodded.

Danny sighed and took off the green tartan trapper hat he always wore, pinching the bridge of his nose in annoyance. “Great,” he said. “The first solid chance of money we’ve had in a month, and something’s up with the clients. Of course.”

Margot had to agree. She and Danny had been doing this gig since she graduated from college a little over a year ago, and, well… The paranormal was everyday stuff for them. Hell, they were paranormal, technically speaking. But most people had no idea magic and werewolves and all that stuff even existed, thanks to the Veil. And even without the mysteriously persistent psychic energy keeping almost everyone in the dark about the existence of supernatural forces, it’s not like paranormal folk were itching to expose their existence. Any jobs the Horners got were usually from lying attention seekers, occult hobbyists, or scared mundies with nowhere else to turn. They did this job because they wanted to help people with their powers, but at this point, all they really cared about was getting paid, staying out of jail, and not dying on a case.

“What about that witch they were talking about?” Jake asked. “Do you think she might be involved in some way? Like she cursed them or something? Or do you think that’s what they want us to think so we get confused?”

Danny’s face darkened as he stared out the windshield, and Margot winced and turned to face Jake behind her. “Could go either way,” Margot said. “Personally, I think they’re just blowing smoke–”

“We should check her out,” Danny said, still glaring straight ahead. “Just to be sure.”

Margot and Jake shared a glance, Jake’s face questioning, his emotions confused. Right. They hadn’t filled him in on Danny’s history with witches yet. Probably something they should do soon. Preferably now.

“You two swing by the town hall, see what sort of records they have on the house,” he said, not even listening. His mind was a million miles away, his eyes distant. “I’m gonna ask around about this witch.”

“Danny, wait–” Margot began, but he opened the van door and slipped outside before she could finish, shutting it behind him without even a glance. She sighed indignantly as he walked away down the sidewalk.

Jake gave her a confused look in the rearview mirror. “About what? What’s he so upset about?”

“Well, I was going to ask him to share that with you, but now that he’s being all angsty, I guess I will. Try not to let him kill me later.”

“Like beating you in a fight is even possible for either of us.”

“Well, thank you, that’s a much better compliment than your last one.”

“You might want to come up front,” she said, and Jake’s eyebrows raised, but he climbed into the front seat, a skill all three of them had mastered after so long on the road. Once he was seated, she continued: “Look, this is kind of heavy, um… Danny used to have an older sister.”

Jake watched her, his brown eyes soft behind his rectangular glasses. “Used to,” he said.

“Yeah.” Margot huffed out some air and continued to stare out the windshield, never the best at eye contact in these sorts of situations. Jake would understand. “He, uh, when he was seventeen, he brought her on a case, and um. She was killed. By a coven of witches.”

Jake blinked, his eyes flitting to the side as the cogs in his mind turned. “So… I’m guessing Danny isn’t the best at dealing with witches?”

“Yeah.” Margot took a breath, trying to calm her heart. “Something like that.” God, she hoped Danny wouldn’t blow a gasket when he learned about this conversation. That was the last thing they needed.

Margot clenched her jaw and glanced out the window towards the direction Danny had gone, but she couldn’t see him anymore. He must’ve turned a corner. “He’s not stupid enough to take on a witch by himself. Especially without any weapons.” She jerked her head towards the back, where Danny’s various weapons (three baseball bats, a large knife, and a hunting rifle) were still tucked away. “And, uh, I don’t know about you, but I don’t particularly want him to catch us following him right now.”

Jake watched her for a long moment. “He’s not gonna hurt you, Margot,” he said.

“I know!” It came out snappy, and she immediately winced at the sound of her own voice. “I know. Sorry. I just…” Margot let out a shaky sigh, refusing to look at Jake so she wouldn’t have to see the sympathetic pity on his face. No, she just felt it and knew for certain it was there. That was all. Real great gig, having psychic powers.

“Let’s just go to the town hall,” she said, turning the key in the ignition to start the van. It rumbled to life, the sound as comforting to her ears as a cat’s purr. “You up for some research, beanpole?”

Jake blinked, but then he forced a small grin and nodded; Margot didn’t feel his concern for her go away, but he’d at least caught on that she didn’t want to talk about it. Good.

“Oh, you know me,” he said, buckling his seatbelt. “Always looking for a chance to remind myself my seven years in academia weren’t a waste of time.”

Margot snorted and pulled the van out of the parking space. “At least you didn’t go to an Ivy League.”

“You know, that’s fair. What must your alma mater think of you now, driving a beat-up van around the country solving mysteries about things most people don’t even think exist?”

Margot grinned despite herself and punched him lightly on the arm, keeping her eyes on the road and one hand on the steering wheel. Jake laughed, the sound spreading warmth through her chest; despite everything, he always knew how to make her smile.

Hey guys! Just wanted to let you know that the next chapter release won't be until Friday of next week, and after that, I'll be publishing this stuff weekly at ~6pm on Fridays. Hope you're enjoying it so far! Next chapter will be from Danny's perspective... >:)