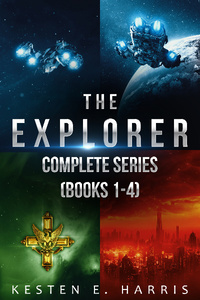 The Explorer Saga is also available on Amazon.

A race of violent aliens known as the Aggressive Intellectuals have been at war with humanity for over 400 years, but Wander Locke's never given the conflict much thought. Not until it claimed his parents. His sister's body was never recovered, leaving him to believe that she's still out there somewhere.

He's made it his personal mission to find her and bring her home. A mission supported by the President of the First Division, who tasks him with retrieving an experimental shield generator from a mysterious group of rebels.

What was meant to be a simple task evolves into a life-changing fight as Wander discovers that the galaxy has as many secrets as it does stars. He's not just searching for his sister anymore, he's looking for answers about his family, his enemies, and himself.

Alright, let's start at the beginning. It may not be my main choice of books, but I do like a good sci-fi story once in a while. And let's face it, there are not that many sci-fi titles here on RR that exceed the usual 6 chapters before the author is never heard of ever again (they probably transmigrate to lands of magic and dragons, if other books are to be believed, but I'm getting side-tracked here...).

So when I stumbled upon this Explorer Saga, I was intrigued: 78 chapters when I'm writing this review, that is starting to look like a proper read, something worthy to try. Though I must admit it took me a while to get past those "Agressive Intellectuals" from the synopsis. The childishness of that name made me suspect a childish writing overall.

Plus there was no review, a bit of an unusual occurence for a story this long, but not unheard of.

However, as I said, not that many sci-fi titles out here so after some time, I braced myself and decided to give it a try. And to my surprise... the writing was actually much better than I expected. It's not the best-written novel on this site, but it's good, solid, with a touch of well dosed humor here and there. The author knows how to write and it shows. I didn't notice any major typo, the pace is consistent and I for one happen to like stories written in the first person. So more promising than I thought, I was starting to really look forward to the story at this point.

The first few chapters are fine. The characters appear quite complex, even too complex perhaps: Wander seems to be a total mess under his nonchalent facade, but given he has some trauma, I'm fine with it. I am tired of those perfect MC who never make any mistake or miscalculation anyways, I'd much rather have this mess of a MC. There are some obvious hints that the author is trying hard to make his work unlike other sci-fi. I am not a fan of those tehnologies which create something from nothing (spatial ring are good in a fantasy stories, but phones that can materialize keys or other objects ? Not so much), and I am definitely NOT a fan of that stupid "Agressive Intellectuals" moniker whose only goal is obviously "You see ? AI ! Because they're robots ! And yet, not THE AI 'cause my work is unique !), but they are minor problems, not to mention very subjective.

No, it's only after those first chapters that the real problem arises. The story. There are MAJOR plot-holes, some things just don't make any sense. I can ignore a bit of nonsense, but too much of it unfortunately becomes a no-go for me. I will list a few below, but keep in mind I only read book 1 (+ 1st chapter of book 2). Be warned, the following examples are spoilers.

Spoiler :
If the barrier mission is of such utmost importance to Frost, why does she only send a crew of 2 inexperienced teenagers after it ? If Wander has indeed the potential to become her strongest weapon, why does she send him, untrained as he is and even ignorant of his own abilities, to her biggest detractor, knowing there is a good chance he'll just kidnap the boy and try to turn him. If the AI knight was indeed watching him that first night in his cruiser, then why does he/she not kidnap him then. I mean the guy is actually sleeping alone in an open roofless car. Why do you wait for him to be awake and accompanied ? And those are just examples

Now as I said I stopped at the end of book 1, so there might be valid explanations for some of these points, in which case I would gladly edit this review, but as it is...

So if you're not too bothered by the MC being put in the center of major events at the cost of absurd leadership decisions just for the sake of making him shine, that story is worth a shot. Otherwise I suggest you keep walking.