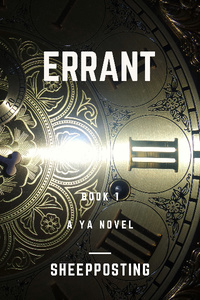 Amateur fighter Kestril only remembers two things about her mother's disappearance:  a locket and the promise she made to keep her brother safe. That promise is all she thinks of when she jumps in front of a car to save her brother. She expects death, but instead wakes up to a looming clock tower, cobblestone streets, and dead  soldiers wearing lockets just like her mother's. Kess's locket marks her as one of the Errant- people with control over dimensions and time, and the same people rumored to have captured her brother across the city. When a military group mistakes Kess for their enemy, she swears allegiance at gunpoint, hoping to search for her brother from within. Inside, Kess finds an even darker side of the city bent on killing the Errant-using any means necessary. When the murder of an important Errant soldier throws the city further into civil war, Kess uncovers a plot that could undo everything she's fought for so far. The only problem? Her brother is at the head of it. Trapped between her promise to her mother and her morals, Kess finds little use for her theatrical brawling of the past. She can only hope to find her brother before it's too late.

|| Update: 4/24/2022 Have decided to rewrite this novel, but will continue to post chapters of this draft, possibly with commentary. Questions, comments, concerns, and suggestions are welcome. Thanks for supporting me! ||
|| Story is finished, just getting into a publishing schedule on Royal Road for the first time. ||

I braced myself a little, going in, because the first couple of sentences strike me as a bit too … stylized? Or maybe self-conscious; trying too hard to be grabby.

But they're quick and easy to get past, and once the author gets going, the language smooths out nicely A fighter paid to take a dive is not new ground, but it's always interesting. That it's a young woman makes it moreso. The drive to make money, to take care of someone--a brother, in this case--is absolutely identifiable, and makes Kess completely sympathetic.

The fact that 'there are people more powerful than' Mattes is good. Makes clear that Kess isn't just a -little- over her head, here.

Oliver is an annoying ingrate! But a kid, so that's okay. And he's just trying to take care, too, which is strong. Both of them only want what's best. (Kess is right, though.) The first scene with them might go on for a beat or two too long … but it's well-drawn. Good conflict, about important issues--and Oliver is no fool. He knows how to make a threat. That's great. He's not just whining.

The beat where his voice is gentle is a strong way to end the first chapter.

This is well-drawn. The language is clear and the rhythm unobtrusive, but the character is what really propels it. I guess it's a portal fantasy, but honestly the first chapter (okay, first two chapters, I peeked) are so good at grounding the reader in Kess's life, in her problems, that I'm not sure I WANT to go into a fantasy world as opposed to seeing her fight her battles here. Usually, if I read something like this, the 'our world' stuff is just a shallow placeholder, to give the character a sorta veneer of 'backstory' in the fantasy world.