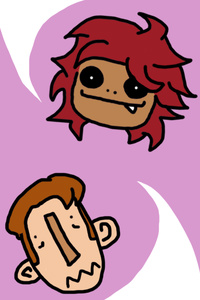 Chapter VII: The Swords of the Sea

The cutlass hovered in the air, cold blue steel illuminated by unknown light. Sharp, even from a distance, even after centuries lying in wait- a burnished-silver crossguard, a brilliant azurite gem functioning as the pommel of the blade. It spun, lazy in the air, the flat of the blade reflecting light, bright enough to blind Rum as he entered the circular room.

Rum was struck speechless. He'd only dabbled with swords- they were yet another aspect of being a warrior-poet that he, frankly, was terrible at. He'd always hoped that if he got into a fight, he'd be able to pay someone to be his bodyguard- or at the very least, his body-double. But now standing in the chamber, starring at the spinning sword, Rum was overwhelmed with an urge to grab it, to swing with reckless abandon.

If it truly was the sword that made the man... this one would make him a great one.

Despite the beautiful blade before him, Rum had the distant awareness that the last few events in his life were horribly, terribly wrong. Stumble upon an ancient temple, with evidence of a brutal massacre? Why yes, I'll go and take hold of the first strange glowing object I'll find, thank you very much. How many stories had started like that, ending with someone looking like a plate of spaghetti?

His brain jumped to the golden bones in the temple atrium, thrown wildly across the room, blasted and fused to the walls by some horrific magic beyond his comprehension. Had the intruder, the one who'd ransacked the temple all those years ago, been after this sword? Why hadn't they found it?

Caution, who needs caution!? I took to the sea to get away from caution!

He took another step into the room, eyes never leaving the spinning sword. By the time he was halfway across the room, hand outstretched, all the warnings and cautions were fleeing out the back of his mind. Rum reached out and snatched the sword, fingers easily entwining around the grip.

He grinned, looking at his own reflection in the blade- and suddenly paled.

Why exactly did I do that?

He hadn't the faintest clue. It was the exact opposite of the person he'd always been. A shiver went down his spine, and a cold sweat clung to his forehead.

"Uhm, Molotov?" Rum yelled out. "Could you uhm, come in here?! I feel like I need to mentally unpack some things!"

There was no answer. Rum turned- to see a figure blocking the entryway. There were many notable things about this figure. But the most important thing, the thing that Rum focused upon, was its feet.

The figure was hovering, several inches off the ground.

Rum gaped and immediately began backpedaling farther into the room- but there was no escape, no other doors. The figure, wearing draping ice-blue robes, seemed to hover and shift its transparency in time with the hum of the sword. Thin arms extended outward from the sleeves, veins bulging like snakes and running along down into thin hands. The ghost- because what else could it be- had ashen brown skin, a singular eye blinded, white hair thin and retreating on its head.

The sword wobbled, and Rum suddenly became aware he was gripping it with both his hands, holding it out before him as if it could stop his approaching death. The ghost hovered, slowly moving closer, seemingly unaware of the blade Rum had leveled to its chest.

There was no immediate answer. The ghastly apparition steadily advanced across the room.

I knew it! I called it, I absolutely called something like this happening! Cursed sword, cursed temple, stupid, stupid way to die!

Rum was shaking, teeth chattering, the blue cutlass jittering in his hands. The greasy stench of magic, horrible in his nose, was filling the chamber. His heart was pounding, his eyes wide- the ghost came closer, closer-

It opened its mouth, raspy voice filling the small chamber. "How-"

Rum screamed and wildly swung the sword. The ghost pulled back and unbelievably, against all odds and understanding, Rum realized he was running forward, bringing his sword up and thrusting it forward toward the center of the creature. It raised up its hands, as if attempting to ward off the blow- but the sword cleaved through, burying itself deep into the ghost's chest, then ripping clean through the back.

White-blue wisps of raw magic spilled out of the back of the creature and Rum let go of the blade, dancing backwards and squeaking out a scream. The ghost twisted, dead hands going to the blade.

Rum fell backward onto his butt, eyes blinking wildly. This turn of events was somewhat unexpected.

"You didn't think stabbing someone in the chest with a cutlass would work? Are you stupid?"

"Not stupid exactly- I just- well," Rum began to vaguely gesture to the spectre floating in front of him. "Well you're clearly a ghost! I thought you were approaching me, coming to steal my soul in revenge for touching your cursed blade! That's usually how the stories go, right?"

The ghost gave an exasperated sigh of pain. "Did it ever occur to you that hey, that ghost might be coming over to give me some words of warning about the magical floating sword? Make an explanation of what it is, what happened in this temple so many eons ago?"

"To be honest, I was pretty dead-set on the soul-stealing idea," Rum said. He brushed his butt off, making his way back to his feet. "I really must apologize."

The ghost made a face. "Stab first, apologize after. Gods, you fleshies on the mortal plane. Always so hasty, always assuming things! I had a speech prepared, you twit!"

Rum had the vague sensation he should be offended by the term "fleshies"- but considering his sword was still sticking out of the back of the ghost, he decided to table his offensive for later. He quirked his head to the side, pointing toward the wound.

"Oh I'm not telling you JACK, after this," the ghost snarled. It eased itself up to its full height, grabbed the sword by the hilt, and slowly pulled it back out. A horrible sucking noise accompanied it, ectoplasm splattering on the marble floors. The ghost tossed the blue-steel cutlass on the ground, and it fell with a clatter that filled the room. Then, with all the ghostly grandeur it could still muster, it made a rude gesture at Rum. Rum, reflexively, gasped.

"Enjoy figuring out your cursed sword all on your own," said the ghost. "Frickin' idiot."

Then, it promptly vanished.

Rum wasn't sure what to say. The magical glow which had entranced him and led him toward the chamber was gone- but the sword remained, laying on the floor, as if it were innocent in all of what had transpired.

"Wait. Cursed? You said cursed, right?" Rum asked the air. There was no response.

Maybe... maybe it's not a bad curse. Maybe the curse is the sword makes you brush your teeth after every meal? Or makes you lactose intolerant? That IS a curse, in a way. And besides, it's not like I HAVE to take the sword. I can absolutely not pick up the sword. Just because I touched it once, it doesn't make it MY sword, I don't have to have anything to do with it. Yes, I'll just not touch the sword. That'll be the end of it, I'll find Molotov, he'll teleport us up and out of here, and we'll go back to the ship and not think about this ever again. Simple.

Rum nodded decisively. He picked up his sword, stuck it through his belt, and left the chamber. He was halfway up the stairs before he realized what he'd done.

Annay hocked a gob of spit into the bath-water. Steam filled her cabin, the hot water easing the ache in her strained muscles. At the moment, she reflected, life was good.

The gemstone key caught the light and flickered as she held it up in her palm. Such a tiny thing, precious blue sea-stone barely the length of her pinky finger- but the Shark Tribes of the Jerr Sea had fought tooth and fin to keep it from her. If it hadn't been for that wet-soap of a poet and his man-servant providing a momentary distraction, she doubted she'd have been able to clear the way to the island.

Annay sighed, content. She loved to steal things. Really, absolutely, positively, with every fibre in her fish-blooded being, LOVED to steal things. It was about the only thing that made her want to make up in the morning to greet the sun- the idea of one day flying something big enough up there to steal it.

She wondered idly if the poet and his pet wizard were still stuck on the beach, or if the rest of the sharks had finally caught up with them. She pictured the poet, Rummy or whatever it had been, flailing his arms wildly as he was chomped to bits.

She supposed he deserved it, the way he had kept trying to awkwardly flirt with her. But in the same breath she couldn't exactly hold it against him- he'd bought her sob story about being an innocent young mermaid pursued by a killer shark instantly, hook, line and sinker. He was just a good-natured, awkward, cowardly little boy- and she was notoriously beautiful, and beautifully notorious, after all.

And I suppose I should give them some credit for that fish-bowl helmet idea... 'twould be useful to try that enchantment again, next time I'm up on deck.

There came a loud knock at the door. "We'll be descendin' in ten minutes, Captain," called the gruff voice from outside. From above Annay already heard shouts, her loyal crew of killers and psychopaths hoisting the mains and sharpening daggers, ready for whatever danger lay in wait ahead.

Captain Annay smiled, flipping the key idly between her fingers. She lounged back down in the water, her gaze flickering toward her cutlass, situated beside the bath. Her tail flicked, spilling water across the room. She couldn't help being excited- after years of searching, she was nearly there.

The ancient temple of the Gold-Boned Cyclopites, buried and lost for ages on an unmarked island. Holding a relic so powerful even those fools in the Yellow Haven Empire would have to snivel and bow before me. A sword to cut, a sword to kill- a sword that'll get me exactly what I want, what I deserve.

One of the fabled Swords of the Sea... Foam-Cutter. You'll be mine, even if I have to kill half the world to get you...