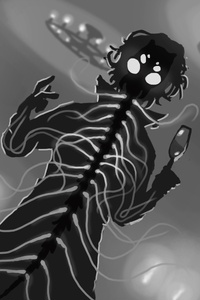 Shadow of the Spyre

Saebrya was gutting a bucketful of trout outside the riverside cottage that she and Ryan had built for her sixteenth birthday when she felt the world shift. It was as if the very essence of the land around her suddenly tilted and pulled to the north, flooding past her in a vast rainbow wave, rolling sippers along with it. Saebrya stumbled and dropped her knife against the current, which was especially powerful with Ryan making almost daily visits to her home, soaking the ground, plants, and floorboards with his silver essence. Her knife hit the ground as it normally would, totally unaffected by the strange pull. Saebrya, however, felt it in every part of her body, like ethereal hands were shoving her towards the north, buffeting her, making her fight just to stay upright. 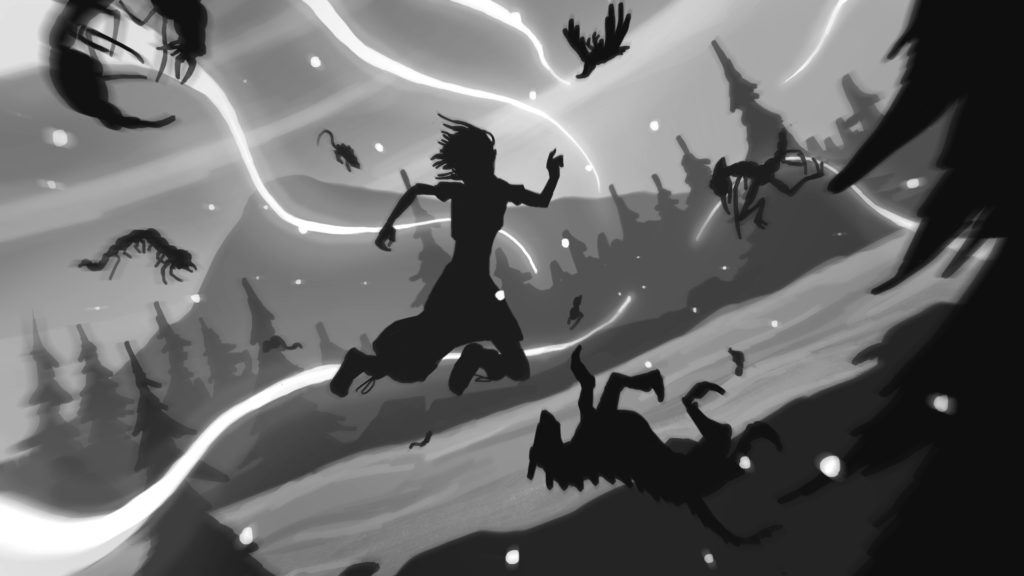 Then the current passing around her grew suddenly stronger, the sipper liquid speeding up, as if the world were a barrel of water and someone had begun pouring it out. The violence knocked her off the bank and into the river as sippers of all sizes were swept past her, pummeling into her like sharp, angry rocks. Unlike Saebrya, the cold glacial water didn’t affect the sippers, and they continued on through the river and over the opposite bank, and into the utterly still and calm forest beyond, tumbling north like flailing, wriggling debris in an ethereal hurricane.

Saebrya had grabbed a fallen underwater log and was just starting to regain her footing on the sand below when the unyielding rush to the north suddenly increased tenfold, like someone had just kicked the barrel of the world completely over, and the force shoved her out into the deeper parts of the river, painfully battering her with sippers of all shapes and sizes, many of whose razor spines cut, stabbed, or scraped her as they were swept by.

Almost a decade ago, Ryan’s mother had tried to insist Saebrya stay with them at the inn, and as much as Saebrya had wanted a home and a family, she had refused due to the profusion of sippers that always congregated around Ryan’s home. That refusal was probably the only thing that saved Saebrya now. Even the little pools of silver ether that Ryan had left behind on his last visit had been whipped into a painful, stinging froth, the spray knocking her down when she tried to get up, peppering her with pinpricks that cut and punctured her skin in their ferocity.

As Saebrya struggled, rolled by both the river and the ether swirling around her, she felt her own warm blood swirling through the water with her and lost all sense of direction.

Just like the sippers, Saebrya thought, her lungs burning for air, no amount of struggles able to fight both currents at once. All around her, sippers were dying, pounded to nothingness on rocks, trees, and riverbed, yet the normal world went on completely oblivious to the chaos happening all around her. I’m going to die just like the sippers…

Just as Saebrya’s lungs had started to spasm, the pull to the north abruptly stopped, giving her the opportunity she needed to reorient herself and kick her way to the river’s surface. She broke free of the icy grip just as she started to choke, and she hung in the current, gasping and coughing, as the water of the Idorion carried her downstream to the south.

It was several minutes before she was able to swim all the way back to the river’s edge and drag herself out onto its sandy shore, soaked and shivering. From there, she stumbled back to the cottage and used her two spare shirts to bind the gashes in her arms, legs, and torso. Her whole body was peppered with wounds that looked almost like acne, but she did what she could with the larger scratches, wrapping herself until she looked like a street rat from the deserts of Etro. Her face had a new cut on her left cheekbone, where a sipper spine had come less than half an inch from puncturing her eye, and her forearm had a gash where something huge had rent it open as Saebrya struggled in the Idorion.

Back on land, sippers everywhere had been displaced by the ethereal wind, and she saw their bodies crushed against trees, legs and heads and tails torn free, carapaces pulverized by the weight of their peers, the inner fluids of their destroyed bodies dripping in various glowing colors down tree trunks, rocks, or, in her cottage’s case, the side of her house. Sippers of varieties she had never seen before were pulped across every surface, dragged from some impossibly far distance to be pounded to bits along the way.

Seeing that, remembering the violence with which she had been tugged through the water, Saebrya realized that the only reason she hadn’t shared their fate was that the current of the Idorion had caught and held her, even as the ethereal pull had tried to hurl her against the tree trunks of the forest beyond.

Her friend was serving food at the inn, catering to some merchants traveling the Idorion on their way back to Siorus. One gray-haired old man in a corner was surrounded by pooled silver, but that usually meant Ryan had sat and chatted with him in between serving duties. Ordinarily, she would have spent more time making sure, but this time, Saebrya was barely conscious, and it was all she could do to stumble through the common room and into the back to get out of sight.

“Hey Saeby,” Ryan said, coming out of the kitchens balancing platters of steamed fish, “Give me like ten minutes to—” He hesitated upon seeing her, his green eyes going wide. “Saeby?”

Saebrya staggered past him and sat down beside the kitchen’s cooking hearth, shivering, struggling to get warm. Ryan came in to see her a minute later, the platters of fish gone. “Saeby, what happened?” He sounded caught between crestfallen and furious, and the way his big hands were balling into fists, Saebrya had no question in her mind that he was about to go take on the other village boys for hurting her.

“There was a…wind…” Saebrya tried to explain. “It rolled the sippers…” She was having trouble concentrating on anything but the fire.

Ryan immediately looked up at his mom, who was so caught up in baking that she still hadn’t noticed Saebrya’s entrance, then grabbed Saebrya and escorted her out behind the inn, where the grunts of pigs in their pen helped to hide their words.

“You were attacked by a sipper?” he insisted quietly. They still hadn’t told Ryan’s mother of what Saebrya saw everywhere, slinking in plain sight, because Ryan hadn’t thought Mum Omstead could handle it. The land around them, which, aside from the multicolored hues of the dead sippers, was more barren of ethereal liquid than Saebrya had ever seen before, was already starting to collect pools of silver energy from where it had oozed out of the inn. The area around the inn was essentially an energy lakebed—dry after the ethereal storm—that had been carved into the ground by Ryan’s presence for the last nineteen years.

Yet instead of slowing over the years, as she had expected, the odd flow coming from Ryan had increased, until watching Ryan at rest was like watching an artesian well tapped into the earth, gushing enough silver out onto the ground to create a stream furrowed into the ethereal realm if he stayed in one place too long.

“I don’t know where it came from,” Saebrya said. “It bowled me over, wrenched the life-force out of everything, smashed the sippers against trees—would’ve smashed me, too, but I fell into the river.”

“You know, I thought I had a headache earlier,” Ryan said. “Where’d it all go?” After eleven years of sharing her secret between them, the easy way he said it was as casual as if they were talking about the weather.

“North,” Saebrya said. “Toward the mountains.”

Ryan frowned. “The mountains where the Auldhunds live?” Every once in a while, would-be plunderers of Ariod came down the road complaining about the ancient monastery full of Auldhunds that guarded a dead city far to the north, and how they had been robbed of this trinket or that while combing through the wreckage of the ancient war, some even claiming to have made it into the dead city itself before the Auldhunds caught them. Often, they claimed the Auldhunds would break their discoveries right in front of them, or throw the priceless artifacts into the Headsman’s Lake, a place that was rumored to have no bottom.

Shivering, Saebrya somehow found the strength to nod. “I think so. The wind cut across the curve of the Idorion—I think it went straight up the river.”

Ryan’s eyes shifted to her cheek, where her shirt hadn’t been big enough to wrap around her wound. “You’re bleeding.” He hesitated then, seeming to see her profusion of bandages. “Everywhere!”

“It was a storm,” Saebrya said. “Sippers were being thrown across the world.”

“We need to get you a bed,” Ryan said. Then he winced. “Buuut the inn’s full right now, so you gotta use mine.”

Saebrya recoiled in horror—she had seen the disgusting things that crawled in and around that bed—and tried to object, but the motion sent her over the edge, and she felt her eyes roll into the back of her head as her legs went out from under her. Her last conscious thought was that Ryan lunged forward to catch her as she fell, and the lemon-juice feel his essence made when it dribbled into her open wounds.

Support "Shadow of the Spyre"

Bio: a.k.a. Sara King, sci-fi/fantasy/thriller writer from Alaska. Check me out on Amazon or Patreon! Email me at [email protected] to get on my beta-reader list for upcoming work, or just to say hi. :)