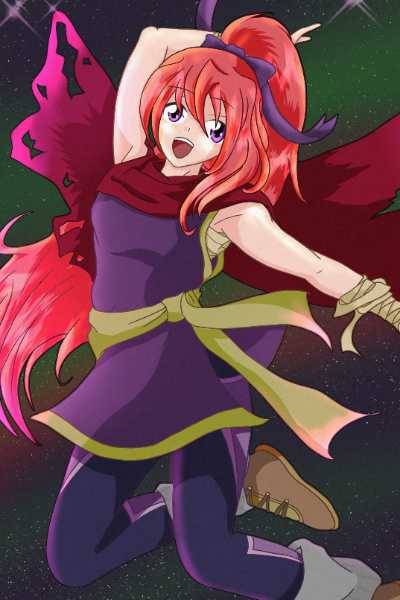 Common sense always recommended that people travel through the forest in groups and stayed together. Even though the pathways were well trodden, it was easy to get lost in this forest shrouded in perpetual mist.

The grass underfoot was yellowing in the heat, not that it ever thrived with all the evil energies permeating the ground. Travellers had to be alert at all times. There was never any way to know if the evil miasma would bring to life the overgrowth, or send the wildlife crazy.

Regardless of all the warnings, Xellie had set off through the forest on her own. Confident in her abilities, she figured that most warnings about the forest were urban legend anyway - People tended to over-exaggerate encounters with demons, or possessed flora and fauna.

And now, it seemed, she had a small amount of regret over that choice.

This was clearly no ordinary demon. Its monstrous visage towered over her, at least double her height. Longer than the anthropomorphic, giant horned demon was tall, he also held an enormous scythe.

The two stared at each other, Xellie’s violet eyes locked with the demon’s. She clutched her dagger tightly, holding it out before her as if she had some hope that it would do anything in the face of this monster.

The demon chuckled at this display of defiance, looking down at her, his face displaying curiosity for a brief second.

It felt as if she’d been facing down this demon for hours, as the miasma took hold and amplified all the feelings she was trying to keep bottled up. Normally cocky and confident, fear began to take over, betrayed by a slight tremble.

The demon swung his scythe downwards. She jumped aside, the scythe barely missing her and instead crashed into the ground.

The demon lifted the weapon into the air, as if it weighed nothing, and swung it at her once more, this time sideways.  Xellie dived onto the ground, feeling the blade swish inches from her red hair. She rolled to one side and jumped to her feet, looking for the scythe.

The demon vanished. She looked around in confusion. Where did he go? He couldn’t have left, surely?

Xellie wasn’t sure what happened next. It felt as if someone had barged into her from behind. She fell on her front to the ground, unable to move. She could hear what sounded like a terrible thunderstorm. Between the crashing of thunder, a voice called out to her.

“My brother is here.” She thought to herself. “Everything will be okay.”

She tried and tried to call back, but she couldn’t understand why her futile attempts to shout for help didn’t work.

The more she tried to call out, the more she began to panic. Could her brother handle this demon? Did he even know she was there? Why couldn’t she move? What was even happening?

That’s when everything went black.